A project log for Improbable AVR -> 8088 substitution for PC/XT

Probability this can work: 98%, working well: 50% A LOT of work, and utterly ridiculous.

long story short [I'm certain I rambled about it quite a bit, here, in the past]...

The CGA card didn't sync via composite with my TV [and not at all with an LCD-TV, showing literally nothing]... ultimately I wound-up switching unlabelled jumpers iteratively, and after 8 of 32 possible combinations, managed to find a setting that worked-ish. I stopped there, as I had other goals...

[This was supposed to be a screen full of red 'A's on a white background. *some* of the wonkiness had to do with improperly timing the ISA bus via an AVR, e.g. the white-on-black portions, but the card itself is responsible for drawing the characters, and those red rows certainly aren't any character I'm familiar with.

Further syncing-wonkiness is better seen below, where I used the normal 8088 configuration and regular ol' BIOS calls to cycle through the colors. Note that red is completely illegible.]

But it was good-nough for the experiments i'd wanted to run [eventually, and quite a bit, running off the AVR].

Recently I remembered a great resource for figuring out jumper settings on unlabeled ISA [etc.] cards... and even though this project's been in storage for some time, I thought I'd see if I could find the proper jumper settings.

BTW, that resource is called "Total Hardware 1999," apparently originally from a company called MicroHouse, and seems to have quite a story behind it, which is why I won't link it here... but look er up. It's *amazingly* handy for old unlabeled hardware.

The key, here, is that my CGA card barely has anything as far as identifying/informative markings.... [image from a previous post].

Look Ma! I can turn the printer port off-n-on! And... that's it. Oh, I know enough about these to identify the Light-Pen connector, too.

So, TH99 has a browsable page full of great art showing boards as line-drawings with identifying features clearly visible.

[Screenshot taken from a company clearly making money off of someone else's hard work, and not even giving as much credit as to just list the name of the original document! BTW, I will not link them, here, either.]

I browsed first by looking at the backplate; surely CGA cards with composite and parallel ports were common...?! Well, only one with a similar configuration, and it happened to be EGA.

Actually, I'm not surprised, the ports are jammed together so tightly, I ultimately wound-up soldering a header and external composite connector.

But, not finding my card in TH99 was kinda disheartening, until I had an idea..

Surely many CGA cards had similar features... at least I could get an idea of what the jumpers *might* do by looking at settings on other cards...

So I opened up new tabs for several cards which had a similar number of jumpers...

And, learned about some settings my card's jumpers *might* configure, like 5x7 vs. 7x7 fonts, or LPT port base-address...

And then I stumbled on thus one... 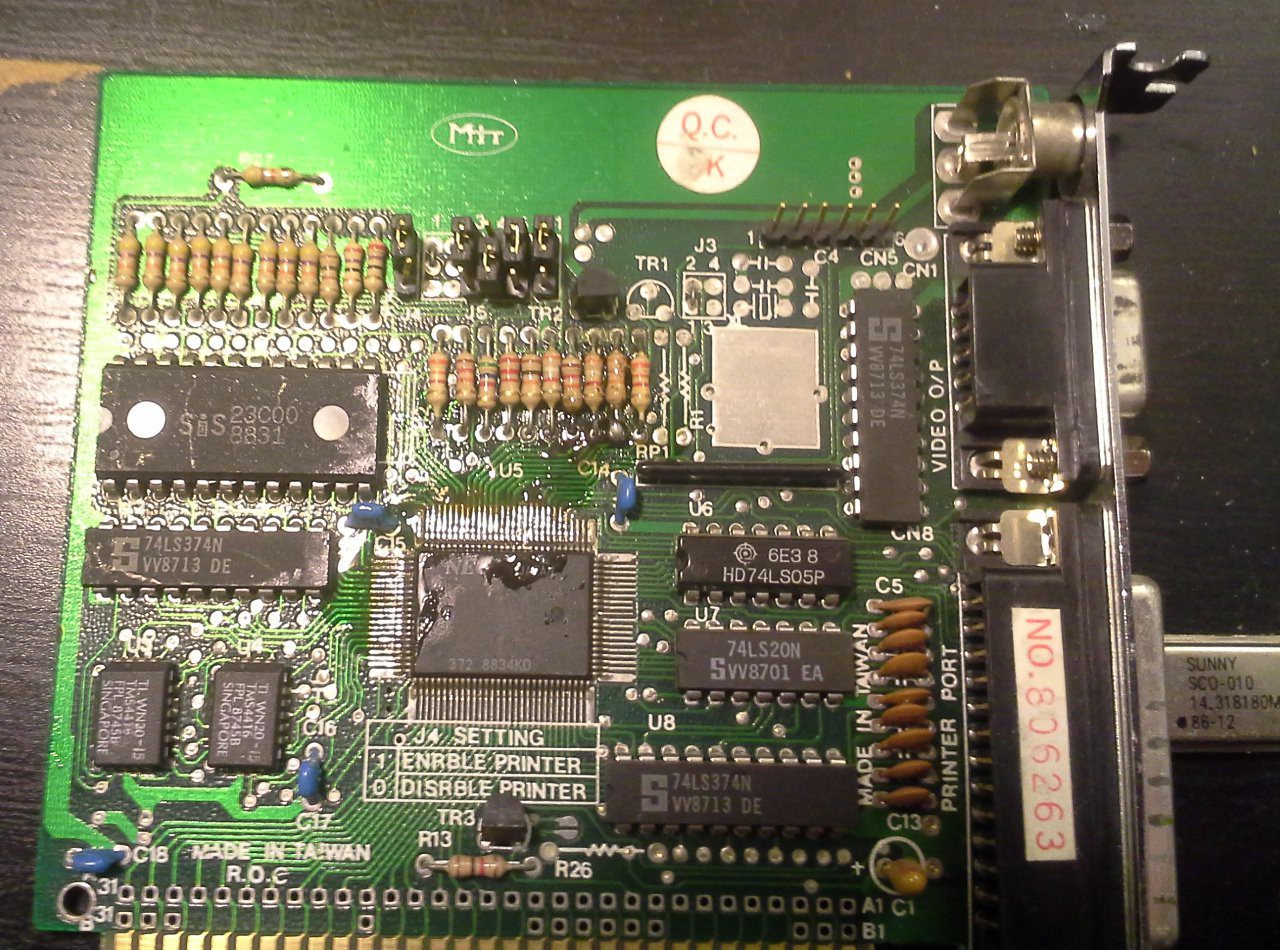 Note my card's connectors and jumpers match in name almost exactly. J5 is labelled 1-5 on mine, rather'n A-E, but otherwise we have what looks to be a darn-near perfect-matching "spinoff," with a couple extra features [RCA and light-pen connectors] and a couple missing/bypassed [jumpers soldered for color mode only, B/W timing circuitry removed].

Further investigation shows the jumper-settings I came up with aren't spec'd... a weird mix of RGB-TTL monitor settings but set to composite output, which might explain the funkiness.

...so... let that be a lesson to ye... when trying to identify a board visually, keep in mind there may be some things missing or extra, maybe, I guess.

[Note, this post mostly for myself, whenever I get to digging this from storage]

Believe it or not...