Most garment making forms lack appendages, especially if they are adjustable. Those with arms normally have them in one position. Fully articulated human forms are available, and are extremely expensive despite the undesirable tradeoffs in form.

PVC pipe, duct tape, and some scrap wood come together with the help of tie wraps and hot glue to form an approximation of the movement and shape of the upper body with arms. The result is a bendable, squeezable object that aids in the creation of technological garments. The extremes of movement of arms and ribcage (for respiration) are featured, and a semi-flexible spine made of Pex tubing allows bending and torsion to some degree.

I use this form to create biometric shirts that fit me. For this I needed a form that was accurate in capturing my dimensions, but was also articulated so that I could test a garment as it undergoes extremes of motion. 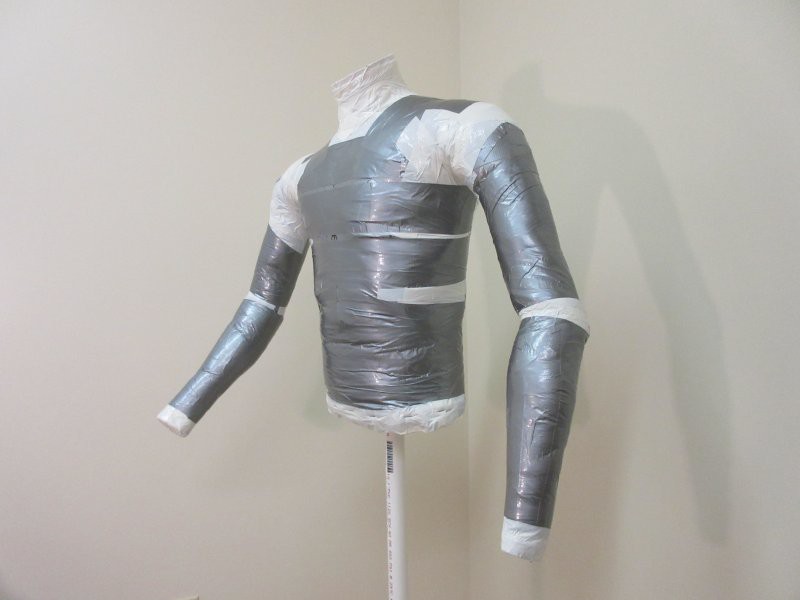 I could not find any good off-the-shelf solution available commercially, at any price. Even very expensive articulated forms (several thousand dollars) were not ideal. Not my size, not my shape, articulated at shoulder but not elbow, solid construction unable to simulate respiration at all, etc.

Since my replicant is still undergoing organ growth and my android is constantly apart while being worked on, the solution I found was to construct an articulated form out of PVC pipe, foam, polyester fiberfill, tie wraps, hot glue, and scrap wood. It was not only inexpensive but it was a fair enough interpretation of my own form that I definitely had some uncanny valley stuff going on while constructing it. It has no robotics in it yet but I may augment it or make a version two, we’ll see. For now, I manually actuate the limbs and compress the chest cavity in testing. It works quite well.

The still pictures are cool, but the videos tell the real story of how limber and bendable (in the right spots) this form is.

I definitely considered body scanning and Meshmixer, as well as lifecasting and so forth, but ultimately I wanted to end up with a covering that acted like skin. I found my answer in duct tape. There were three different kinds of duct tape used, each for their own particular characteristics. Differing amounts of stretch and differing amounts of reinforcing thread allowed judicious use of the different films in specific areas. 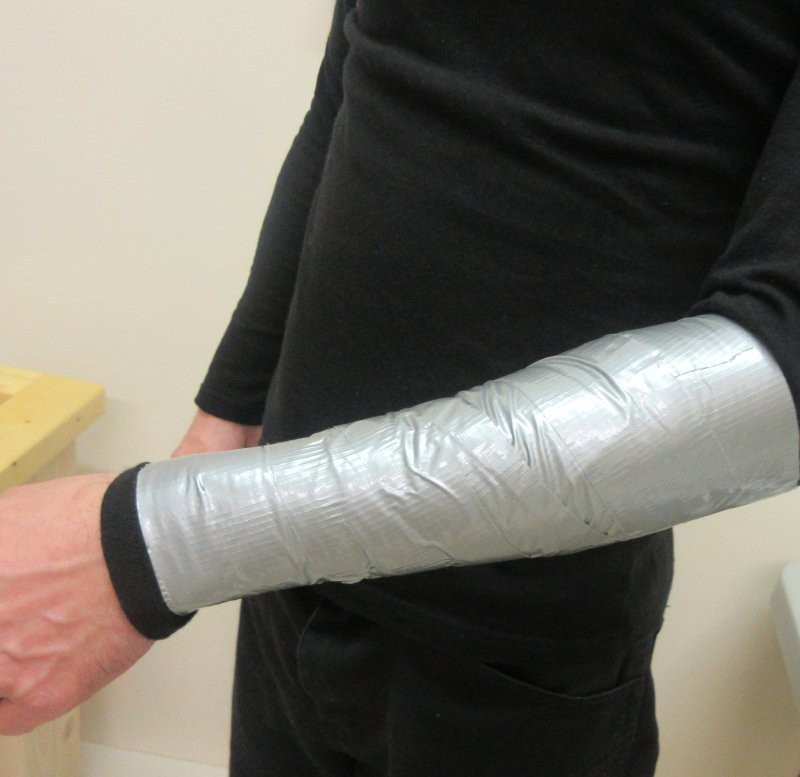 The procedure to capture the form was by just duct taping my upper body as tightly as I could stand, while still being able to breathe normally, wearing a very tight long-sleeved shirt underneath. This resulted in a skin-tight layer of duct tape, and a not-very-flexible tape was used, in order to hold the shape precisely. A neck extension was created in order to reproduce the neck shape.  I avoided taping small areas in the joints for dimensional registration of these important areas.

This shirt was then cut off at the sides and under the arms. A vertical slit part way down the back of the neck allowed my head to get out. Three almost linear cuts in total, and it was therefore easy to align and re-assemble after the fact.  in this photo, the neck split has been taped up, and the little circle indicates a prominent spinal bump, the area of largest spinal inflection in that area, used for spatial registration with the inner form later. 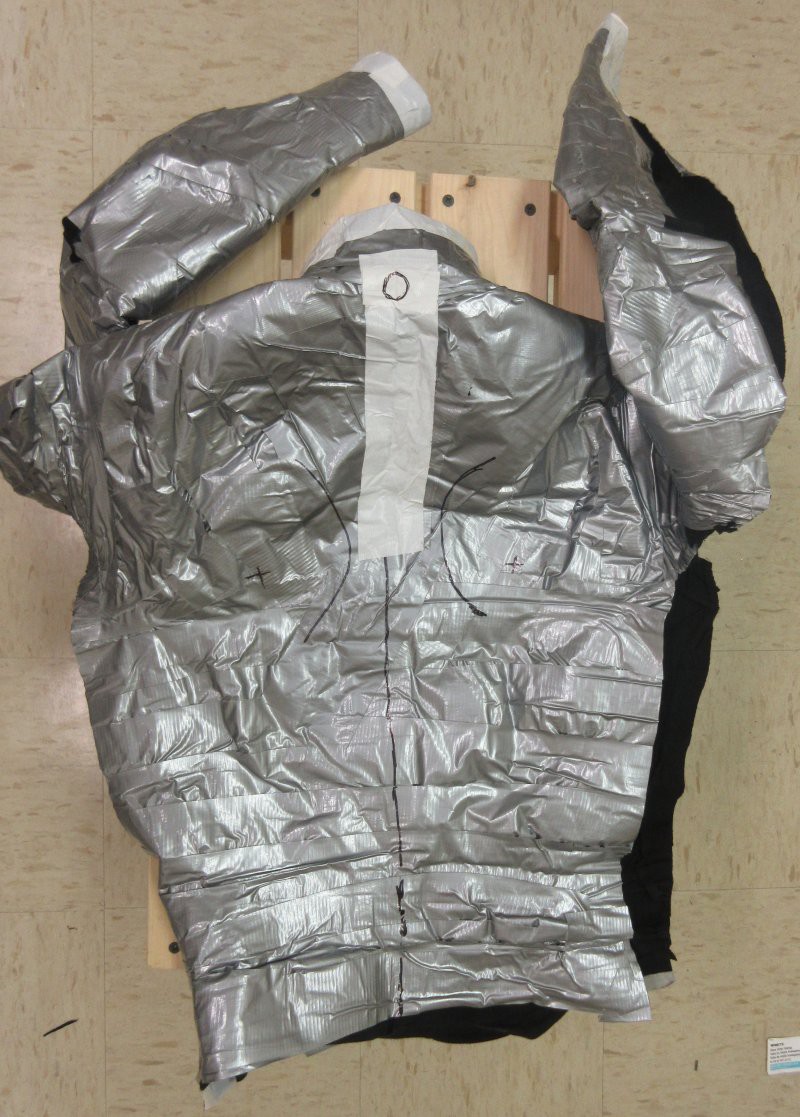 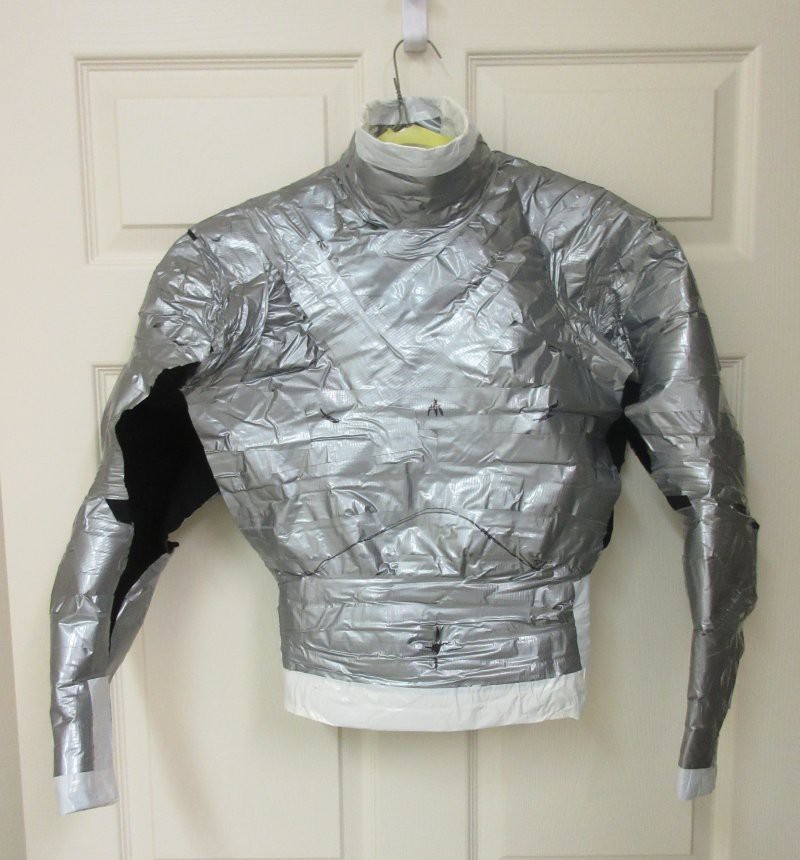 The base was made from scrap wood, arranged around a PVC pipe cut to length such that the torso will be at the correct height when finished. 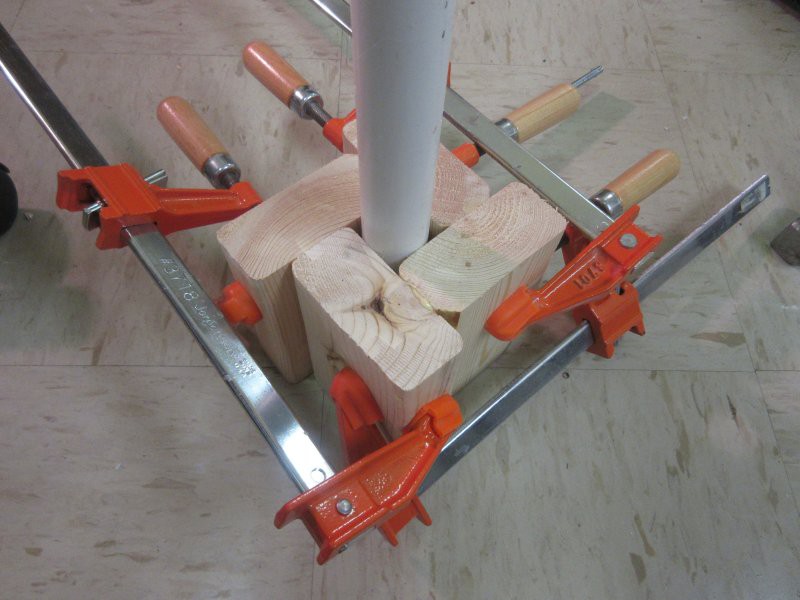 Attached to a base plate: 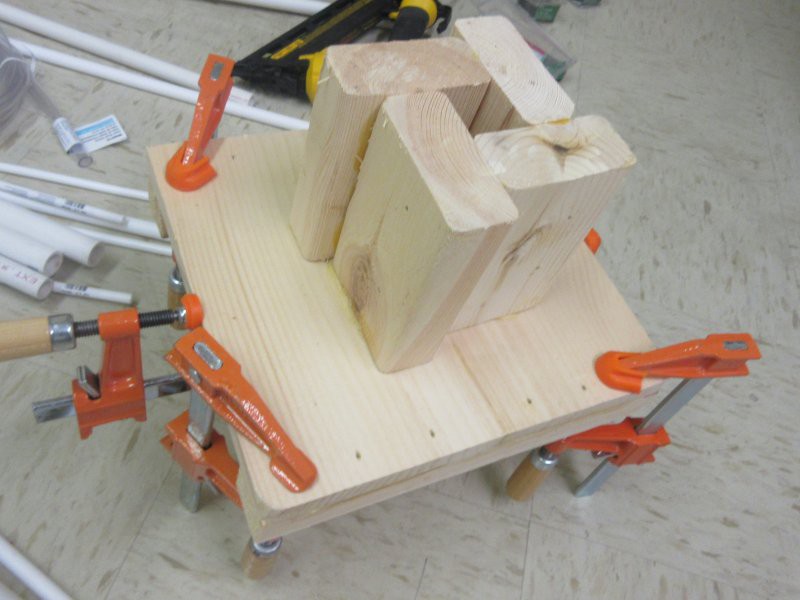 On the torso side, a similar arrangement: 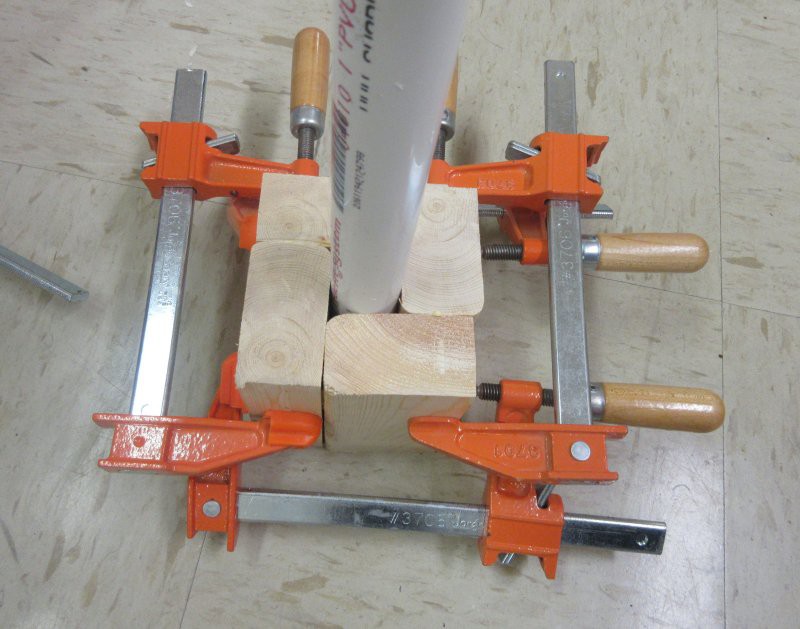 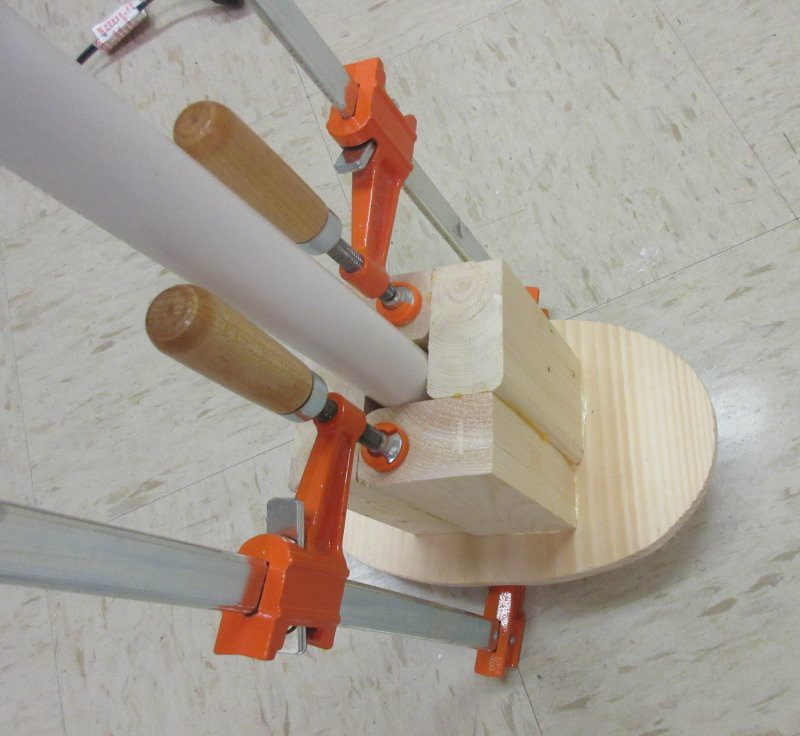 A top cap allows the torso base to swivel on top of the PVC pipe stand, and is solid enough to hold the "skeletal" frame, even while undergoing flexure and torsion. 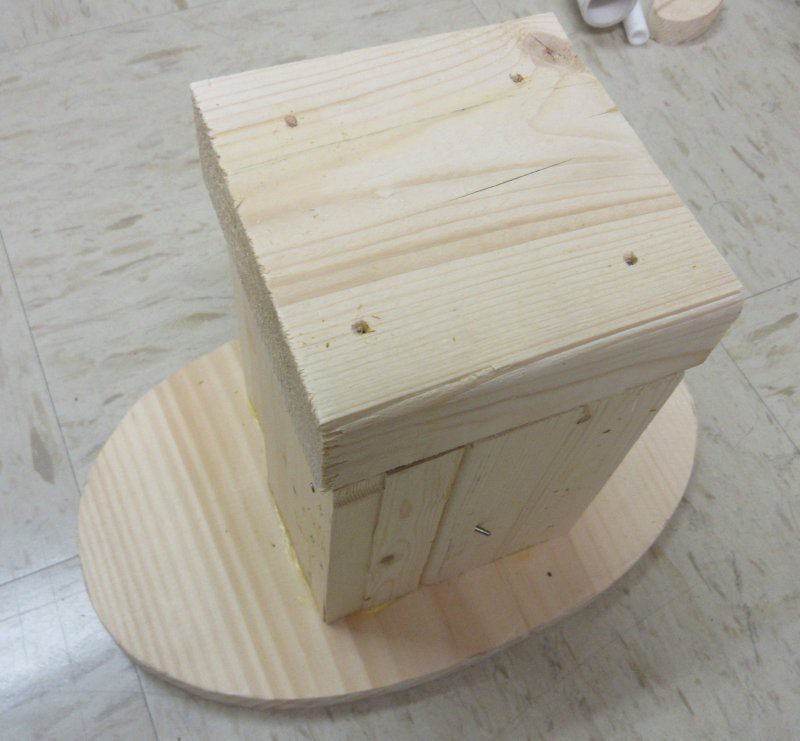 Here is a shot of the floor stand and torso base with a spine attached.  The spine is Pex tubing, which is a lot more flexible than normal PVC pipe.  It can be shaped with a heat gun, in this photo it has not yet been fully shaped, but I put a preliminary shape to it so that I could give it a definite front/back orientation, so that I could attach it firmly to the torso base.  To the right is the Quadralope. 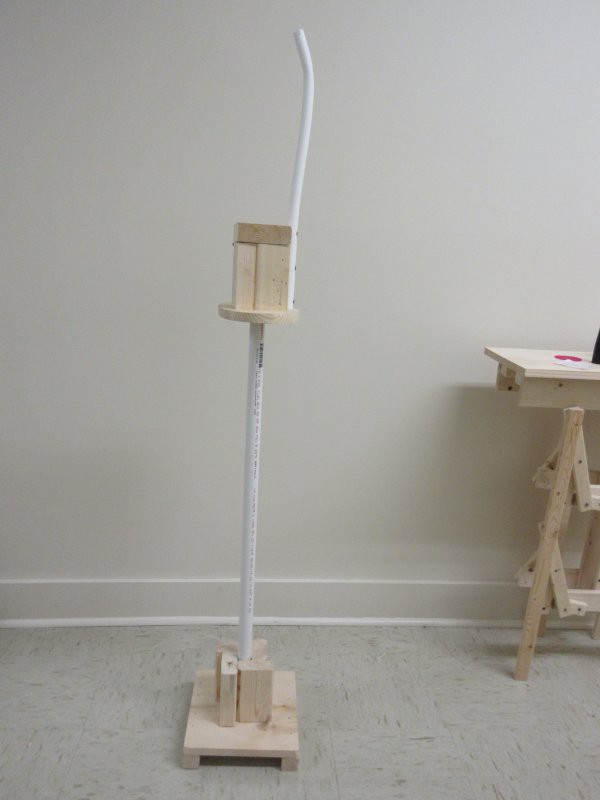 A Pex cross piece for shoulders, and smaller Pex to start creating the ribcage and shoulder blade approximations.  Note, this is not intended to be a 100% true representation of the skeleton.  Instead, it is designed to provide rigidity appropriately - so the shoulder blade tips needed to stick out and push the covering in the same way that my actual shoulder blades push out my skin.  But they are just volumetric placeholders, there are no functional shoulder blades in this form. Note the clear vinyl tubing threaded...

building an optical table to hold gratings, lenses and other optical components for your optics experiments
Project Owner Contributor

I hacked up an Ikea dinner table to make one sweet Lego table.
Project Owner Contributor

This is an attempt at a cheap but rigid CNC machine (budget approx. 2000€)
Project Owner Contributor