This is a two wheeled drive robot which can be accessed online via Googlescripts, spreadsheets, or other apps. It's based on Arduino and the Android platform. An Android phone communicates with the Googlescript via wifi, and the android phones sends commands to the arduino through Bluetooth. Whats unique about this is it is scriptable in real time and programmable via Googlescript which makes coding possible without even having physical access to the robot.

Evolution: I started this project learning about how the electronics (i.e. the H bridge driver) in an RC car works and wondering if I could 'hack' it do use it as a robotics platform. My first attempt at this consisted of basically the same electronics as i have now, minus the Android phone. However, the platform was based on a cheap $5 rc car that I had. What I did was connect the motors up to the motor shield and I was able to drive the rc car around that way: 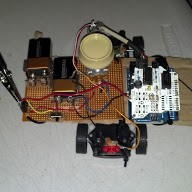 So that was version 1.0. As you can tell, the RC car was too small a platform to really do much with. During this initial build, I learned how to use the LM 317 chip to create a basic power supply board. I learned how bad I was at soldering. Finally, I learned a lot about electronics, which was really fun!

Version 2.0: The next version, is based on the DF Robot 2wd robotics kit and has basically the same electronics as the first version, plus and Android phone and will be connected to Google script via wifi and the internet. This will allow real time control remotely, or it can run in offline or autonomous mode and it is possible to store basic scripting on the android phone so the robot will no how to respond and can follow basic programs when not connected to the internet. Caution: The soldering pictured is bad. I know...The current version is below: 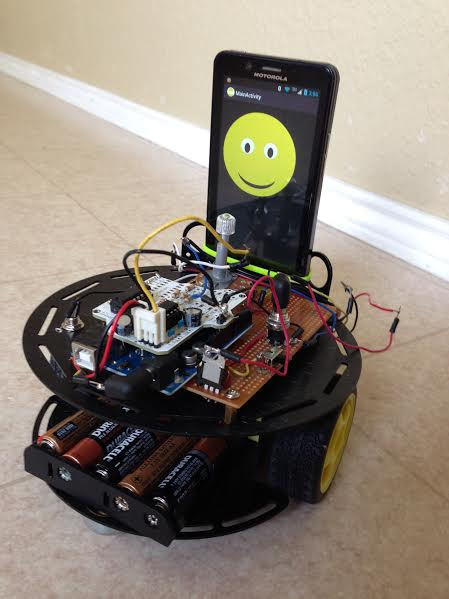 Overview: The Arduino takes its commands from the Android phone via the Seeduino Bluetooth shield. The Android phone connects via wifi to Googlescripts, which in turn control what commands get passed down to the Arduino microcontroller. These commands are sent to the NKC Electronics motor shield (a shield is just a circuit board made with pin-outs to fit into the headers on an Arduino).

This is a high level system diagram: 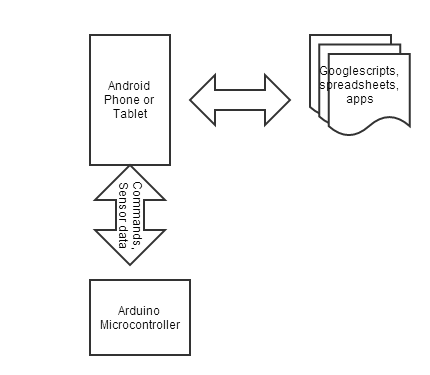