A tiny pixel font rendered to an LCD display, in under 1K program space.

In under 1kB, this project uses a tiny, custom-made pixel font to write a message to a display. It receives messages from the UART and writes them to the display.

The font was created using my homemade small font designer (see external links). It includes all letters (uppercase/lowercase), numbers, and most punctuation. The font weights in at 383 bytes.

The application has the ability to unpack this font, and use it to write a message on an LCD display.

The project was built using a Atmega328pu, and Nokia 5110 LCd display on a Sparkfun dev board.

The board is custom-made (see attached Eagle CAD and images), but the project will function on a Arduino with the same microcontroller. The microcontroller is programmed with a USBTiny.

The software was written in assembly with Atmel Studio 7- initial versions written in C were far too large. 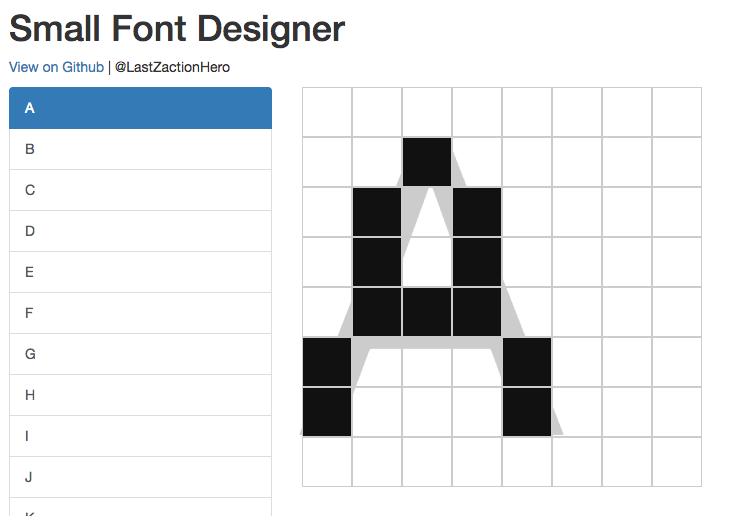 Since each character is 8 pixels tall, each will fit evenly into bytes. The characters are packed to indicate their width, and each active pixel.

After loading the message, the display buffer is written to the LCD via SPI.

Messages are received with the UART at 9600bps. A newline character 0x0A prints the message and resets the buffer. Additional newlines will be inserted by the program during word wrapping.

This example receives messages over Bluetooth, but the source could be anything.

The final program size was determined by pulling the program from flash and checking the bytes.

This is included in "program_map.txt".

The size prefix can at best encode numbers up to, say, 7. Size is never 0 BTW.

Many lowercase letters (a,c,e,m,n,o,s,r,u,w,v,x,z,...) have fewer bits for the higher pixels.
Use the MSB (bit 4 to 7) of the prefix to encode the pixel height, which can further reduce the nuber of bits used by the bitmap :-)

Null terminated means that the font would not be able to handle graphics characters with a gap.  If you are going to waste a byte, use it to specify the width of the font and kerning.  Put that byte first so that you code knows how many data byte and thus can have anything including 0x00 as data.

I don't get it... Why do you have a Null char when you have the width as a run-length information ?

You could save maybe 50 bytes by either removing the null or the runlength prefix, and adding the "null" (inter-char space ?) during the display routine. You could even have a better handling of variable-spacing words so they can exactly fit one line :)

Yup- that will definitely save some space. Didn't connect that I know 'exactly' how many byte the character is already. It will also make my algorithm for skipping to the next letter way easier as well. Thanks for the tip!

To put this into perspective, there are 2 ways to represent a character string :
* C style is NULL terminated (a PITA)
* Pascal style is size-prefixed.

Mixing them is possible, I did it once :-)

However it is redundant...

Knowing this, it was obvious to me that you mixed the representations. I believe that the prefix style is the best because you can put more informations in the prefix than in a NULL byte.

The size information can also be compiled to infer each line's height :-D

Modifying EDID description of the monitor