Why is self-assembly important, and why use Chinese breakouts?

I've been asked these questions a lot. Mostly by people who were wondering why I need to battle with and work around problems of Chinese breakouts instead of laying out all the bits and pieces on the breakout board, and why I just wouldn't put the 2G modem/charger/DC-DC on the back board, with all the benefits it would bring. There are multiple facets to these two questions - they're closely related, and I'll be answering both of them at the same time.

First and foremost, what does self-assembly-capability even mean for ZeroPhone? At the moment, you can assemble your own ZeroPhone independently - without any help from me, without buying parts from me or even contacting me in any way. I do provide advice in case something's unclear or there's a problem, I do sell parts, and I do link people that would like to sell some parts (i.e. PCBs) with people that would like to buy parts - but it's all optional, I publish info on assembly, there's more and more tutorials, guidelines, and videos as time goes on. This isn't really something that a lot of projects do, it requires additional effort and insight, but it's doable. 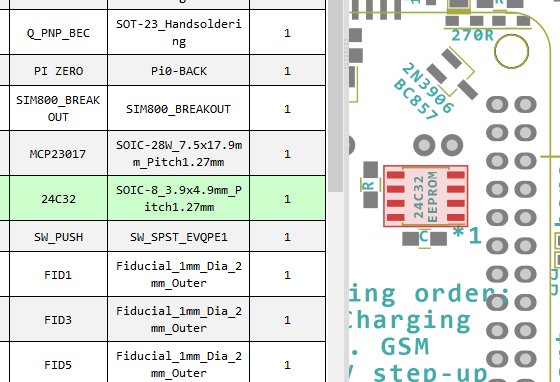 In order to make self-assembly easy, I've picked all the SMD parts so that they're easy to solder to the PCBs using just a soldering iron - as opposed to, say, hot air or oven reflow. Specifically, I've decided on using >=0.8mm pitch SMD ICs and 0805/0603 resistors. For parts that are harder to solder (or source separately), I've used breakouts where possible - SIM800 modem, 1.3" screen (with a tricky FPC cable) and the charging+protection board are all examples of that. I've also did my best to avoid picking parts that are hard to source on eBay and the like. There's only one part that violates both of these guidelines, and that's the TPA2005 - it's harder to source (not always available on eBay) and has 0.5mm pitch, it's only there because I couldn't find any other appropriate amplifier for the GSM speaker which desperately needed some amplification (to work around the fact that the breakout wasn't designed the smart way).

Was the self-assembly capability ever used? Yes, especially after Delta was released - by then, I was sure enough in the hardware and have had compiled a lot of helper materials about it, so I started encouraging people to assemble their own phones (having been more careful about that before). I know of 3 people that assembled their own phones fully (one I've sent parts to, but two others did it on their own), there are 2 or 3 more people that started assembly but haven't finished so far, and 2 more are now sourcing the parts. I'm hoping that, once I publish more detailed SMD assembly instructions (and, consequently, encourage people even more), we'll have even more people assembling their own phones - I like the joy and experience that it seems to bring to people, and I hope it can help more people advance their electronics skills. That is not to take away from the crowdfunded ZeroPhone batch, but to give opportunities for people that want to assemble a ZP themselves, or just want to get a ZeroPhone quicker.

Now, onto the reasoning behind self-assembly. For a start, I think ZeroPhone should be as accessible and get into as many hands as possible. I'm mainly interested in this because of my own background - I know it's a project that I could have assembled earlier on, fully on my own, back when I wasn't as skilled at electronics, soldering and assembly as I am now, but motivated enough to try working on projects that I believed in. I've learned there's plenty of people like that, and I think those people should be able to build their own ZeroPhone if they're so inclined. The BoM (Bill of Materials) comes down to ~$50-~$70 when you source the parts separately (and use some sourcing tricks, i.e. panelization, or buy the PCBs from someone that has them). Even if this is too costly for you (as it used to be for me), you can source parts one at a time and build the ZeroPhone board-by-board - front board first, then back board, thanks to the fact that ZeroPhone front board works with full-size Raspberry Pi boards, and is also the cheapest&easiest to build.

ZP front board tested on the Raspberry Pi 3

One more important thing - hardware dies out. Even larger-scale commercial devices, like Nokia N900, are starting to slowly disappear from local bulletin boards - there were only so many N900s manufactured, most of them are now either long recycled, in some trash pile or in someone's desk drawer - people that want to find replacement parts are pretty much on their own. Hardware becomes obsolete, dies or loses the software support. At some point, it doesn't make sense for the retailers to sell a device, and manufacturers drop its production long before that. Funnily enough, the more popular of an afterlife a certain phone model has, the more expensive it becomes. This effect is even more noticeable with high-complexity DIY projects, like phones or handhelds - they might be open-sourced (and often are), but if the author hasn't bothered to make a manufacturing run of them and keep the production up, you might never have an opportunity to hold one in your hands, much less own and use one. Having a phone that's as open and as straightforward as possible should make it easier for people to repair it long after we've all moved on, helping soften the effect of our fast-paced tech world on people that want stability. I've kept alive multiple devices of mine across these years, I know the motivation behind that and I know it's important.

Back board in-progress independent assembly photo

Another important reason is - I believe in this project, and I want to make sure that it can continue no matter what. ZeroPhone project has the potential of living longer than my capability or interest in working on it. If something were to happen, say, I got badly ill, or dead broke before the crowdfunding and had to get a full-time job without enough time to work on ZeroPhone, or didn't start the crowdfunding campaign for whatever reason, somebody could still keep the project alive without depending on my work. It's possible with other open-hardware projects, but not to the extent that I want to have - the barrier of entry for starting work on an involved hardware-related project is usually pretty hig. My observation is that most projects never get picked up after they're abandoned, and I believe the rate is going to be higher than for software-based projects - unless the project's hardware is easy to reproduce, among other things. Sometimes I wonder if we could consider sites like Github (for software) and Hackaday.io (for hardware) as graveyards for our dead projects, in a way. I guess a major difference would be that those sites can provide a lot of inspiration for upcoming hobbyists and professionals - I could never say the same about graveyards (unless you consider "don't touch capacitors charged with 400V" to be inspirational, in which case I would agree).

Why do I put such importance on this project? Surely I don't work on any of my projects the same way, I don't give them the same level of independence as I'm trying to do with ZeroPhone. To start with, the ZeroPhone project is an example just how easy it is to assemble a phone nowadays, and how quickly one can get in the DIY smartphone scene. It also comes with a sizeable knowledge base, explaining decisions behind the project and documenting the project as it moves forward - these decisions can then be re-used by other projects, be it phone projects, Linux portables or other things that people might decide to make. Last but not least, enough people are interested in this project and like it. So, having the project in "abandoned, but you can easily assemble one" state is significantly better than leaving it in the "abandoned, was never fully finished and sold and therefore is as good as dead" state. Also, I want to set a standard of sorts for other open-source hardware projects - and help them get closer towards that standard, publishing and documenting our helper software as we go.

Why is the self-assembly possibility one of the first priorities? I could've delivered the sourcing guidelines and assembly instructions and everything after the crowdfunding campaign, and we'd have started sooner. However, it's easier to maintain all the instructions than compile it from scratch. When a new revision of PCBs comes out, it's much quicker to copy and adjust a couple of Wiki pages - this is more evident when I look back and see just how much time it took for me to assemble all the instructions. With things I'll have to be solving when crowdfunding is ongoing, I might as well never get there! Plus, writing detailed sourcing and assembly instructions before releasing the project taught me a lot of things I didn't understand about self-assembly - specifically, places where I can optimize the project so that its assembly is even easier (for Delta revision those places were silkscreen markings, better footprints and component choice); that, of course, is going to be important for people that will receive kits.

Same contributor, front board (we were debugging some ESP problems)

As I've discovered through these two years, there are places where self-assembly isn't compatible with larger-scale manufacturing. When I'll be manufacturing kits, I'll be ready to step away from self-assembly-optimised solutions in favor of those that will make the manufacturing process more reliable and assure delivery of kits to those that order it. However, the self-assembly-capable version will remain there, so that people will be capable of assembling ZeroPhone on their own, no matter what happens during production.

Would love to hear your thoughts on that - this is not something that I haven't got a lot of feedback about in surveys and letters, but I'm sure there's something I'm wrong about, or something I'm missing.

Thanks for an inspiring read!