I'm sorry for the lack of code highlighting, especially given that it's crucial in this worklog. It seems to be some kind of Hackaday.io glitch - I hope it'll get fixed soon.

Sometimes, I find interesting articles that explain various network security concepts in a simple way. This week, I've found an article (in Russian, but the part that the snippet is based on is available in English) about UPnP and botnets, with some Python code snippets - and I've decided to build an app around those snippets. As I've built it now, I'm going to describe my app writing workflow - while I still remember it =)

First, SSH into my ZeroPhone and try this snippet (from the article in Russian):

It works and prints stuff! Furthermore, it can be tweaked - the most tweakable value seems to be the timeout value, as that's effectively how long the "scanning" part will be running. Let's convert it into a simple app!

I like to take existing not-yet-bloated apps as a base for new apps - it's a simple "cp apps/old/ apps/new/" The most suitable app for this seems to be the I2C device scan app  - also a snippet that I wrapped into an app =) For day-to-day development, I use tmux - it's very convenient to have dual panes, one with script being edited, one with shell where I run the script.

I'm still running an active SSH session into a ZeroPhone - I'll make it fullscreen, it's easier that way. First, I cd into main pyLCI directory - for me, it's in /root/pyLCI, later on it's probably going to be in /home/pi/pyLCI. Then, I launch tmux, split into two panes vertically - enough to be a good workspace! 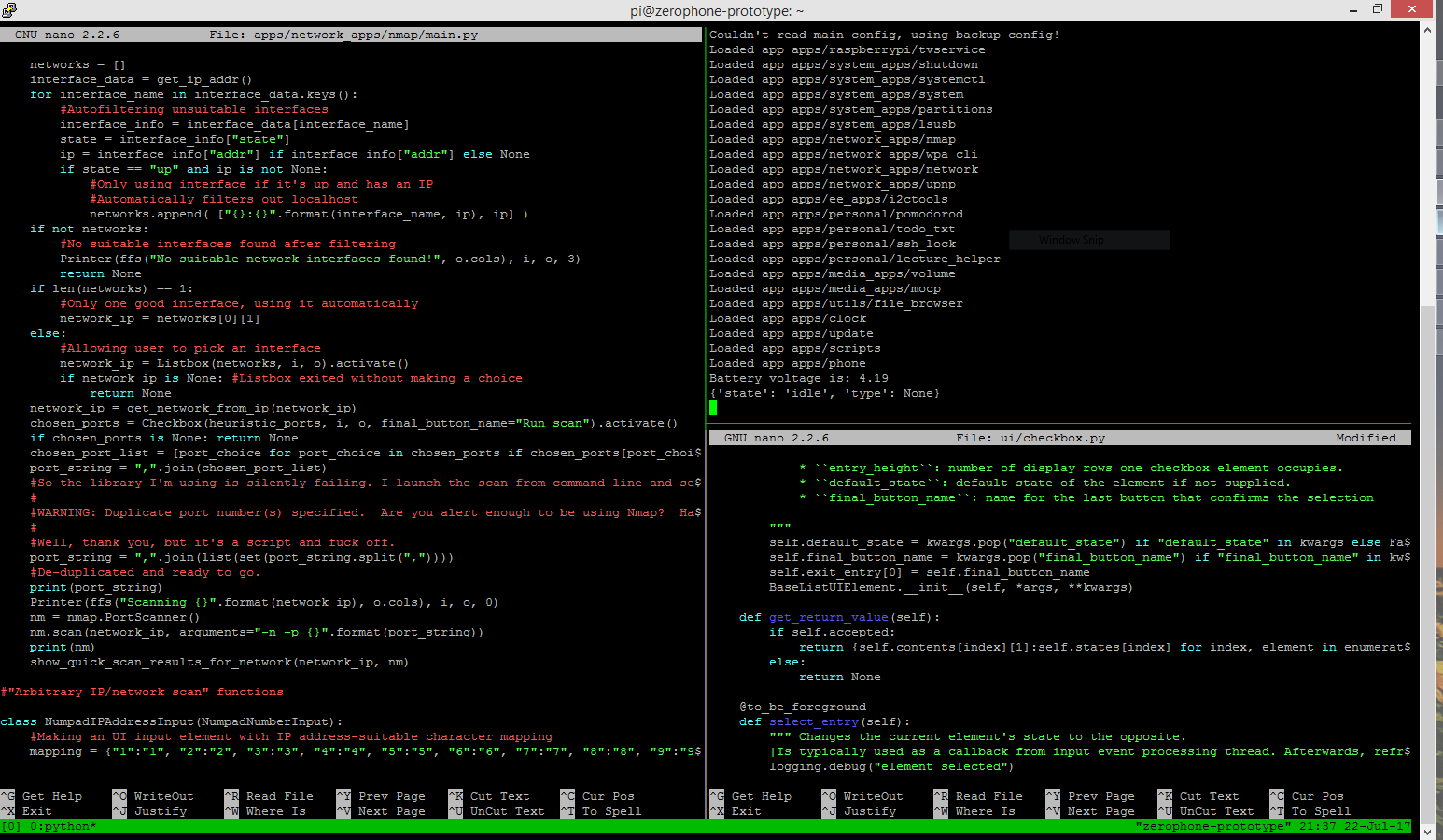 My layout while debugging a small checkbox label-related bug - two nano windows and running code, all in one window

Networking-related apps (even apps that can help with network pentesting) are, for now, stored in apps/network_apps/ directory. So, I create a new directory there - apps/network_apps/nmap. Then, I copy main.py from I2C scan app into that directory, and create an empty __init__.py. Now, if we were to launch it right now, it'd be absolutely the same as I2C scan app - because the code is the same, we just copied it over =) Now, time to edit the code - but first, what are the requirements?

App starts with a menu, so the "callback"  function will look like this:

Our app is not class-based, so we're using a global variable for config storage. I like to use dictionaries for configs, and pack them into JSON - coincidentally, pyLCI offers two functions, read_config(path) and write_config(config, path), that work on JSON-encoded data structures in files.

Now, we need to write something that actually loads the config file. I believe it should be safe to do this as the app is imported, right after the import statements. We need to figure out the correct location relative to the app folder, so that it doesn't load the main "config.json" (with input and output device definitions), but an app-specific one. It's basically boilerplate code, soI published some code snippets on the ZeroPhone Wiki - just copy-paste them into the app =) Also, it has a snippet that detects if config file is missing/malformed - I'll use that one, too, I can just copy-paste it and get some failsafe functionality =)

The "run_scan" function is the only one left. The first part is the same as in the Python script I'm re-making, but I add a Printer() - notice that it runs for 0 seconds, basically, printing text on display and exiting - this is for user-friendliness, so that user knows what the app is doing right now =) Also, some parameters are taken from config, of course - not all of them are editable from the UI, but at least they're changeable using the config file.

Then, let's actually scan the devices. To store scan results, I add an OrderedDict - it feels more user-friendly to output requests in the same order they were received. Also, I print tracebacks any exceptions that were received that aren't socket timeout exceptions -  logging would be a better idea, but for now there isn't a well-defined pyLCI-wide logging facility - so logging will be added once the support is there. Address is also received as a (string, int) tuple (IP, port) - but it only really makes sense to store it as a string, so it's converted to one.

The last part is outputting values to screen. Responses are received as multiple-line HTTP-like requests, and only relatively small part of a request is useful. So, for now it makes sense to just show IPs to the user, and show full request contents if user wants to see them. There's certainly some more useful data in responses that could be displayed, but it'd require parsing the responses - this app was literally written in half an hour's time, so I didn't really think of that as a feature - guess that's a TODO =)

So, I get a list of IPs and I have to show them to user, so that user could click on one, see data, go back, click on another one, see data for that IP - that's a job for a Menu. There's a very similar Listbox UI element that could be used, but it returns immediately when the value is selected, so it's not suitable for this task (you'd implement, say, audio channel selector with a Listbox, but audio settings menu with a Menu.). Right now, each IP address will take one row of characters on screen - if I decide to add more data to the IP view (like, get device make and model from response), I can use entry_height attribute of Menu to be able to show two and more rows of data for each Menu entry.

For menu, you need a list of two-element lists, where first element will be entry representation on the screen, and second element will be a function that'll be called when entry is selected (callback). I like to write small generators for that:

I have one function, and it needs to be called with different arguments, depending on the entry selected - that's a job for lambdas =) Notice the x= , y= trick - lambdas do not create namespaces and don't store values which are passed as arguments, so I have to "store" them this way. Then, I construct a Menu and pass control to it on the spot - that's where user gets the list of IPs on the screen. What's in the read_info function?

It simply shows the request to the user (in the same format that the original snippet did), printing it to console (as a side effect, will remove soon). Notice the ffs("long string with linebreaks", o.cols) - it takes a string and makes a list suitable for on-screen output, splitting it by words where possible and marking linebreaks with empty on-screen lines. I actually think there should be a PrettyPrinter, basically a Printer(ffs(data, ...)...) - maybe I'll do it in spare time (can somebody do it earlier?).

There's this bad thing - there isn't yet an UI element for reading a block of text without interruptions. Printer UI element will eventually exit on its own - after all the screens pass by. I set timeout for each screen to be 5 seconds, but it can easily not be enough for a slow reader, and it isn't as user-friendly anyway. So, such an UI element is in the TODO.

This is pretty much it! We have a working app - it scans for UPnP/SSDP devices and shows any responses it gets. Of course, it's not complete- as of now, it needs some more things to be more useful:

Here are links to the app code - this is the commit I made today, and this is current version of the app at any point of time. Something else?

Give your feedback in the comments, try this app on your network (it's not ZeroPhone-specific, so will work on your Linux PC with a pyLCI emulator), send bug reports and pull requests - all that stuff =) I hope that this writeup will be useful as a tutorial, giving you insights into how to write apps, as well as into decisions involved in making a user-friendly and useful ZeroPhone app.

How to actually make money from ZeroPhones? (a.k.a business plan)