USB-CDC Serial port for PIC18F, in under 1KiB. Refactored down from a USB-DFU bootloader, hand written in assembler to be light and fast

Based on a separate project to build an extensible USB bootloader for the PIC18F microcontroller series. This firmware is the result of combining that bootloader with a USB serial program (or sketch for the Arduino folks) and pruning/refactoring to make it fit in a kilobyte.

Supporting virtually any baudrate from 183 up to a theoretical maximum of 12 megabaud. However, at that rate, USB becomes the bottleneck having only the bandwidth for average 5/8ths duplex, not factoring in USB overhead. In tests it functions reliably at 2 megabaud, and produces any baud rate between 183 and 200,000 with less than 1% error. Above this range, any baud rate produced by dividing 12,000,000 by an integer is possible as long as it is below the tested 2 meg.

USB is a surprisingly involved protocol, so the DFU bootloader alone was 2KB. The CDC support was nearly an additional full KB. Making it fit into 1K was a fun exercise.

Alright, so what does this thing actually do?

It is a USB-CDC compliant serial port. That is, you plug it into USB, and you get old-school serial communications out the other side at 5V for 1, and 0V for 0. It also includes support for RTS/CTS & DSR/DTR signalling. Perhaps the best analogy, is this program does the same job as the widely used FTDI USB/Serial chips.

Perhaps the biggest difference between this chip and FTDI's chips however, is FTDI uses proprietary drivers while this project supports the USB standard CDC device. This allows it to work with the drivers available for Windows/Linux and Macintosh. In my testing, no "inf" files or drivers need to be manually installed. (Though, I've read that this may be different on systems running Windows 8 or newer)

So, is this program 1KB? It's slightly smaller in fact!

Reviewing the end of 1kcdc.lst we see the following: 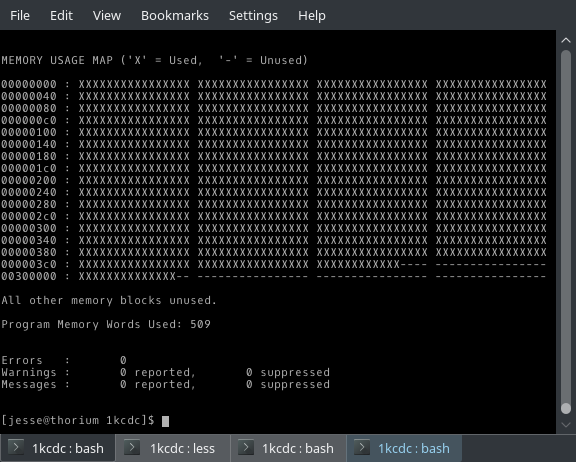 I guess the final question question remains. What is this project missing?

Currently it does not support the following:

This means, aside from BREAK support, that this module only supports serial format 8N1, at baud rates from 183 through 2,000,000.

The PIC serial interface only supports 8 or 9 bit serial. Supporting anything else would require serial transmit/receive in firmware. This would have serious performance implications and I'm not really interested in doing the work to support it.

However, with the 8 to 9 bit serial support, either parity or extra stop bits could be supported. The total number of bits including parity and stop bits would have to equal 8 or 9, but supporting parity is something I've explored as I've seen it used in the field.

And a final shortcoming of the setup, is the way I hacked the baud rate generator. It produces standard baud rates just fine, however some baud rates will not result in the optimal divider. Error in these cases will be quite low, in less than a 10th of a bit per byte sent, but it's a kludge I'd leave out if not for the space constraints.

Big thumbs up for this project.

Did you check 18F26J50 family, or 18F45K50 family MCUs? Is the firmware portable to those? Not sure if there are any substantial differences in USB engines.

I haven't, but it wouldn't take much to check.  I did a little recon on the cheaper 18F chips and was dismayed to see the USB RAM page is different.  There's already some support for that, but the serial buffering code will need a little attention as page 4 is currently hard coded there.

I'll look into the two chips you've mentioned and get back to you.
Many thanks for your support 😀

So I did a little digging on those chips, and they both should work without code changes.  Relevant entries will need to be added to usb-devices.inc for the config registers, but the USB buffer descriptors are in the same place in RAM as the chips I've tested with.  I also specify what chip is being built for in the Makefile, however if you're not using make then that can be skipped.

I'm actually surprised by the specs on the chips you linked.  The 4550 I'm using only has 256 bytes of RAM that's shared with the USB SIE, and 48 bytes of that is taken up by the buffer descriptors.  The 26J50 series actually has over 3KB of shared RAM which would would certainly be useful.  The CDC data buffer size is currently set to 32 bytes for each ping pong buffer for a total of 64 bytes of space.  For high baudrates, increasing this to 64 bytes each might improve throughput, but will require a little more work.

Let me know if you'd like any assistance with getting this running on those chips.