I salvage a lot of lithium-ion cells from old devices, but I don't really know what condition they're in. This device can discharge a battery while monitoring the battery voltage and current. By testing the battery like this, the device can tell you the exact mAh rating of the cell you're using.

I made a simple version of this device using an MSP430 Launchpad and a basic constant current load. Using the USB-Serial capabilities of the MSP430, I sent the battery voltages over time to my PC and logged them to a file. That data can then be used in a program like excel to graph out the battery discharge.

This project now uses an Arduino Nano, as seen in the schematic below: 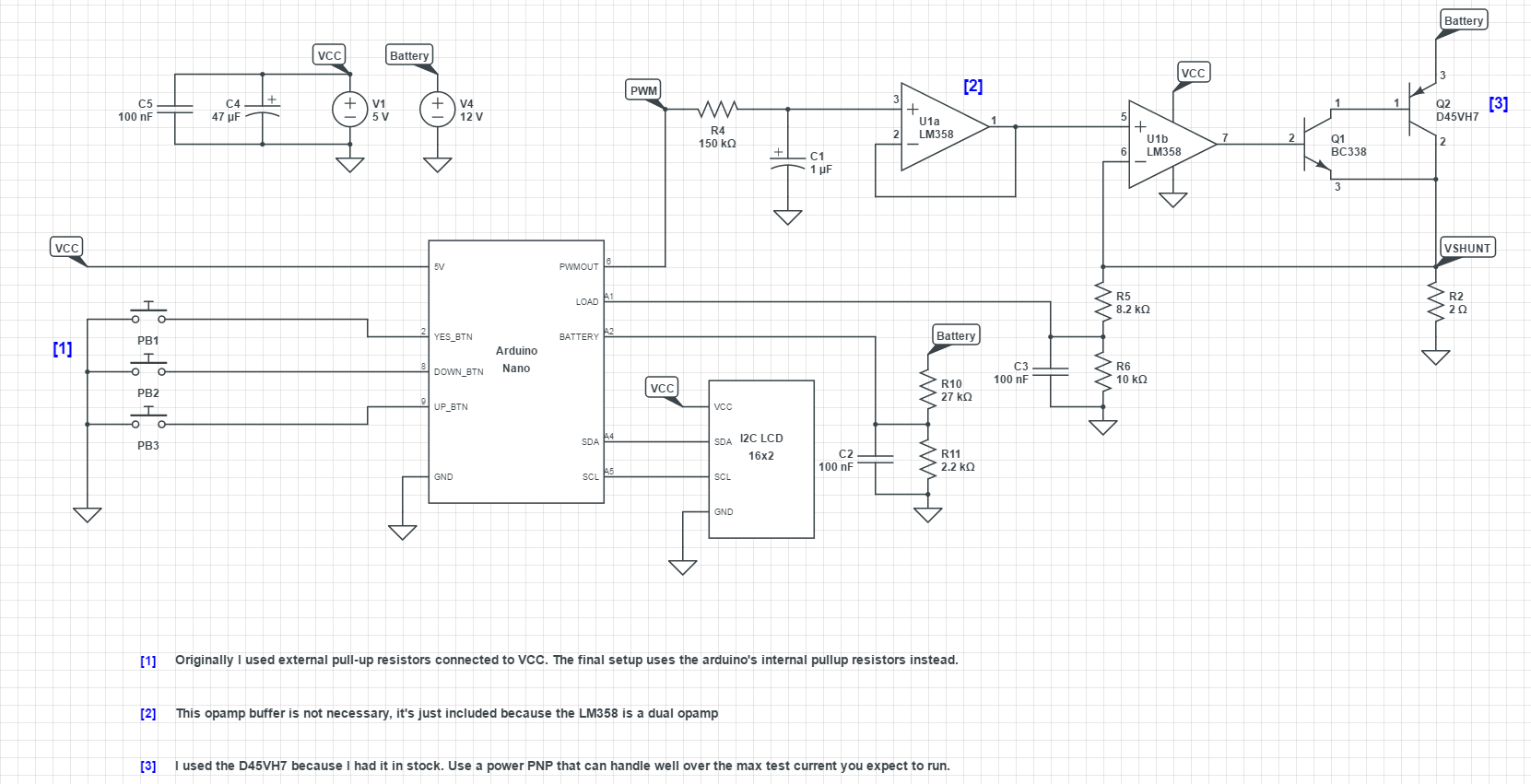 It is shown in the second picture down of:

It is a vented cage to allow the heater wire to breathe.  I had thought of using a fan to keep the temps down, but really have not had a problem yet.  The coils do not glow red except one of the mid range resistance values.  It is only a dull red.

I am looking forward to the posts and source if possible. . .

Nice project! I will likely have to add a fan to my project. The whole thing will be in a metal box which should help somewhat. I will certainly post my code when I'm done. I've tried to write it in a way that makes it easy for someone else to build this project.

Great!  I look forward to the code and the write up.

I like the project. . . Any more updates to your tester?

It has been a while, but I have been working on a 12V battery tester that drains it by pulling around 40 amps.  It switches banks of heater wire in and out of circuit to pull roughly 40 amps.

The LCD addition would be a nice addition to your project.  That is one hang up with the tester I built.  It would be nice to not be tied to a pc, but it is nice to have it automatically dumped into a csv file.

I'm actually almost done my software. I've been making a lot of progress but I was planning to get some things finished before posting an update here.

I have the LCD working pretty well so far. With the addition of a few pushbuttons, you can pick which battery chemistry you're using (LiPo, LiFe and Lead-acid). It also lets you choose how many cells your battery pack has (1-3 cells for LiPo and LiFe, 6 or 12V for lead acid). Finally, you set the discharge current that you want. It then shows you the settings you picked and you can choose to start the test or quit and re-enter the settings.

So right now I have the current and voltage displayed on the screen. I just need to finish the cutoff voltage logic and test it with a power supply, and I'll be ready to test some batteries. During the test you can see elapsed time as well as battery voltage and current draw. When the test is finished the total capacity in mAh and test duration will be shown.

By the way, how do you deal with the heat produced by your heater wire? Most of the heat in my project comes from the big power transistor. Since I plan to put this project in a fairly small box I'm trying to figure out a good way to get rid of all the heat.

Determine the capacity of your battery stash...useful for battery pack and powerwall construction.
Project Owner Contributor