Modular nixie display board based on the soviet Russian IN-12A cold-cathode tubes. 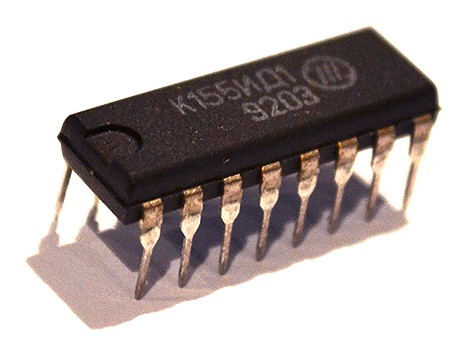 The IN-12A nixie tubes are operated at very high voltages, and microcontrollers can't handle voltages much higher then their VCC voltage. So that the IN-12A's can be controlled by digital logic circuitry, it is required that we have some sort of device that can drive these nixies, but also be able to interface with a microcontroller. The easiest method is a driver that can pull individual cathodes (numbers) to ground. Traditionally a SN74141 BCD(binary coded decimal)-TO-DECIMAL driver/decoder is used. This part is very rare these days, and if you do find one on ebay, it most likely will be second hand, and will cost you an arm and a leg.

An alternative to the SN74141 is the K155ID1, a SN74141 clone made in Russia in the late 80s. The K155ID1 is not as expensive as the SN74141 but, is still quite expensive, at about $2US a piece when purchased in lots of 6 and above. With that in mind, that's about $12US for six nixie drivers when making a six digit clock. As the K155ID1 stopped being manufactured long ago, and the NOS (new old stock) will eventually run dry, prices will go even higher. Because of this I will show an alternative options in a later project log. 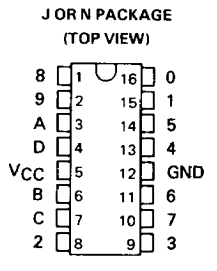 The K155ID1 is a BCD-TO-DECIMAL driver/decoder. How this works is, when a binary value is placed on the A-D (A is the least significant bit or bit 0) input pins, a corresponding output pin with the decimal value name will go LOW. That means that the K155ID1 has ACTIVE LOW outputs. The output pins of the K155ID1 are open collector, so they can pull to ground (LOW), but cannot produce a logic HIGH output. Instead, when a output pin is not LOW, the output is high impedance. Open collector TTL ICs like these are designed to drive loads, not for digital communication. 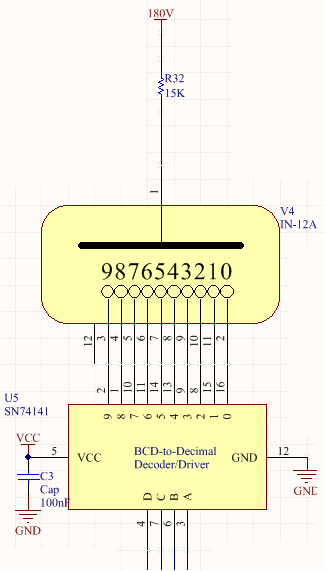 A useful feature of the K155ID1 is, when the binary input goes higher than the decimal range (9), all the outputs become high impedance. This is useful for blanking (turning off) the nixie tube.