This is a gantry design that I came up with about a year ago. I figured out the kinematics and I hope to use it on my next 3d printer. I am going to call it "Haq XY" for now until I can come up with a better name.

If you want a lightweight gantry for your 3d printer or other cnc machine that doesn't have any motors on the gantry itself, there are a couple options. One is the H-Bot/ Core XY mechanism that you can read about here. There is also a pen plotter style mechanism like what is used on the Ultimaker and many plotter designs. Another design is the Sli3DR made famous by RichRap. I am sure there are a couple other kinematic designs out there that I can't think of, but these are the main ones.

The reason I came up with this design is because I have built both an H-Bot and Core-XY printer and although you can get great results with them (My main printer right now is Core-XY), you still need a very rigid/solid gantry to deal with the racking forces. Although Core-XY eliminates most of those racking forces, you still need a rigid gantry to deal with the belt tension. For instance, if one of your belts is slightly tighter than the other, then it will skew the gantry out of square. To overcome this, you usually need to make the x axis very wide and rigid so that it doesn't skew out of alignment. This can increase the weight of the over gantry however.

I also wanted to do something different. I am not always one to re-invent the wheel, but I also don't like to do something that has been done a million times. As far as I know, this gantry design is a new "novel" design; although there is something similar. More on that in the next section.

Has anyone done something similar? 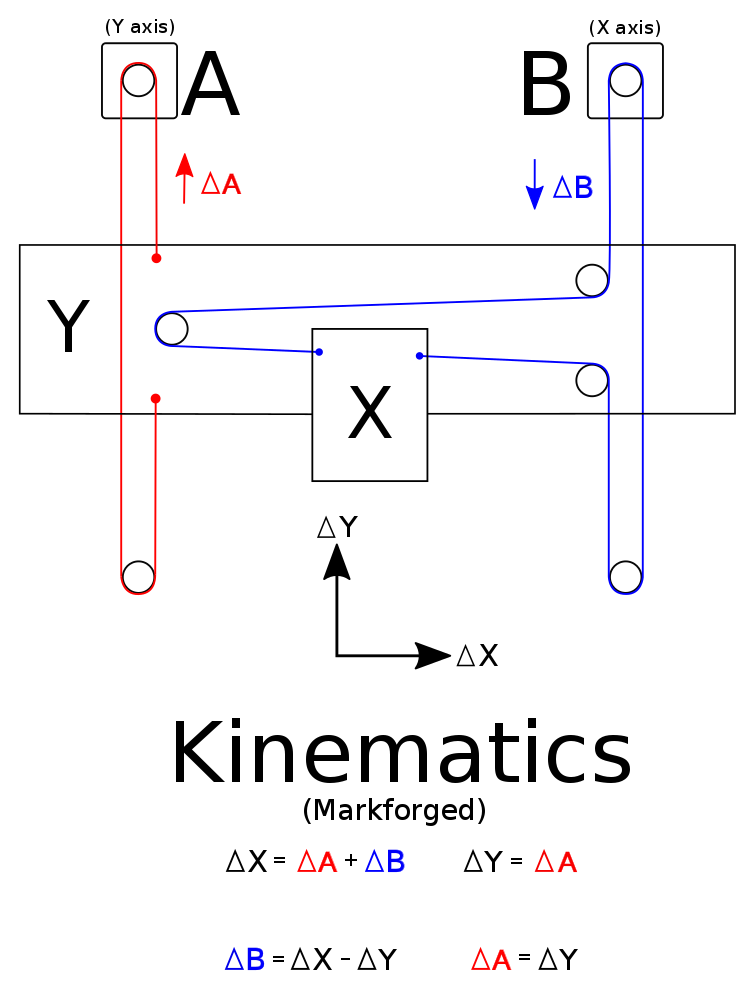 What makes your's different then?

The big difference is that I designed mine to have 2 separate X axis compared to just a single X axis. This will allow either dual extrusion (similar to the BCN Sigma 3d printer) or better yet, 2 separate tools! Imagine having a 3d printer tool head on one, and a Laser on the other, or a color inkjet printhead to color each layers perimeter (plus the top) and create full color 3d models. Another idea is to have a small brushless motor to act as a cnc router to do engraving (pcb's), or to do a finish pass along the important dimensions of the 3d printed model to make it more dimensionally accurate.

Another difference is that in my version the Y axis is designed to be constrained by a belt on both ends of the y axis. Although the Markforged does encounter some racking forces, this design should counter-act those racking forces. It also allows me to have room for a 2nd x axis, which is something I would really like on my next 3d printer. 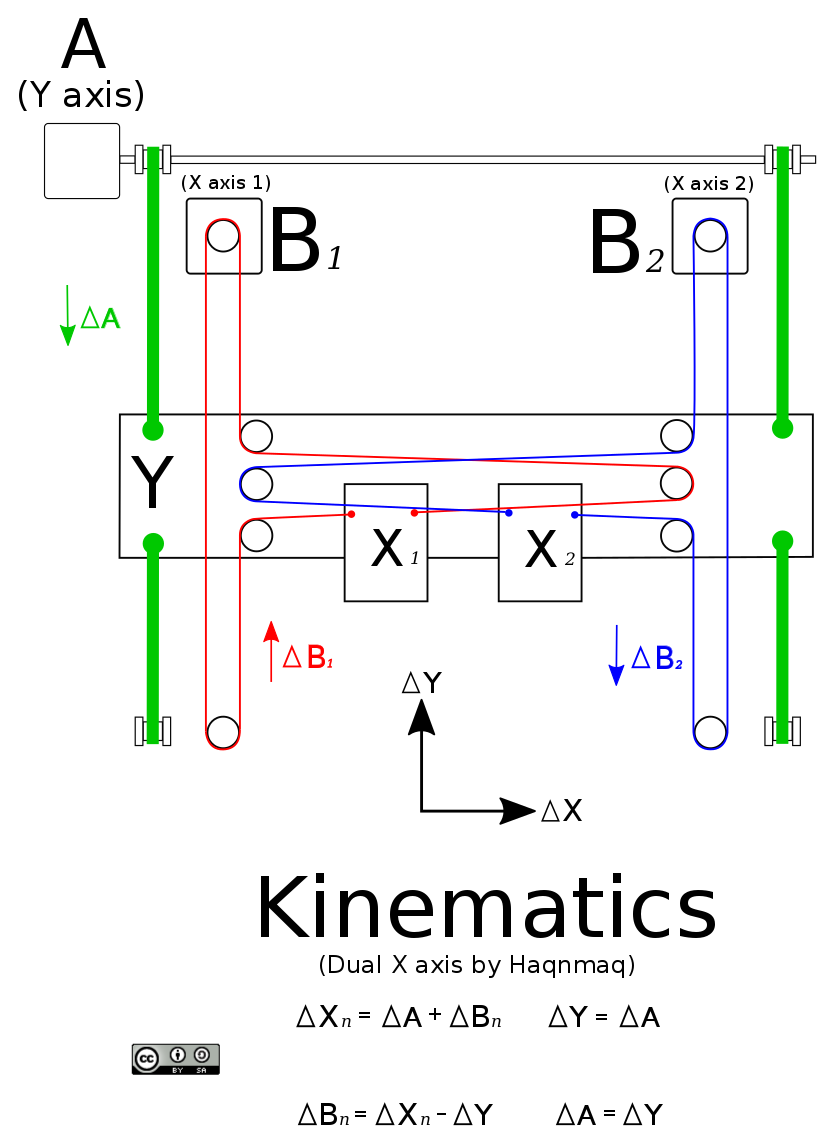 Although I am not building my next printer just yet, I do have a mechanical design drawn out for the gantry and belt path design. In the image above the X axis belt paths overlap, and criss cross. I did this to better show the belt path, not to show how it would really look. In reality the belts B1 and B2 would be at separate heights, and they would not criss cross each other. The idler pulleys on the x axis would also make the belt path be at exact 90 degress angles instead of the weird angle that it is in the diagram.

I was thinking about using Marlin for the firmware. Since these kinematics aren't implemented in any open source 3d printer firmware, I modified the core...

I have printer with this cinematic, can you get link to your source modification?

there will definitely be some racking forces on this type of system especially when you move the X axis alone. The markforged machine uses two linear blocks in series (these make the machine expensive) and has a very small X shaft to reduce this racking effect. This will make the build more expensive. I definitely would like to give it a shot. The racking exists similar to a h-bot and hence you will need expensive linear block. Compared to core xy this will reduce the need to perfectly tension and align both belts. Compared to a Cartesian I feel that the stationary motors are helpful.

Look into this instead of belts: https://www.sdp-si.com/products/Timing-Belts-and-Cables/Synchromesh-Drive-Systems.php

Yeah, I have. I reached out to them to see if they would give some attribution but never got a response. I like the way they did their belt layout.

Awesome! I haven't built anything using these kinematics yet, and I don't have plans too currently. I have too many other projects. How did you implement the kinematics in Marlin? Other people have asked me in the past, but I don't have a printer set up like this to test my Marlin changes.

I HAVE printer with markforged, and additional stepper on X, And independent 2 extruders.

But marlin get error when i add dual x carrege option

I'm also trying to mimic the markforged kinematics.  Can you tell me how to set that up in Marlin?

alpha and beta instead of x and y
Project Owner Contributor