One thing that i often lacked while developing embedded projects is to have a small device which acts as a VT100 compatible terminal emulator to show a debug info on it. It comes especially useful in situations where adding more usb cables, uart converters to your main pc is not possible, difficult or makes the work process uncomfortable.

I had an old RasPi B gathering dust, for which i ordered a 3,95" TFT LCD at elecrow (see the component list for the item ID) a while ago. The seller provides a custom image and a kernel. It will work only on RaspiB/+ and with the supplied Raspian image. The LCD uses an 8bit parallel interface, using up a lot of the IOs, but compared to SPI solutions it offers a much faster update rate. Luckily the UART pins are free to use, after deactivating the console login of course.

Since i have a lot of 9-18V adapters around on my desk, i decided to use a 5V output DC-DC converter module, available from many online sources to power up the RaspberryPi. A Graetz bridge (FWR) is used as a polarity protection, making the input works with both types of DC power jacks (center positive/negative).

A TXS0102 dual channel level translator is used to interface the Pi with the outside world. The output VCC pin is exposed and has to be powered from the target device. The range is 1.65-5.5V DC, which covers most of the uses. The UART port (TX, RX, VCC, GND) is accessible via an IDC6 socket installed on the front side of the enclosure.

I also installed a 4 way USB hub to have the ability to connect a keyboard if i need it.

Since it is a rather old Raspbian image, probably obsolete, i decided the device will not be connected to the internet. Only at the setup time to install all the required packages.

Do not try to run a system update, it will ruin the system and the display won't work anymore. Again, another reason to keep it out of the internet.

After burning the image onto the SD card a few steps are requires to set up out new emulator:

As mentioned previously, the VCC pin on the output UART header should be connected to the target power supply in range of 1.65-5.5V DC. The target VCC sets the output logic level for the internal TXS0102 translator.

Use your favorite VT100 terminal emulator library (ie. BasicTerm for the Arduino world) to send a color coded debug reports from the device you are working on.

PiTERM can be used as a remote UART controlled text display. 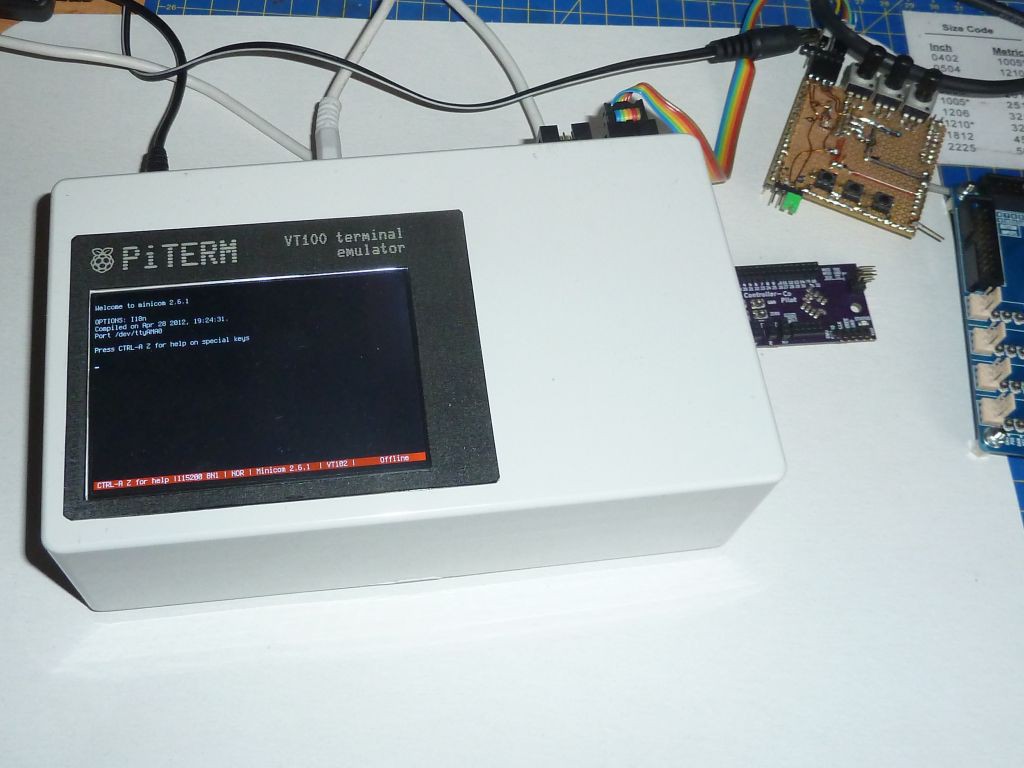 fdufnews mentioned in the comments, that adding a clean shutdown button would be a good idea. Indeed it its!


Pin 13, which corresponds to the GPIO27 is used as button input performing the clean system shutdown. Schematic is updated.


From the software side we need a script that will be waiting, preferably using pin change interrupt, for a falling edge on the GPIO pin followed by about 2 sec button press. If that condition is met, a "sudo halt" command will be executed.


I have used a script created by Luc Small (https://github.com/lucsmall/Raspberry-Pi-Shutdown-Button) , modyfing it to our needs.


First, create a new directory for the script, and enter it:


Create a new script here:with the following content:Luc's code is well commented and should be self explanatory.

Save it by pressing Ctrl+O and Ctrl+X and make it executable:

To make it start at boot and work in the background we need to add it to crontab:At the end of the file add the following line:Ctrl+O & Ctrl+X to save the file. Reboot. Now if you hold down the button for about 2 seconds, the RasPi should perform a clean system shutdown.