This device allows fast and reliable switching between the Solar power and Grid power in my home made Off-Grid Photovoltaic System. (https://hackaday.io/project/2333-my-off-grid-solar-system-monitoring).

It is able to switch up to 6 KVA of power within 20 ms. This allows nearly imperceptible switching between two power sources like Solar power and Grid or Genset power.

When switching occurs, it does not impact, neither your PC nor any other appliances like TV sets and washing machines. You may just observe a faint blink on LED and neon lighting at this very moment.

In case both Triacs are ON at the same time, a source paralleling condition occurs. This means that the Inverter output and the Mains are connected together. This would create a severe short circuit because the inverter is not synchronized with the grid. The result in a damaged inverter.

To avoid source paralleling, an interlock circuit (pink box) is placed between the processor and the triacs. This circuit based on CMOS logic inhibits simultaneous activation of both triacs.


The microcontroller board receives the switching commands through a CAN bus. In my System, these commands are provided by the BMS (Battery Monitoring System).

Three LEDs indicate the operation mode and the selected source.

A manual override Circuit Beaker is usefull in case of failure of the box. 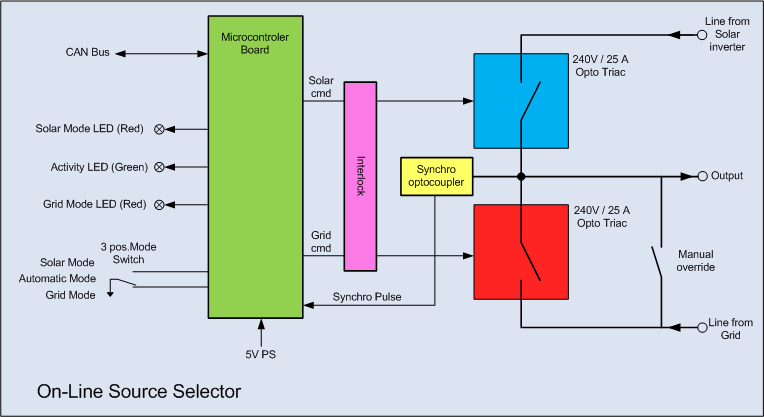 About the Microcontroller Board:

I have chosen an Embedded Artist AOAA board. This board is really fantastic and I was sure, at the beginning that it would have enough I/Os and power to do the job. Of course, this board is overkill and people ask me if such and such board would do the job as well:

1 - Any Arduino or Atmega based board can do the job

Yes, the SW may ask to switch to solar in case of a sudden loss of grid power. But this is not so easy to do - I explain why:

So if the OLSS detects a loss of grid power, it has to ask first to the BMS to switch the inverter ON and then, the OLSS can switch to Solar Power. This will take a few seconds during which your flat will be in the dark...

Once in solar mode, the batteries will be drained. If you do not want to overdischarge them, the BMS should allow using the batteries only for a short amount of time and then shut the inverter down to spare the batteries, whether the grid is back or not.

I thought about implementing this feature, but to my opinion, it is too complicated and dangerous for the battery health for a small benefit. In my area, the grid is very reliable, and failures last for a few minutes generally.

But, as you see, the OLSS Mode Switch allows to go to solar power at any time - So it is always possible to do it manually. But I think this must be a human decision, not a machine based decision.

I hope I have answered your questions.

Very nice. Is it possible to switch automatically from grid to solar on a grid power fail?

A scalable multilayer charging station for 18650, and possibly even other battery types.
Project Owner Contributor