TJ (Thermal Jack) powers and communicates solely through your iOS device's headphones jack (so it needs NO external battery and uses NO wireless communication). This significantly helps to reduce its cost, complexity and size.

TJ will use an Infrared FPA (Focal Plane Array) with an NETD of 0.15°K, a 4 FPS frame rate and a native resolution of 16 x 16 pixels, generating a heat map upscaled at iOS device's native screen resolution by Bicubic Interpolation.

Android and PC are supported too via an USB connection. The USB connection also allows updating the TJ microcontroller firmware. A UART connection will be offered too for low-level interfacing purposes.

TJ is a fully open source / open hardware project and a crowd-funding campaign is expected to be launched late 2014 with the purpose of entering mass-production.

Thermal Imaging technology used to be priced prohibitively outside the budget of hobbyists until recent years. Late 2012 when I started working on my 1st Thermal Imaging project, the lowest cost thermal camera available on the market was the Flir i3 (priced at $995 back then). Moreover, there was (to my knowledge) absolutely no lower cost, open-source alternative solution on the market to these expensive, proprietary devices - that mostly had to do with the high development and manufacturing costs of high/medium performance IR FPAs and lenses and with the timid availability of low cost, low performance IR modules (FPA + lens + ASIC), still not implemented in any low-cost Thermal Imager.

I was therefore highly motivated to explore the possibility of developing a Thermal Imaging platform that was low cost ( < $200 to manufacture)  and could offer sufficient performance for some of the less demanding hobbyist level tasks. That's how I've started working on Thermal Imaging devices.

A bit of background

Then, by means of a stepper-motor controlled pan-tilt platform (that had its rotation axes centered as well as possible to the FPA's surface center in order to simplify pixel position calculations) produce a pattern of controlled sub-pixel shifts (microscanning) of the whole IR module.

The prototype consisted of: 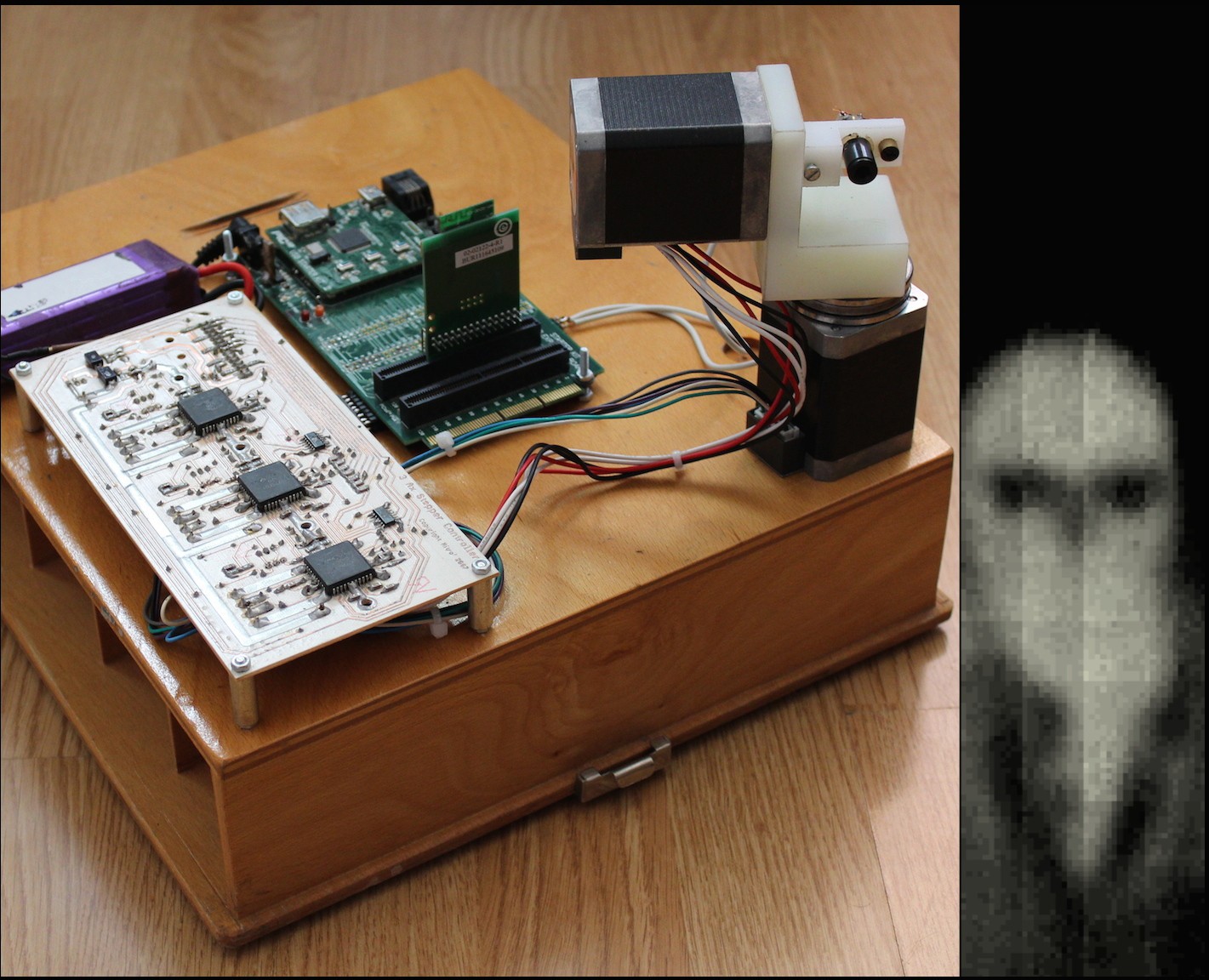 Could also use some auto-image-stitching software for larger images.

A thermal imaging camera is one of those gadgets that would be nice to have for when I need it but are usually way too expensive to buy for the limited amount of use it would get. I hope you keep going with this project. I did a quick search for the Seek Thermal product you mentioned. I see a product on their website at $249 US but near the bottom of the page it states it is not available outside the U.S. via their website. I haven't looked elsewhere for it yet.

Bogdan Chihaia wrote 10/20/2014 at 17:26 • point
Hello Marius Popescu, I'm very interested in your work, and I was wondering if you could help me with a few tips. I'm a biomedical engineer and I am planning to start developing an IR scanner for early skin cancer detection on a low budget. Could you help me?

Marius Popescu wrote 10/20/2014 at 18:48 • point
Hi Bogdan. You should be looking at higher resolution, lower NETD sensors for your intended application. I'm sorry to discourage you but I don't think it can be exactly low budget.

Sure, you can drop me an e-mail with your questions and I'll do my best to help.

Marius Popescu wrote 09/12/2014 at 06:44 • point
I'm fully aware of the Flir Lepton since its announcement! :) Though, different price-point, different performance.

I'll be keeping a close-eye on the groupgets campaign. Maybe I'll join too :)

Jasmine Brackett wrote 08/15/2014 at 22:43 • point
Hello Marius Popescu, now is the time to add a few more details to your project to give it the best chance of going through to the next round of The Hackaday Prize.

Rahul Mascarenhas wrote 08/10/2014 at 15:16 • point
Great project!! What are the average values of current/power that the power harvesting circuit manages to output?

Thanks! Yeah, I've just checked Digikey now and indeed their stock is 0... weird. But you can still buy this dev-kit if you need it for prototyping only: http://www.digikey.com/product-search/en/programmers-development-systems/evaluation-boards-sensors/2622557?k=amg8831

I've only needed 1 piece for evaluation and the unit was ordered directly from Panasonic Japan through Avnet Abacus (Europe). In Europe it's much more complicated to source than in US (due to it's Dual Use nature...)

peter jansen wrote 08/10/2014 at 22:39 • point
Thanks! I asked Digikey when they'd expect them back in stock and they sent me a quote for 1000 with an expected delivery of around December, so I'm guessing regardless of their characteristics these likely wouldn't be a good choice for either of us. I'll let you know if I hear differently or find a source!

Erik Beall wrote 08/06/2014 at 23:40 • point
Hi Marius,
very nice project, and the image you created with your micro-scanned MLX90620 is amazing for that sensor. Scanning and stitching with good spatial accuracy is impressive!

I saw the comment about the price - I actually paid $1200 for my first 64x62. I do have some help to get the price down and we will be at-cost. Also the lens is probably different (we are using Germanium but they can do many different lenses - they have an in-house lens designer).

Good luck with your project! Using a audio hijack interface is a great idea to get power and data.

Thanks for your appreciation!

Yeah, I was really intrigued by HemaImager's asking price so I couldn't help but ask Heimann Sensor for a quotation :)

Anyway, if you can sell considerably under Flir One asking price and still make a healthy profit, then you got a winning ticket there!

Wish you all the best with the Kickstarter campaign! I'll be following closely :)

Marius Popescu wrote 08/05/2014 at 08:42 • point
I've just been on the phone with a Heimann Sensor representative and I've got the following quotation:

So they're either getting a much better deal or they're probably selling on loss, at least for the Kickstarter campaing :)

In the kickstarter they also say that for the first 50 units they've been offered a special price, though not for the whole 800 units.

For the 82x62 the representative couldn't give me a quotation at this time.

I am familiar with Heimann Sensor IR Array products and followed their progress for a long time, although I'm still puzzled how they're able to get the 64x62 IR arrays for so low...

There's a doc. on Boston Electronics website that quotes the 64x62 IR Array at $1018: http://www.boselec.com/products/documents/HeimannArrays5-10-13.pdf

This makes me so curious that I'll probably give Heimann Sensor a call later today to ask for a quotation on the 64x62 and the 82x62 :)

By the way the 82x62 developed by Heimann Sensor is mass-produced (and also sold) by Bosch Semiconductor as SMO130: http://www.bosch-semiconductors.de/media/pdf_1/press_releases/SMO130_Productinfo_1402.pdf

Noman wrote 07/25/2014 at 15:11 • point
Cool. Marius, congrats for working out such low cost thermal imagery. I wonder why you have not opted for BLE/Techbasic way for IOS?

Marius Popescu wrote 07/25/2014 at 15:19 • point
Thank you! I went this way to make interfacing as cost-effective as possible. Another reason is convenience (needs no battery; you plug it in and it's ready for use)

Mike Szczys wrote 07/23/2014 at 15:25 • point
Wow... an order of magnitude cost reduction for this tool, fantastic! Can't wait to see where you end up with this one since the preliminary results are very promising!

Stay tuned for the Gen1 prototype (hopefully early August). It's expected to offer much better performance!

David Cook wrote 07/21/2014 at 00:58 • point
I'm giving you a skull just the courage to post photos of your gnarly free-form soldering of SMT components!!

Seriously, though -- a very interesting project. Best of luck to you!

Well, that's how it looks like when you decide on a Friday night that you need a hw prototype :)

Comparison of four most popular wireless communication technologies based on both specification and real life measurements.
Project Owner Contributor

rail.X : monitoring railroad crossings for you