In this project I will be making a BB-8 robot from Star Wars that is controlled by your Android smartphone. BB-8 can move and talk!

*BUILD CURRENTLY UNDER CONSTRUCTION *BB-8's design has fascinated just about every single Star Wars fan out there since Star Wars: The Force Awakens was released. I was so fascinated I decided to follow a tutorial seen here: http://www.instructables.com/id/DIY-Life-Size-Phone-Controlled-BB8-Droid/ although I am following a tutorial, I just want to assure everyone reading this that my project is in no way a replica of the tutorial above. I have modified it to my own preferences and I am also adding my own personal touch.When I am finished with this project BB-8 will be able to roll around, move his head, listen, and talk. My phone will be able to control BB-8's ability to move around and move his head, while my voice will trigger a Raspberry Pi to listen to my questions and answer them (I will put a voice assistant similar to Siri on the

Let's go over some of the features and science behind BB-8:

So as you all know, BB-8’s head stays upright while his body is able to roll, which baffled me for a long time until I figured out how it works. Now, there are many ways to get his head to stay In place such as wheels on the head attached to a gyroscope, but that is much too complicated and pricey, so i went with a design that worked great, was cheap, and functioned properly much like this one 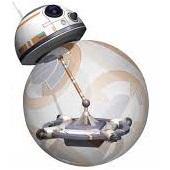 This design uses a base in the body that has ball bearings that keeps the base flat even when the body rolls, and motors attached to wheels that propel the body in a direction. Attached to the body is a rod-like thing (on my design it’s perpendicular to the floor) that has two neodymium magnets attached o it at the top. In the head there are magnets that are attracted to the neodymium magnets in the body, and since the base stays straight, the magnets (which are attached to the base via the rod) keep the head upright.

Too me it’s all very fascinating, but what makes it even better is that I can make this for pretty cheap (considering the official Sphero one is $150 and fits in the palm of your hand)!

On the brainy side of things, i'm going with an Arduino Uno to control the motors of my droid, although in version two i'll probably switch to a raspberry pi. For batteries I went with a 6,000 mAh, 12 rechargeable battery that should provide a good amount of juice to the bucket head. Although ball-bearings would be nice, they are pretty pricy, so to stay on the budget side of things i'm going to use some roll-on deodorants instead of ball-bearings, making this one of the freshest projects on all of Hackaday! And lastly for the base i'm using some strong cardboard I had lying around.

All items I have not mentioned will be listed in the components section.

BT-1 was introduced in the Star Wars Darth Vader comic books as a twisted mirror version of R2-D2. BT-1 is the first and only Blastomech.
Project Owner Contributor

A replacement motherboard for the Gameboy Advance
Project Owner Contributor

Official Hackaday Prize Entry
Project R(rrrr) is a low-budget research robot for the rest of us.
Project Owner Contributor