Last Halloween my oldest son Colin dressed up as the Doctor from Doctor Who and I cobbled together a Sonic Screwdriver for him from bits of junk I scrounged up in the garage. Upon seeing the Sonic Screwdriver my youngest son Sam decided he absolutely had to have one. Sam however declared that his screwdriver needed to work- he wanted more than just a cool looking prop.

He wanted a functional Sonic Screwdriver.

The neat thing about this project is you can easily tailor it to include all different kids of sensors to learn about the world around you. Inexpensive accelerometers, altitude sensors, barometric pressure sensors, GPS sensors, etc. are all readily available and you can make a custom Sonic Screwdriver to house whatever sensors you want.

"They're scientific instruments, not water pistols!"

With the War Doctor's words in mind we decided that it would be really neat if Sam's screwdriver could monitor temperature and humidity and save the data to a micro SD card as well as display the temperature via a RGB LED. Sam has two hermit crabs (named Pickles and Sherman) and he thought it would be cool to be able to measure the temperature and humidity of their habitat... He also thought a flashlight function would come in handy (good for reading books under the covers) and of course it had to make a neat sound and have a big blue light on the tip for the "sonic" function. Since we were going to use a photocell to turn on the flashlight it was decided to log that data as well as the pressure on the force sensitive resistor pad that activates the blue light and sound.

While you could certainly 3d print the screwdriver body (a good option if you don't have access to a lathe) we wanted to make it out of metal- Sam's exact words were "It needs to be metal!" We thought about using a metal tube for the main part of the body but I thought the wood body would look cool and provide a nice contrast to the Aluminum end pieces. I needed a way to hold the force sensitive resistor and photocell in place so I decided to make brass pieces to mount them to the wood body. Turned brass pieces also provided a nice contrast for the LED end caps.

A couple of quick design sketches were made- 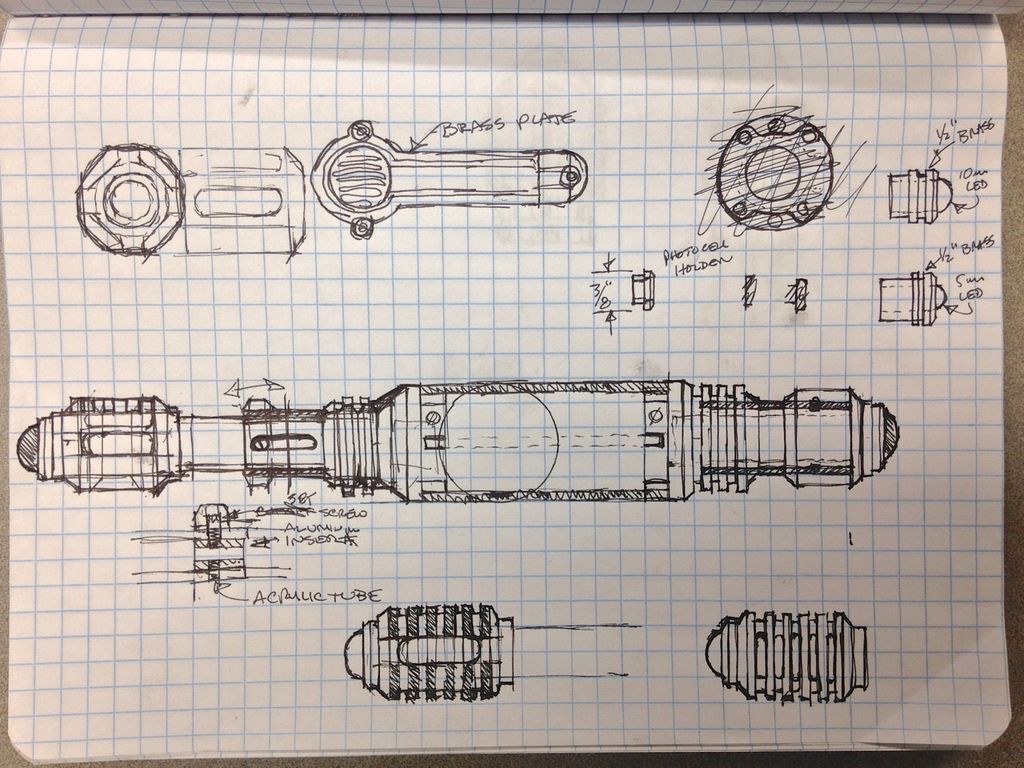 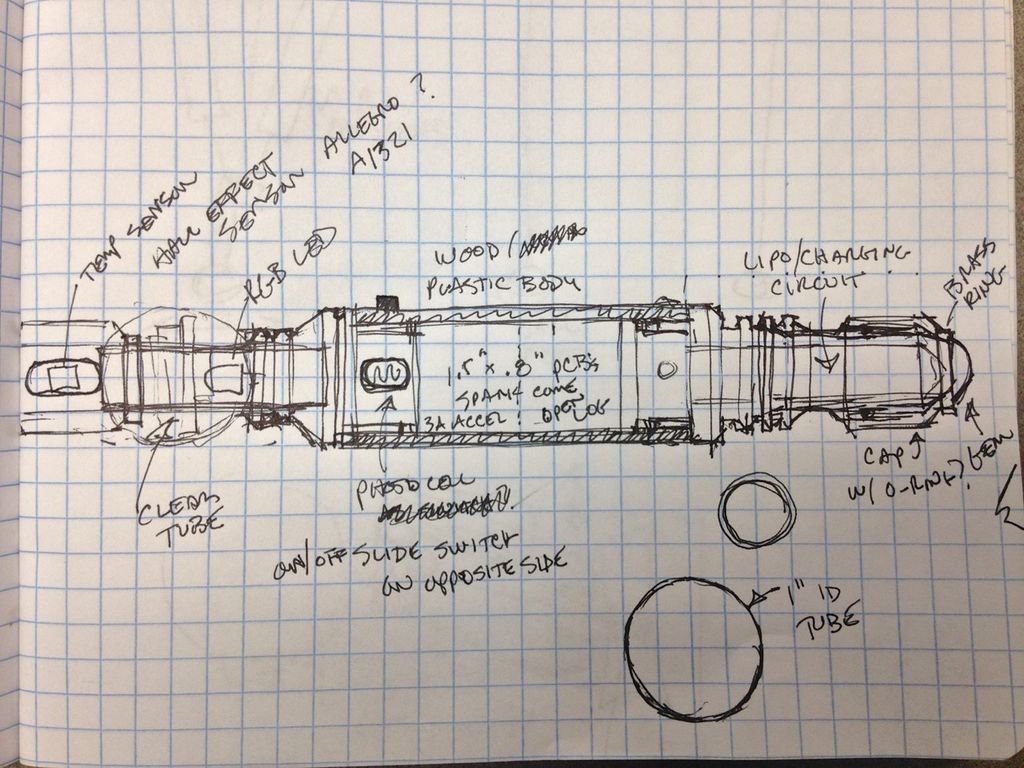 Once we settled on electronics/sensors I made a wiring diagram- 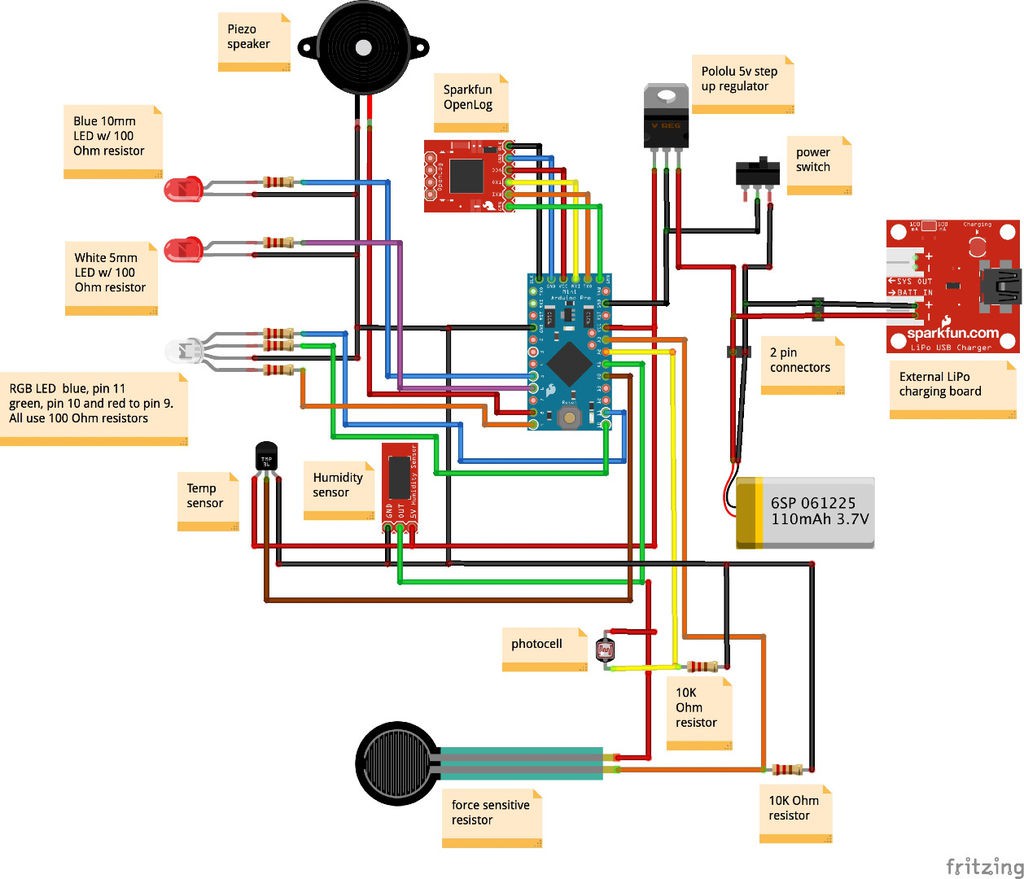 This is amazing, I'm really impressed with both the custom construction and the electronics coming together in this small form factor!

Would it be possible to replace the open logger with a similar sized wifi board and have it push out it's readings that way, or would that blow the power budget?

Thanks so much! Yep, there's no reason why you couldn't do that. One of the ESP8266 boards or a Particle Photon would do the job. It wouldn't run as long with WiFi on but I think the Photon supports a deep sleep mode.

Wow, this is incredible. The details make it far better than any prop. Excellent work.

This is beautiful, well done :)

We recently made a 555 LED Dice Kit and made a full tutorial and video walk through.
Project Owner Contributor

Playing with FLORA and Neopixels

The Healing Heart is a conflict-resolution tool which teaches children to apologize in a way far superior to most adults.
Project Owner Contributor