A project log for DIY Climate Control at your finger tips: WiFi XBee

Most homes have rooms that are too hot or cold and waste power. This project is an open source/community to solve that problem thru zoning.

We are going to be at the Maker Faire Orlando September 13 -14, come by and say hello.

Decided for this prototype to go with Flexdampers and vender found for valves. See http://www.retrozone.com/oldsite/Catalog/flex_dampers.htm.

Control the HVAC using only one sensor box. This allowed a portable sensor box and was very successful keeping the right temperature where you put the box.

PCB made for remote sensor box, enough parts for 100 boxes were purchased. 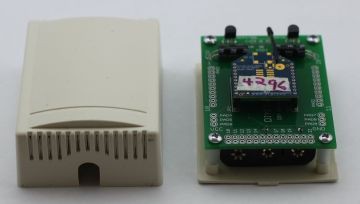 Started design for PCB for remote sensor box. Learning how to use Eagle.

First steps of the website were started. Learning how to do WordPress sites.

Stopped working project while working on contracts. Needed to bring home the bacon.

Started with controlling the vents in code.

Took out using XBees communication between UNOs and used I2C instead.

Having memory problems code had to be adjusted and arrays more compact.

Allow multiple temperatures reporting from each XBee. This allows the reading of the HVAC unit for safety reason that the HVAC unit will not freeze.

First of the code made XBees talking to one another.

Late 2012 project was conceived and work was started.