The device uses an array of piezoelectric vibration sensors and an ARM microcontroller (LPC1114) to determine the origin of a vibration on a table or wall. The location of the vibration could be used as a mouse input for a computer, a location-dependent button, or any number of other things. The final version may have a USB HID interface to connect to a computer as a mouse.

My device consists of three main parts: the piezoelectric vibrations sensors, some analog signal conditioning circuitry, and the microcontroller. The microcontroller detects vibrations from the signal it receives from the analog portion of the circuit, records the times those vibrations arrive, and sends them to a computer for processing. The processing is done on the computer because while the math involved can be solved very quickly on a personal computer, it would bog down the microcontroller too much to be latency-free. 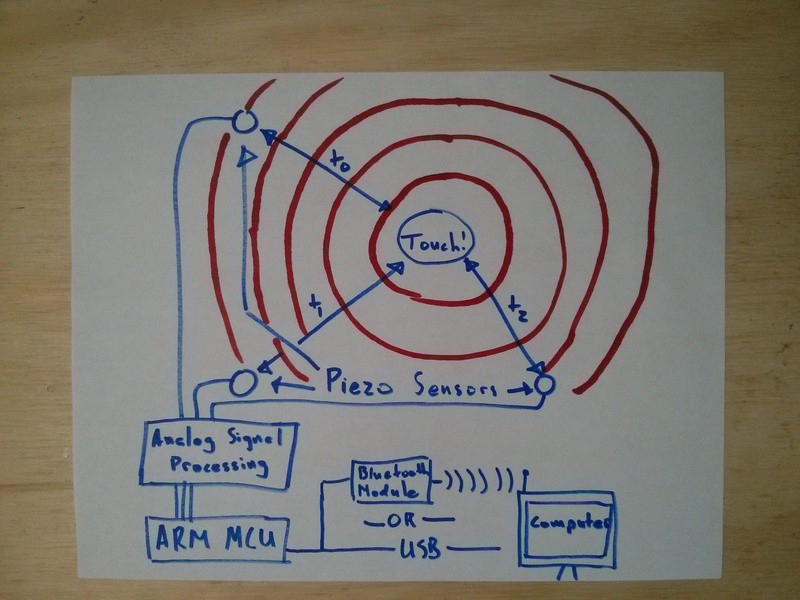 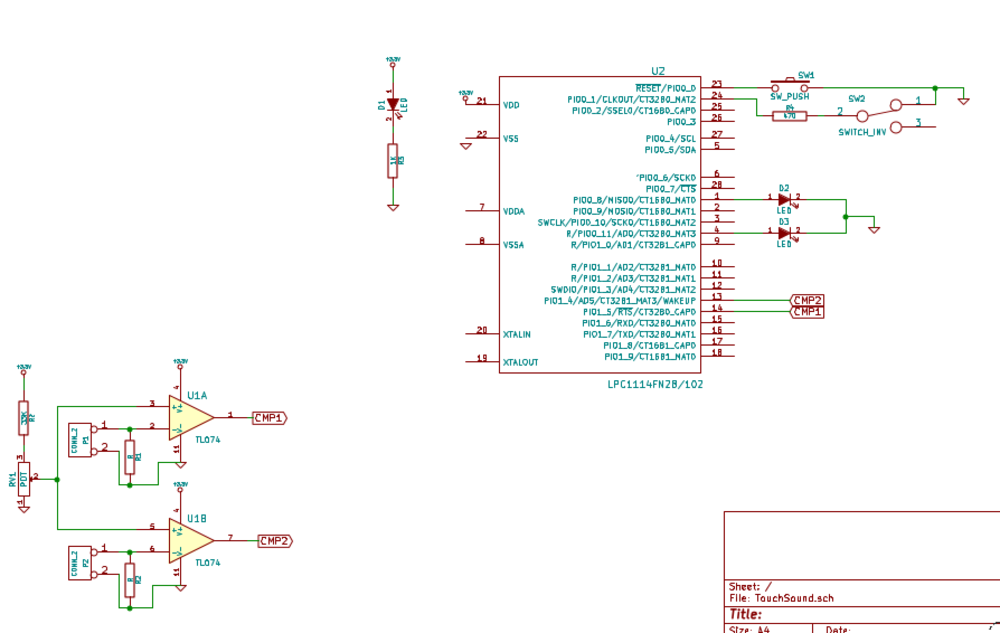 Hey, the video seems to be private, would you bring it back ?
Thanks ;)

I was working on the same idea a number of years ago using discrete logic. Just too many parts. Modern cheap processors are great!

Nickson Yap wrote 09/04/2014 at 12:42 • point
Instead of using time of arrival (TOA), I was thinking about comparing the amplitudes of the four sensors using Arduino. It's not accurate plainly to use amplitude so a more complicated algorithm is needed, like integrating the amplitude over time or some sort.
This setup may be cheaper.
Perhaps you can use both amplitude and TOA to get higher accuracy.

Nickson Yap wrote 09/04/2014 at 12:31 • point
Before I bumped into this post, I was in the middle of trying to use 4 piezo sensors at the edges of a Table Tennis table to determine the ball's position.

Mosibfu wrote 07/22/2014 at 16:34 • point
I just love the options this gives.. Teachers could possibly hook this up to a blackboard and everything they write there would be digitized for the class.. Or just using any table as a drum kit / midi synthesizer... with low enough latency/cost the options are almost endless.

I myself cannot wait to see this thing in stores, simply because I dj using the computer, and with my DJ controller I lack options, this thing could turn my entire desk into a sampler/dub step machine, whilst i can still use it as a desk when im not dj-ing.

The only thing i'm wondering is, how does it react on acoustic/external vibrations, eg a cheap paper board table and someone playing music/talking loud, a washing machine centrifuging in the next room, maybe an idea to test these scenario's and find a way to have it ignore interference.

Either way; You got my thumbs up, great device to hack any surface in the house, into a touch reactive surface. Your device is not just a great idea, it gives others the possibility to hack their coffee table into a mouse, their floor in to a dance dance revolution controller, the possibilities are endless.

Thatcher Chamberlin wrote 07/22/2014 at 21:26 • point
Thanks for the comment! I agree - it's a very versatile design that could be applicable in a number of areas. You bring up a good point about external vibrations. My thought would be that you could simple ignore vibrations that come from certain areas. For example, on a table, washing machine vibrations would likely come up through the legs of the table. Hopefully it will be able to be programmed to ignore any vibrations originating from around the region of the table legs. We'll have to find out!

davedarko wrote 07/21/2014 at 23:07 • point
This sounds cool, I ordered some piezo elements once to work on an arduino based version of that - basically enhancing the knock script to get more inputs and scratching on the table to get a crude position system thing. Good luck!

Two channel analog input for the Pi Zero for under a dollar.
Project Owner Contributor