For micro HTTP server in C

Connect your browser to your smart devices, using a minimalist HTTP compliant server written in POSIX/C

If you need a very-high throughput or a multithreaded web server to host data for everyone on the web, look at Apache (with CGI), NGINX or https://www.gnu.org/software/libmicrohttpd/

However they are limited by the CGI's basic inability to preserve a context through several HTTP requests and implement efficient sessions : each request must analyse the headers again, check the cookies again, even though the connection with the server was not closed ! Actually you can't even know the order of requests with a multithreaded server, and race conditions are expected if you do anything more than serve static files.

This project solves the problem of implicit sessions with a slower but inherently safer approach : a single-threaded server ensures that the request are received and replied in order. No risk of race conditions from that angle, no need of funky programming techniques to avoid them. A session is congruent with an open TCP/IP connection, which also helps with safety (despite dubious security but it's not the purpose).

The server's code can contain two modules, that each serve a domain and specific purpose:

They can be individually disabled but they are usually integrated in the same server because HTTP/JS makes it much more difficult to connect to resources located on a different IP address or IP port.

The client first points the browser to IPaddress:IPport which provides the gateway to the application, with its code, images, text... It looks like a normal web server, probably like yasep.org.

The code is downloaded by the client then JavaScript is executed. The server can focus on real-time, low-level operations while the client performs the high-level application logic, user interaction, computations and display.

This workflow is ideal when you want to control, configure and interact with embedded devices, over wire or radio link if you need. Your client can be any brand or model as long as it abides to simple web standards. You can code once in JS (with ygwm.org) and run everywhere !

The original source code was hosted there : http://ygdes.com/sources/

The code might use the GPIO library that I maintain in another project : #C GPIO library for Raspberry Pi (it was created and forked from the same article in OpenSilicium n°6)

Since 20170225, the code has evolved to serve files and better support HTTP1.1, including persistent connections.
In 2020/04 work resumed to better support the favicon, remove locks caused by multiple simultaneous downloads, and other features.

Since this is a software project, it's hard to create a diagram/illustration but the diagram showing #HTTaP works well because it shows how this server is intended to be used. It's the "HTTaP server" boxes: 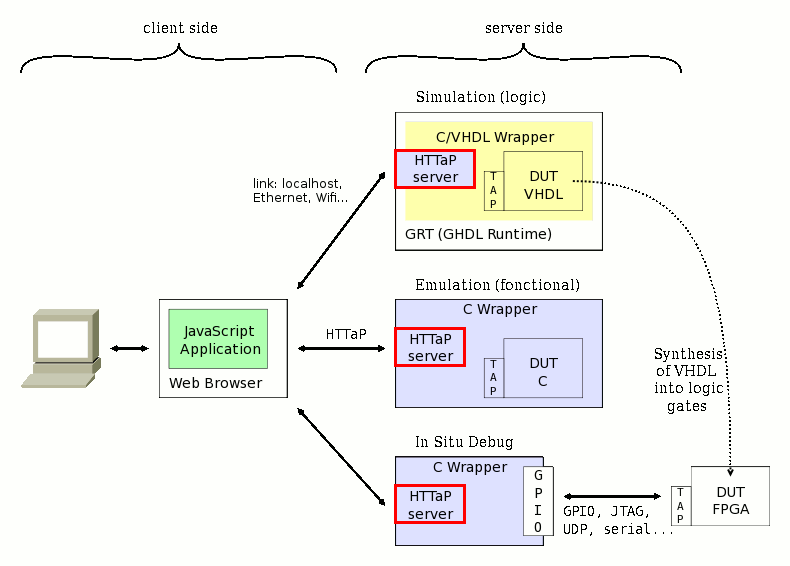 The server is not a competitor to Apache and others, but a piece of code that is embedded in other programs to make them web-enabled and work with real time constraints. You can thus control software, hardware, or even both... This is another reason why it is single-threaded : only one user is expected at a given time.

You can adapt the server to recognise SCPI commands if you are not a HTTaP fan.

Here is an example of use : in 2017/03, the server runs on the Pi to drive the "Remote Controlled Car" extension board, for the workshop at IESA. You wouldn't want somebody else to "drive your car" at the same time as you, right ?

The noise you hear is the generated by "bit banging" the loudspeaker pin in the polling loop that drives the server's FSM. It can get really fast, showing that

In this case, the server is used along with the #C GPIO library for Raspberry Pi and I prepare other libraries to interface with even more peripherals !

See also the #Simon Says learn Pi and IoT project where these building blocks are put together.