Or how to build a HF transceiver and learn along the way!

Okay, let's use the BitX40 7MHz transceiver as a baseline, and break its latest iteration down to its building blocks. I'm not going to re-explain everything Farhan did on his website, this is just an extremely short summary. 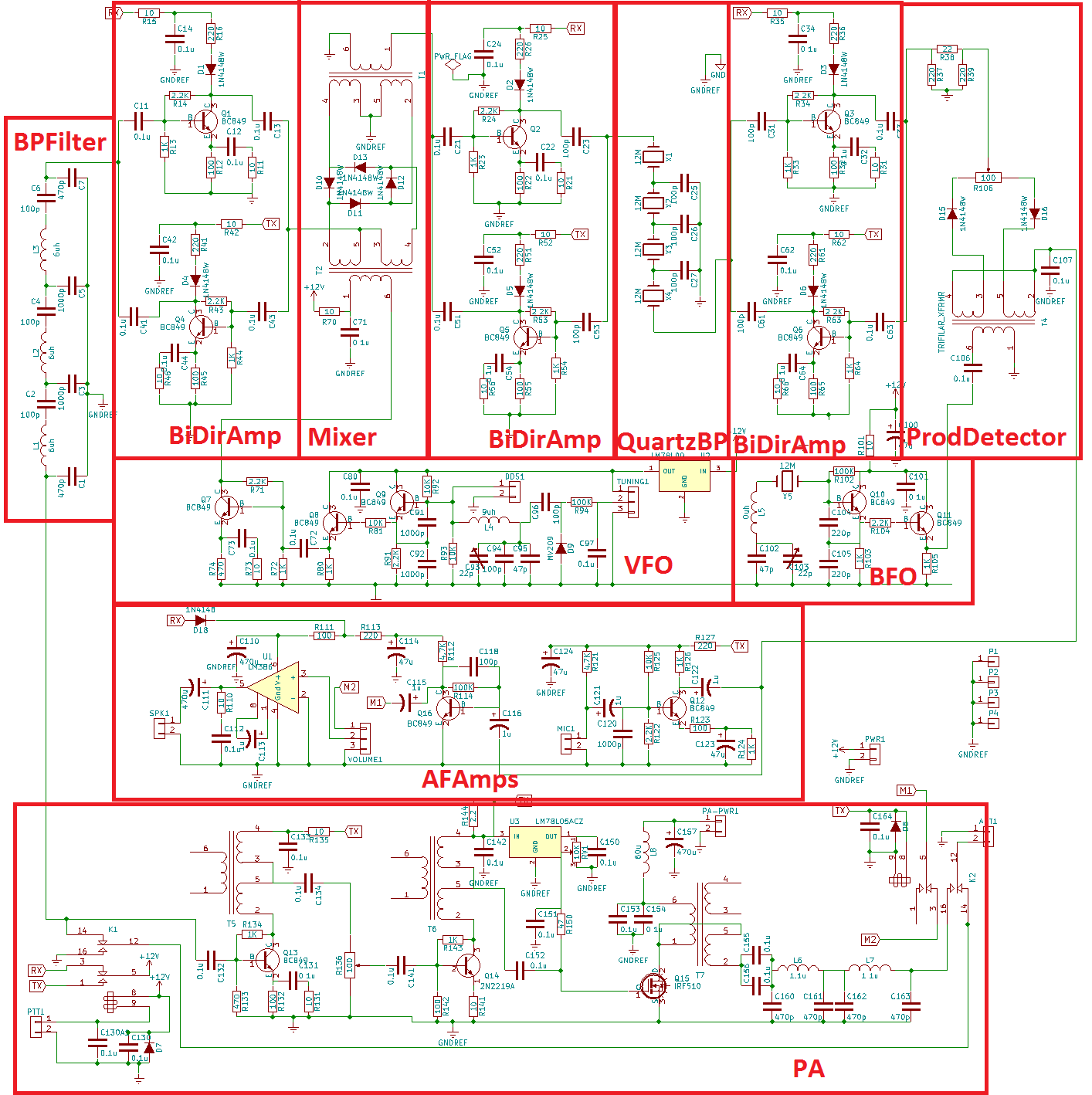 This stands for Power Amplifier: it boost the signal up to 7W through three transistor stages. A low-pass filter makes sure the harmonics are attenuated as much as possible. In this version, the filter is designed for 7MHz. Operating the amp at other frequencies means changing the filter.I also need to do some more reading about the last MOSFET stage, apparently something there has to be changed for other bands...

The PA is only used while transmitting. When receiving, a pair of relays bypass the circuit altogether.

This is a Band-Pass Filter that attenuates any out-of-band signals. It's used while transmitting and receiving signals. Another band-dependent component, specifically designed for 7MHz.

Bidirectional Amplifier. I love this block. It seems so simple, yet so clever!

This takes the RF signal as an input, plus another variable signal coming from a local oscillator, and down- (or up-)converts it to a fixed intermediate frequency. The topology here follow the one of a diode ring mixer. Apparently pretty broadband.

I still want to figure out how a mixer can be additive or subtractive, and how (if?) its typology changes.

The IF in this version is at 12MHz.

This Quartz Band-Pass filter has an extremely narrow passband with a few kHz, with sharp edges. The crystals have to be carefully selected, with very close centre frequency (+-50Hz?), amongst other things. Bidirectional by design.

Second mixer. Feeds gets the IF signal and converts it down to the audio frequency (AF) range, thanks to a second oscillator, the BFO. Also bidirectional.

The Beat Frequency Oscillator generates the signal for the product detector. Its frequency is slightly above or under the IF frequency, for Upper Side Band or Lower Side Band. Farhan doesn't seem to need to tune the BFO when manufacturing his kits, as he carefully selects the crystals to match the ladder filter's frequency.

Variable Frequency Oscillator. Well it's actually a VCO (Variable Controlled Oscillator), whose frequency is set through a potentiometer. An additional connector allows to connect a DDS, for more a more wide, precise frequency range. The VFO's frequency in the Bitx40 is 5MHz, which mixed with the 7MHz of the received signal gives an IF of 12MHz.

This blocks contains the amplifiers for the microphone and the speakers. Depending on the state of the transceiver (RX or TX), either amps are energized.

All the assumptions here may be wild guesses! We'll see how it turns out to be once the boards are made!