Small, easy to use, cheap ZigBee developement board for the internet of things.

This project is now on Tindie: https://www.tindie.com/products/NandFarm/rfarmer-atmega256rfr2-24-ghz-zig

Let's be honest here, everything you do/buy/hack is price dependent and when it comes to adding to each and every object you think of, a wireless enabled chip, things start to get expensive really fast. Now, there are a lot of development boards out in the wild, capable of wireless communication but not many people are going to buy a 60$ device, to stick it in a flower pot. What if you have many flower pots? Things will get ugly. So why not create a small, cheap, open source development board with wireless capabilities?

Based on the relatively new 8 bit ATmega256RFR2 chip, it features: 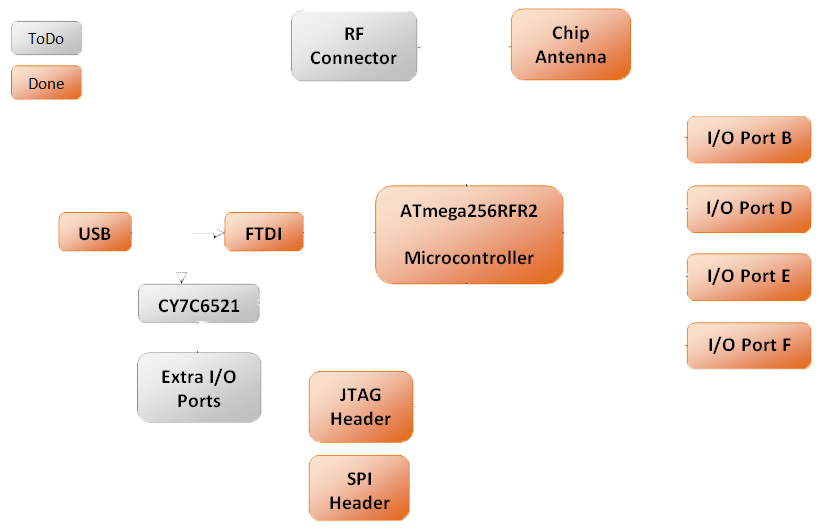 - calibrated the matching circuit on the antenna

- added RF antenna out for matching and external antenna connection.

- make it compatible with Atmel Over The Air Upload (OTAU) bootloader

the v0.2 circuit and layout can be found in the resources. Late reply, I know.

Radu Constantin wrote 08/06/2014 at 13:34 • point
Yes it is possible. I know the Zigduino (or something like that) uses the contiki OS and is based on the atmega128rfa1, wich is the older version of this chip.

Jasurbek wrote 08/08/2014 at 05:12 • point
Thank you Radu, look forward for v3. and I will try to build my v2 when you finish. For v3, I think ATSAMR21Gxxx would be a nice choice as you have stated.
I guess it will be a good kickstarter project, but before you have to make some buzz about this platform, then maybe you can get a lot of supporters.

Łukasz Przeniosło wrote 07/23/2014 at 19:22 • point
I was looking forward to creating a device where I could implement tje zigbee stack. I had no idea of this atmel chip existense, i thought i will go for a stm32 arm chip. If you gonna swap for an cortex m0 device, will it also be specialised chip? Or will you build the hardware outside?

Radu Constantin wrote 07/23/2014 at 21:18 • point
I am hoping that I will be able to provide both of them; the RFarmer8 and the RFarmer32. They are both specialized chips, but last time I verified (June?) on the Atmel website, only the 8 bit had a preliminary datasheet, so I started with it.

Łukasz Przeniosło wrote 07/23/2014 at 21:22 • point
Yes i havent seen the cortex m0 avaible for buying anywhere.
I would love to contribute, maybe order some samples tommorow and try some. If you need some help and would like company on this project im totaly in.

I would very much appreciate any help I can get. Thank you.

You can really gets shipping cost down with thiner pcbs too:) And with DHL shipping you can get a new board spin delivered within a week.

Radu Constantin wrote 07/23/2014 at 18:25 • point
Had some problems with elecrow for a different project with an official price quote. For this project I used OSHPark and aside from the long wait, I am fairly pleased. I will try 3pcb; looks nice. 10x

Dear Radu, This is David from Elecrow. Could you please tell me what the problems you met? I will feedback to the PCB engineer to solve these problem. Thanks in advance.

Post here that I mayn't reply timely. my Email is david@elecrow.com.

The problem was more of a financial one. In the firm I was working at that time we had no way of paying for the boards and then justifying the cost to our internal accountant. Thank you for the offer to help, but his was several years ago.

KingOfKYA(Travis K. ) wrote 07/23/2014 at 20:36 • point
Ah too bad, i have yet to really have an issue with them but with all theses board houses in china its best to speak really clearly to make sure there is not a mistranslated. This is a good refrance on how to write for them. http://simple.wikipedia.org/wiki/Main_Page

Also i have bough a few thousand, worth of stuff from elecrow so i may be getting special treatment, no idea.

Radu Constantin wrote 07/23/2014 at 21:24 • point
I tend to stay away from China manufacturers, but I can not deny the price they offer. My problem was of a more administrative-financial matter, so I don't think it applies here.

Are you sure the link is ok? It just gives me the Wikipedia front page.

KingOfKYA(Travis K. ) wrote 07/23/2014 at 22:27 • point
Its the wiki simple page if you look closer just makes English easier for them to read/run though translate.

Hello, my name is: a wearable name badge