A solar powered ePaper with an ESP32 to update the display over WiFi, and magnets to stick it e.g. on a fridge, and a cloud app with which you can write and draw on it.

A while ago I bought an ePaper and displayed some images with my RasperryPi on it. See here for a video of it, with a link to full source code etc. in the description:

The amazing thing about ePapers is that the image lasts without power forever (I tested it for months), and the contrast is very good. The idea is to build a small device with ePaper and solar cells, and then you can write or draw on the it with your smartphone, or even remotely from anywhere over the internet to show a message. The case will have magnets on the back to stick it on a fridge or other metal objects. It will use an ESP32, which polls a server once per hour to get a new image to display.

This is the electronic version of sticky notes. But the ability to update it over the internet opens up many novel applications. For example install it on the fridge of your grandma, who might not be very proficient in using modern internet connected devices. Then you can send her birthday wishes, or remind her of schedules. And the buttons could be used as a feedback channel, like confirming a date. Or when installed at a public place, it can act as a bulletin board. Or it can be used for a modern form of internet connected graffiti or other art projects. The possibilities are infinite.

Each display has a unique ID (I think I can use the MAC for this, to avoid manual configuring it) and the server can be configured in the ESP32 to which the display connects. On the server side, multiple displays can be registered with a name, and updated, individually, or multiple with the same content. Device architecture and example or one device and one server: 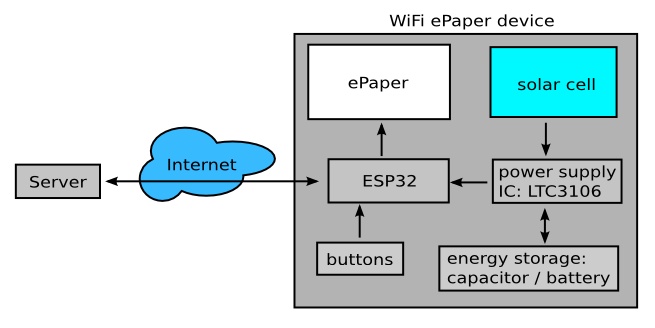 The device has 3 buttons. If two buttons are pressed at the same time, the device starts as an access point. A smart phone or any other computer with WiFi hardware can then connect to it and configure the local WiFi access point SSID and password, and the server to which the device should connect, with a website that is served from the ESP32. After configuration, the device restarts and connects to configured server with the selected WiFi network. The rest is then configured with a web app at the server side.

In the webapp you can see which devices are connected to the server and you can assign names to it (e.g. "fridge", "living room", "shop-window"). The webapp shows the current displayed image of each device, which an be changed (text enter function, image import and freehand drawing). The devices polls once every hour, so the webapp shows the current status, with the old image and the new image (status display "pending"). When the device displays the new image, it returns an acknowledge so that you can see in the webapp when the new image is displayed.

- the device has 3 buttons, with which e.g. more than one image could be stored and displayed (show next/previous image)

- the buttons could trigger some action over the internet, like in combination with other home automation hardware, turn the light on/off, or it could be used as an alarm (contacts for the buttons are accessible and e.g. a reed switch could detect when a door opens)

- the ESP32 has a temperature sensor. This could be used to log the current temperature for each hour when the device polls the server to get new images.

- it could be used in a store to show special offers

- in general it could be used for any information display that doesn't need to be updated too fast, like opening hours for a shop or agency, together with useful current information

- alternative construction, to use more light from bulbs installed on the ceiling and for a more stable attachment for a fridge, or a shelf etc.: Have you experimented with different waveforms for the display update? I'm working on a project with a few eink/epaper displays at the moment (7.5", 4.2", 2.13"), and having a fast, non-flashing display update is something I've been looking at (the display is in sight all the time and updates quite frequently). Curious if you've considered or tested anything in that space.

This would be great, but I don't know how to change the waveform. The SPI protocol is very high level ( https://github.com/FrankBuss/wifi-epaper/blob/master/firmware/main/epd.c ) and all commands are undocumented.

Who is the manufacturer of your displays? Some of them are not allowed to use partial updates due to legal reasons. Also there is a reason why full updates (the flashing ones) are the standard. The optical performance is really bad if you only use partial updates.

Both displays are from http://www.pervasivedisplays.com The black/white display allowed partial updates, not just by line, but you could individually say per pixel if it should change to white, black or leaved unchanged. Looks like the new black/white/red display allows only full updates, but at least black/white and red are two different commands and send sequences.

With 3 different particles the drive pattern is much more complicated, so I guess you can't even do partial updates there. In the industry the use case for these displays is price tags and shelf labels so they don't need them.

Hmm, your code looks suspiciously similar to mine - command bytes, pin names from the display, protocol etc. Looking at the display on my desk vs. your photos, I think this is possibly the same display, though I have a black and white one, not black/white/red. Here's a chunk of my code that I haven't pushed to Github yet:

The display I bought was GDEW042T2 from Good Display on AliExpress, which appears to have been de-listed (at least the listing I bought from). Here's a picture:

The guy I was emailing at Good Display was a bit cagey when I asked about a specification for the LUT/waveform registers the datasheet mentions.

> Firstly, waveform is not must to drive a e-paper.
> Only at specific environment where temperature is changed widely.
> We will supply it to customer when you have bulk purchase.

Looks like your breakout board is also very similar to mine (9 pin out, 0.47ohm resistor, 3 schottky diodes, N-channel FET, bunch of :caps)

(though mine is a single sided home-made thing)

Looking forward to seeing your solar charging solution :) The BQ25something TI chip I've been using "locks up" when I'm refreshing my screen ( it can only source 50mA peaks, with an esp8266 that's already too much ), and I've been playing with the LTC3105 to disappointing results...

I'm already up to 2.5F! ( not kidding i slapped literally all my caps together just to try, but i think at that point the load just to charge them freaks out the regulator )

I'll try to use the Enable inputs on the ltc, maybe disabling it while my program is refreshing, then enabling it before going to sleep will keep it happy

Sounds strange, especially because the LTC3105 allows a Li-ion battery at the output, so 2.5 F should be no problem. And the datasheet says 400 mA. Do you have a circuit?
I'm trying the LTC3106. A bit pricey, but it does everything for you: separate port for a battery/super cap, switching between two different inputs, charging the battery, automatically selecting  buck or boost converter mode etc.

Sry i realized I was a bit ambiguous: the TI bq25570 was the one with the 50mA limit that I kept running into.

The LTC was coaxed into behaving properly by shutting it down when the ESP was awake; I'll see if adding an inductor will let me tie the SHDN line :)

While testing my setup, I noticed that the ESP32 draws up to 500 mA. And another thing I tried: I decoupled the output of the power supply IC with a coil. So Output of the power supply, goes to something like a 1000 uF capacitor to GND, then through a 10 uH coil (high speed, like used in the ePaper driver), and then in some big capacitors. This reduced the spikes a lot, and maybe helps you, too, to avoid freaking out your regulator. But it will introduce some ripple on the power supply input of your ESP8266, but this should be ok, because it has a wide range of supply voltage.
But I think in the end a really powerful regulator would be better, which can handle like 1 A, and then placing the big, low ESR, capacitors on the regulator input.

I need to keep inductors in my head as a solution... I'll get a large coil from digikey and let you know! thanks :)

This is very cool and something I'd thought should be possible myself.

That display is a little pricey, it's more than a brand new e-reader! I wonder if a kindle replacement screen could be used?

I think I've seen a Hackaday.io project which uses a kindle replacement display, they are cheap from Aliexpress etc. And @oshpark did a breakout board for a 2" ePaper display, which costs less than $10, can't find it at the moment. For many application such a smaller display would be still useful.

This is the project with the Kindle screen:

Hi Frank - this is awesome - but I can only see a link to a board and a list of parts, and not an explanation as to which part is which value. Is there a chance you could point me to this please?

Do you mean the breakout board for the 4.2" display? Right, I noticed that in the original schematic there was values at the parts. I added this to the Eagle circuit diagram. Still work in progress, I'll add a better explanation later, but this is the parts list for the last working breakoutboard:

Hackaday Prize 2019
Write a text or send an image to a solar powered ePaper with your smart phone.
Project Owner Contributor

The Slowest Video Player with 7-Colors!

Modified Chroma74 shelf label to be my weather station display. It is 7.4" 3-Color E-Ink units that cost $12 on eBay.
Project Owner Contributor