In this post, I want to share a bit of the origins of the Makernet idea. In the next post I'll talk more about where I am today.

By way of background, I've been a "maker" since 2012, when my daughter was born. Prior to that, I was a software engineer turned management consultant. I guess I was destined to re-enter the making world. On one fall day in 2012, I walked in a Radio Shack and on a whim, bought my first Arduino. That afternoon, I blew the dust off of 15 years of unused EE training and got hello world up and running.

The idea of Makernet started a few years later in my re-entry to "maker" hood. My daughter was about one year old, and I built her an electronics toy. I made it out of crudely glued plexiglass with a AT328P and a simple program that made light and sound when she pressed a knob. I wanted her to have something she could play with where the internals and electronic guts were visible. (The transparent case was critical - I wanted her to feel her electronics toys were understandable not mysterious.)

Picture below: My first standalone project (since 1998). 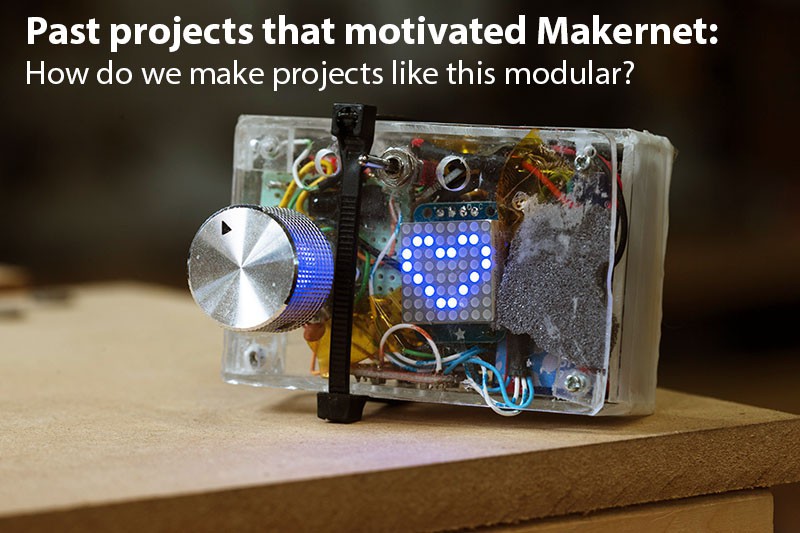 The project required a rotary encoder, and I had limited experience with this type of device. I hacked the module onto a slab of blank perf-board just above the MCU. Too late, I discovered that the pins I had used did not support the right kind of interrupts for grey code. More rework. Uhhg.

Rotary encoder knobs are cool. They are so fun to twiddle, especially if your project does cool things with lights and sounds. Every project should have one. But what a pain to integrate! You have to deal with interrupts, with a state change and a ton of other things.

There and then, I resolved to someday just create a simple I2C rotary encoder module. Then adding a rotary encoder to any new project would be as simple as adding an I2C device to the bus.

Fast forward a few years, and I was building the box of clicky awesomeness. It has at least 6 I2C devices inside: an accelerometer, gyro, magnetometer, hepatic driver, capacitive touch sensor, etc. Two devices had to have I2C addresses reassigned. The wiring was a complete mess. The project barely fits in its case due to all of the obnoxious bits of glue logic. But the project was a success - on Cambridge Hackspace open houses, people love sitting down and playing with it. 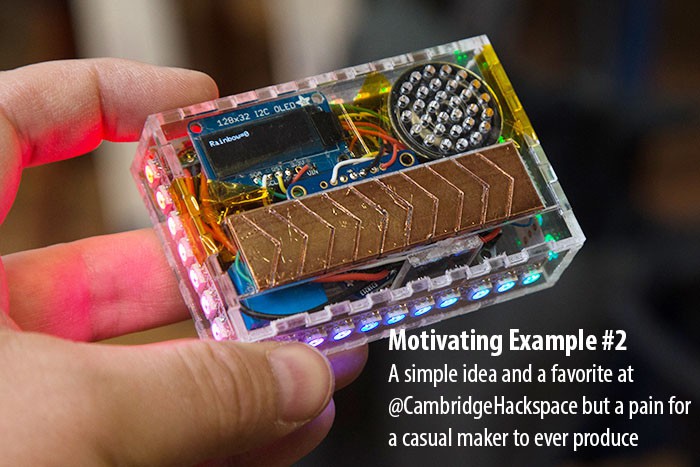 How to make things more modular? At this point, I had been building quadcopter using the DJI Naza platform and I was familiar with the elegance of CANBUS. The DJI autopilot platforms communicates with everything over CAN - the GPS, bluetooth, gimbal control, etc. Its dead simple to rearrange your drone because you don't have a ton of point to point wiring.

I became determined to make the same level of flexibility and interchangeability available to Makers. I built an early pitch deck and researched I2C and CAN to try to decide what technology to standardize on. I2C is limited - it doesn't support flexible addressing and its not clear how long the bus can really be. It doesn't seem ideal. And CAN is obnoxious - it needs relatively expensive 5V logic transceivers and the protocol is complex. In most cases, you need to select a specialty MCU that has a hardware implementation for the CAN protocol.

Then I discovered RS-485. The transceivers are relatively inexpensive. Combining RS485 with a $1.00 ARM MCU, you'd have the foundation of a network bus for maker projects. And you get the resilience of

At this point, I started sharing the idea around my local hackspace. Someone quickly pointed me towards a platform called Modulo. I reached out to Erin Tomas, the inventor of Modulo. She had a very similar idea and created a whole line of modular units that she now sells online. The idea is that each module is a simple sled that fits into a docking station. One of the modules is the main controller, and the rest act as I2C slaves. She has a library of about 10 different modules that can fit into the docking station.

Her vision is to enable plug-and-play project creation especially in a teaching setting. The modules look cool, work seamlessly and don't require any soldering. (Go pick some up now!)

As if that weren't awesome enough, Erin found an incredible way to get her components networked. Plug and play comes from her use of I2C as the physical and data-link layer.

Erin was nice enough to spend several hours on the phone kicking around ideas and was very encouraging of the Makernet idea.

Armed with the new knowledge that I2C can be hacked to implement resilience, arbitration and addressing, I decided that the first iteration of Makernet would be I2C based.

My aim now is to build on Erin's ideas and flesh out my broader vision. I want to enable the creation of pocketable, battery powered projects that can be easily shared. My design is not sled-based, but instead strings everything together with a 6-pin cable. This allows you to configure the exact placement of different modules into your project. I also want to make it easy to design new peripherals, so I can encourage other designers to contribute to the idea. To that end, I am working on a slightly customized version of the Arduino Core. Finally, my goal has always been to enable a RS-485 interconnect, so I've chosen processors and an architecture that can allow a migration to RS-485 later.