Most of the autonomous moving robots makers build need knowing where they are. There are several methods to determine this for a robot, such as Lidar mapping, indoor positioning etc. But most of them are too expensive, too difficult to realize or simply too inaccurate. That leads to most maker robots ending up just with a simple revolution counter of the axis.
With a scope for an area of few meters (a lawn mower in my case), this low cost robot localisation system (LRLS) should be very cost effective and possible to build for an intermediate maker.

When someone is somewhere and try to figure out where he is, he start to look around and looks for some reference points. The LRLS does exactly the same: A Laser turns around and sees where a mirror (reference point) reflects his light. When he gets a reflection he has a reference. To determine the position ether a 2nd reference is required (triangulation) or the distance to the reference point need to be measured. Both are possible with the LRLS in theory. 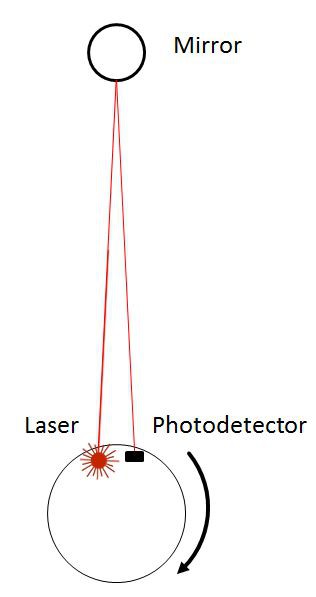 When pointing with a laser pointer to a mirror, there is only one point in the room where the light comes exactly back to the transmitter. This can be avoided by using a mirror in the form of cylinder. But still with a cylindrical mirror the light comes only on one height level and only with an exact horizontal back to the transmitter. The utilisation of a line laser avoid this and provide a certain tolerance in height as a wildly immunity against tilt angles

A simple test arrangement with a cylinder mirror and a line laser confirm the reflection, if the laser is strong enough and more or less on the height of the mirror. The critical point of the system is the angle (2*β) under which light comes back to the receiver. The geometry (see picture) gives only a very narrow angle under which light comes back. This angle (2*β) depends on the distance (d) between laser and mirror, a bit on the diameter of the mirror (r) and the diameter of the sensor (2*x) (see formulas on the picture). With a distance of 5m this angle is only about 0.0001 degrees. As the laser is turning around its axis, it will always hit the angle under which it reflects the light to the sensor, but it will also result in a very short pulse. This requires a very fast reaction of the microprocessor calculating the position and a high bandwidth of the electronics.

In theory the distance between the laser and the mirror can be determined with the width of the light impulse. In reality this will not work due a lot of tolerances (e.g. laser line width) and as the relation of pulse length and distance is a hyperbolic function which can’t be expressed in a y=f(x) format (or at least I wasn’t able to find a solution)

The very narrow angle (2*β) leads to a very short impulse which gets shorter as bigger the distance between laser and mirror becomes. This requires either a very fast electronics or a low laser angular velocity. With the speed of 1 U/min the impulse length for an object in 5 meter distance is about 10µs (100kHz) which might be ok for “standard” electronics but means also that the object is sampled only once a minute. A higher sampling rate limits the distance or has a higher demand to the electronics. But anyway this is only the theory. In reality is the Laser beam by far larger than 2*β which leads to a longer Impulse anyway. The usage of two additional photo detectors would allow changing the direction whenever the laser beam passed the photo sensor. By doing this a higher sampling rate could be achieved even with a low angular velocity 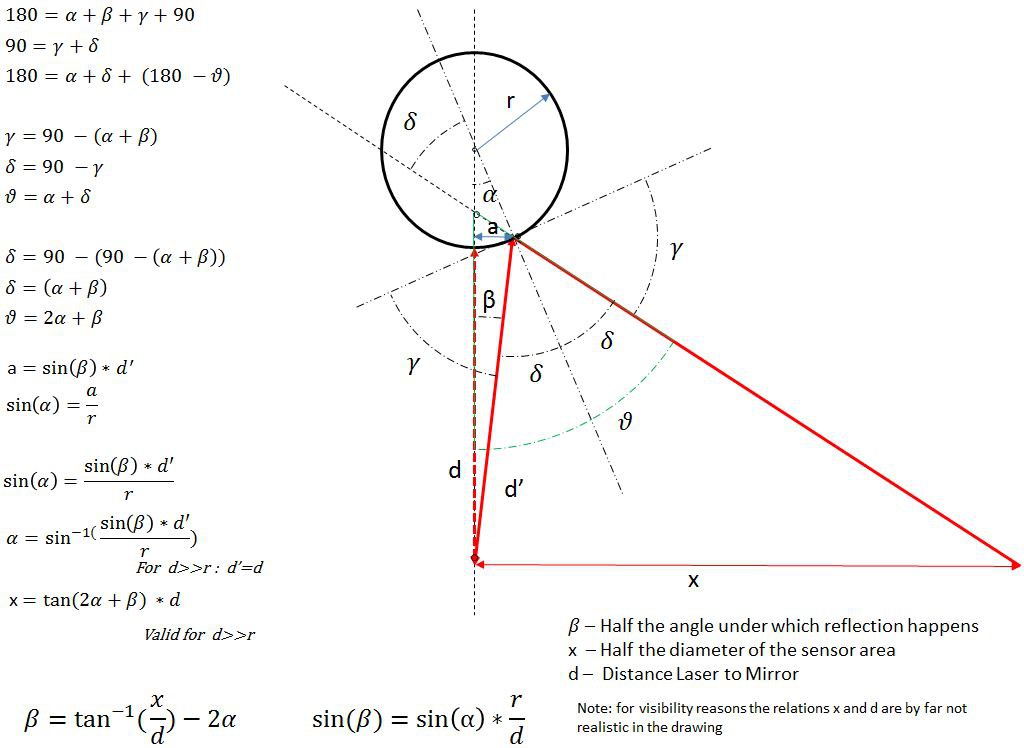 The main limitation for the distance might be the amount of reflected light for large distances. A laser range finder makes with a similar principle about 40m. The LRLS has instead a line lases which provides less energy on a single spot which reduces the reach of course. But due the large angle of radiation of such a laser stronger laser can be used as the danger for the eyes is much less. In addition a mirror offers a much better reflection than a range finder does meets when pointing to any object. However the amplifier circuit requires a high pass characteristic in the range of about 400Hz (0.2m) to 100kHz (5m) this allows to eliminate any ambient light effect and make it really sensitive on received laser light.

In any case does the LRLS have very high angle accuracy even for very short distances as 10cm, 2*β is around 0.1 deg. so with all side effects a minimal resolution of...

Instead of a cylinder, you could use a retroreflector: https://en.wikipedia.org/wiki/Retroreflector

Fantastic idea. This brings potential to increase the distance and to get a longer distance independent impulse. It's also easy to get : http://makezine.com/projects/make-35/how-to-make-and-use-retroreflectors/

Or you could just use the reflective stickers that they put on cars and traffic signs. That would also make it very easy to deploy them.