The EEEmu SPI emulates any Serial Peripheral Interface Bus EEPROM or Flash memory chipsets up to an interface speed of 25MHz. It also supports any supply and interface voltage between 1.8 to 5 Volts and can be configured to support even the largest of memory sizes.

The world's landfills are littered with old PC motherboards that have failed due to bad flashing, malware or rm /sys/firmware/efi/efivars/*. What if you could recover these boards easily or prevent it from happening all together?

The EEEmu SPI will allow you to do all of this and more. EEEmu SPI can:

EEEmu SPI is easy to use as a simple drop in replacement for existing SPI EEPROM. It allows you to quickly and easily configure and load new EEPROM image files using a USB mass storage interface, to onboard storage. Deep configuration options allow you to tweak the operation easily to support any brand or sized EEPROM. 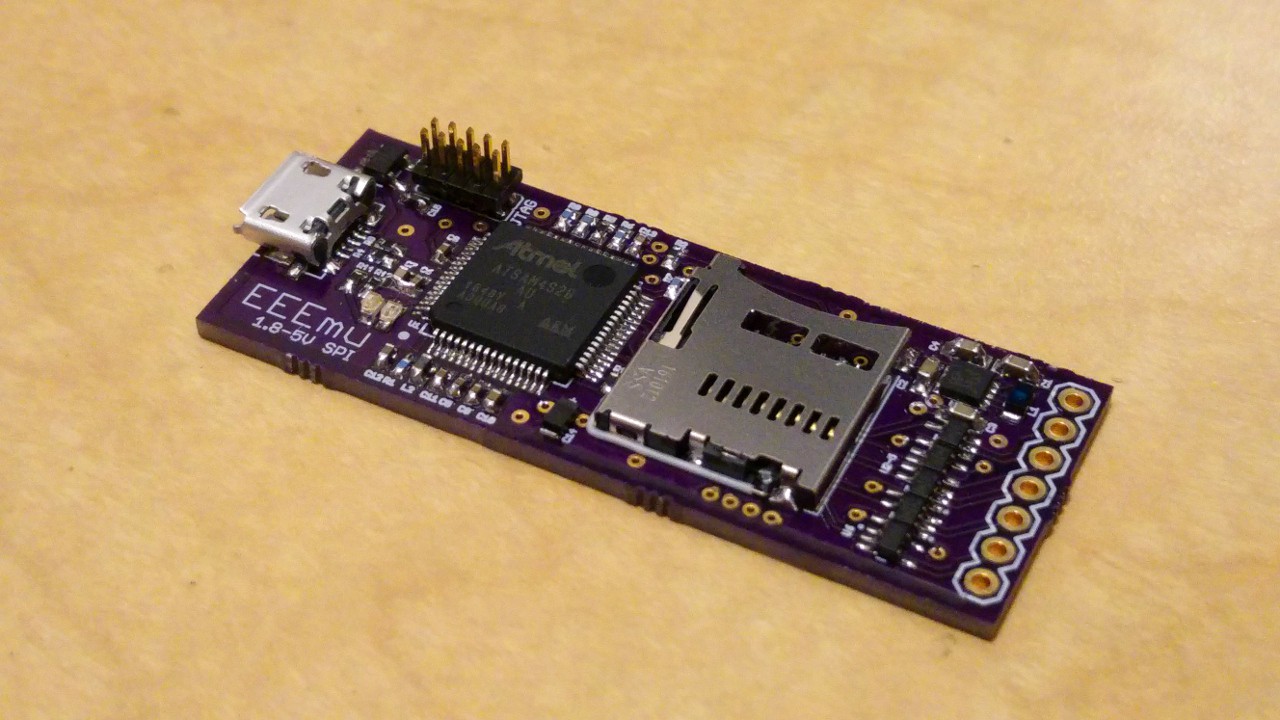 EEEmu SPI also provides additional 3.3V GPIO/I2C pins to allow you to hack the device to your heart's content.

Level conversion supports open drain (pull-up) or active modes. Dual power supplies allow you to power it from the USB or SPI interface (even at the same time).

EEEmu's software is also completely open source. It supports reprogramming via USB, so you can easily tweak the code to suit your application. 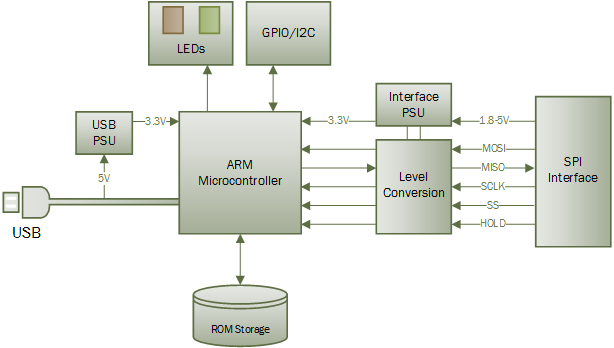 After Step 1, collect underpants, and the emulation code in the firmware is finalised, an initial run of these boards will be available for sale on tindie.com for developers and hobbyists. It is hoped that the community adds additional functionality to the open source firmware to create a robust and versatile EEPROM emulation platform.

All EEEmu code, documentation and design on these project pages are licensed under the GNU General Public License (GPL) unless otherwise stated.

I don't get how this is actually going to work... I mean to emulate regular SPI flash you need to reply with the first byte of data on the next SPI clock after the host has sent the address.... and you don't control the clock. Hence, you have a fiercely low latency requirement; at 25mhz SPI clock that means you have to have fetched any random byte the host specifies from your storage medium within 40ns. It's actually worse than that, because of latency in your MCU's SPI slave hardware etc.  Using an SD card is never ever ever going to meet this requirement..    so..??   I assume this is why the project was canned?

I'll second that question about the missing repository. I'll be sad to see it has been removed.

What happened to the repository?

is this project still active? I can’t find the hardware on tinder for sale. I could use about a dozen of these.

Hihi,
I made a version of the Arduino core for the SAM4S4A a while back, ( it snot in Arduino 1.5x format so one can't use it via boards manager yet ) but if you shove the files in  arduino/hardware ( windows ) then you should be able to compile for it, or use this as a starting point if you are ever interested in "Arduino IDE and API " for the EEEMu

my port was partly based on the SAM3S used in Flutter,

Hi DD, this is definitely something I will look into at a later stage for other people to dev on the board. Cheers!

Did you consider that a lot of current PC motherboards use Quad SPI to connect to their BIOS flash ic? I'm missing the WP and Hold lines usually used for that. Also all 4 data lines are bidirectional for Quad SPI, so you can't use unidirectional level shifters.

For most newer boards I'm considering a "pro" version of this board that would support things like that. The speed that this supports probably wouldn't work with much newer boards as well so the pro version would support higher speeds. But this is a great way to get the emulation code underway and be useful for developers and older hardware.

Is the source code for the ARM firmware available?  It looks like the repo is empty: https://github.com/EEEmu/EEEmu-SPI

It will be once I finish up the emulation code. I was mostly just getting everything in place a day ago for the hackaday prize conditions, so it's a little pre-emptive.

I should get one and see how it behaves with #SPI Flasher :-D

I hope to have this available for purchase on tindie in the not too distant future (hopefully end of May). I'm still working out a few things with the emulation code (USB/SD/configuration all currently work) as well as the end user flashing to make it reliable for people to make code changes. I will be looking for a few people to test it out first too if you are interested.

i trust you on the HW side but what about the user SW side ?

There isn't too much from the user side as I tried to design it as a standalone device (once configured). All configuration is done through a config file that is placed on the SD card. The only thing I really need to do is make a generator that creates configs for different EEPROM devices. I plan to support everything that is on the flashrom site first as it's an easy go-to list, then there'll be more to come later. I'll have a way for users to submit working configs too. As for debugging/sniffing, there's two options, the first is to just dump SPI transactions to SD storage, the second will allow you to see these as debug statements over USB. As to how this is visualised, I'll look into this down the track as it can be a massive amount of data for the eyes to ingest.

Cool project, I could use one of these :)

As to how to visually present the SPI transactions; perhaps wireshark would be suitable?
https://www.wireshark.org/docs/wsdg_html_chunked/ChDissectAdd.html

I will totally consider that @Prodigity!

This project aims to design a Firmware Upgrader to upgrade complex Robot Systems based on IAP (In Application Programming) Methodology.
Project Owner Contributor