As a first post, I just wanted to give an update on where the EEEmu SPI development currently is.


I started designing this project around the end of February this year after I became frustrated with having to manually re-flash 20 out of warranty server BIOSes. These machines needed updating to work with some specific PCI-e hardware, and unfortunately they would brick after a software based flash. Pulling the ROM, manually flashing, then re-inserting worked, so it wasn't a firmware issue. Since the manufacturer was less than helpful, other than to suggest to RMA them, I wondered how I could provide a quick, easy and software-less update method to prevent this issue from ever occurring.

Development of the first prototype board then started in March. Things have progressed rapidly since then and I hope to have everything on the prototype fully operational by mid May. From there, a new revision of the hardware should be finished and I will start producing the first batches of boards after testing.

This project has been designed to be produced easily on a smaller scale. I now also have the capability to build small batches myself (about 100/day). The plan is to have these boards available on Tindie as soon as they are ready.

So onto the current status. All the code for the USB mass storage, SD card, configuration files and SPI is currently operational. The emulation code is still being worked on as I want it to be as flexible and easy to use as possible. Code will be made available once this and the firmware bootloader is finalised.

The hardware on the prototype is also fully working. The dual power supplies work under all conditions without fault. The level conversion works as expected with different voltages (1.8-5V) and the SPI works well at 25MHz: 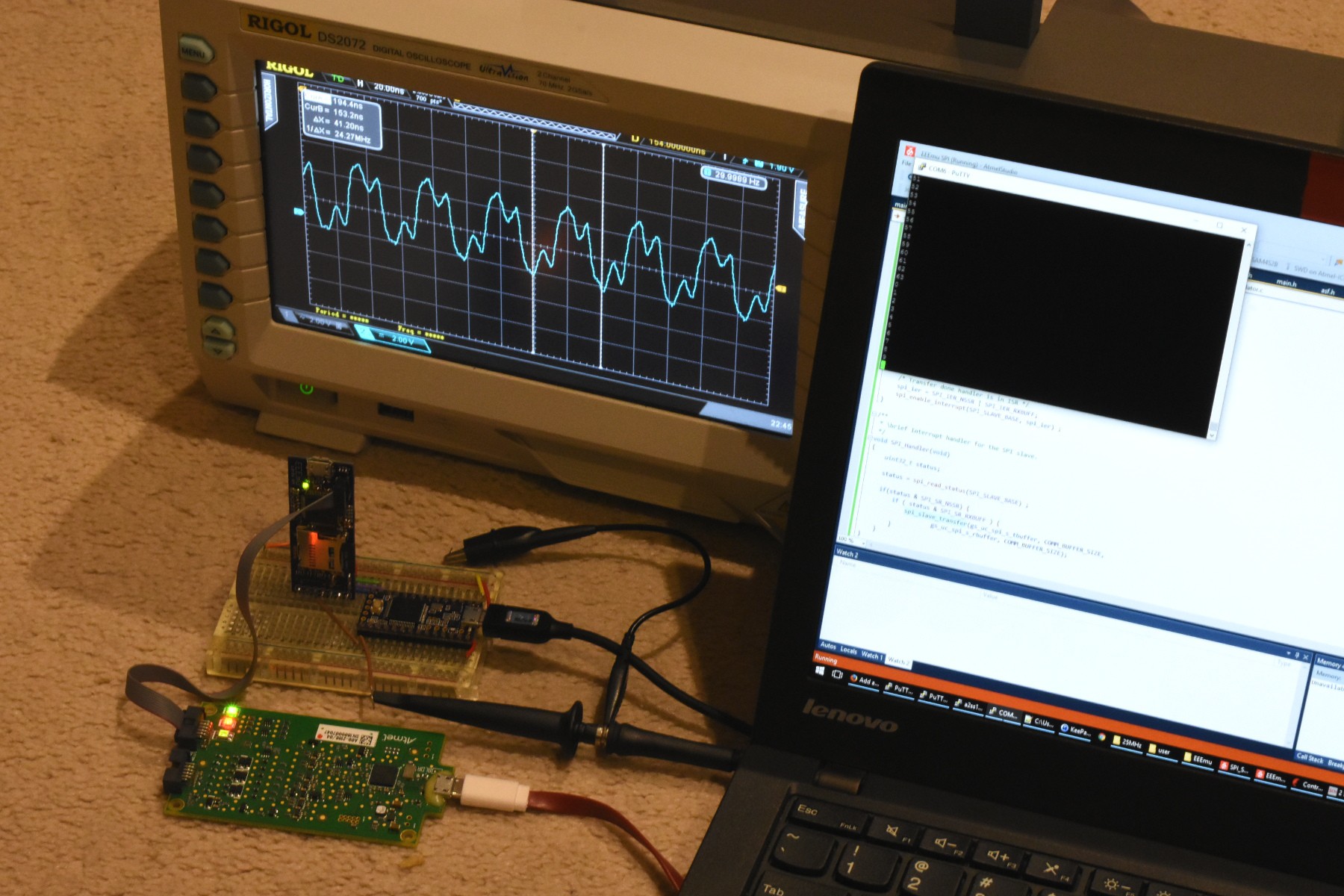 Testing SPI reads from a ROM file stored on the SD card with a Teensy 3.2 @ 25MHz

Connecting the Teensy to the EEEmu SPI is easy:

Everything is coming together quite nicely without too many issues. I did have a minor one which "bricks" the ATSAM4S2B MCU. When entering a certain sleep state, the system controller switches off the internal 1.2V regulator, which then powers off the ARM core and prevents it from being programmed afterwards. There is a flash erase pin that you can bring high on startup for 10 seconds to erase the flash, but this is a frustrating design decision made by Atmel/Microchip.

That's it for the moment. Stay tuned for more updates!