The double action switches allow two independent actions to be triggered from a single key without any modifiers. This feature can be utilized specially to make special characters easily accessible, which is particularly helpful with keyboards that have more characters than a typical English keyboard. 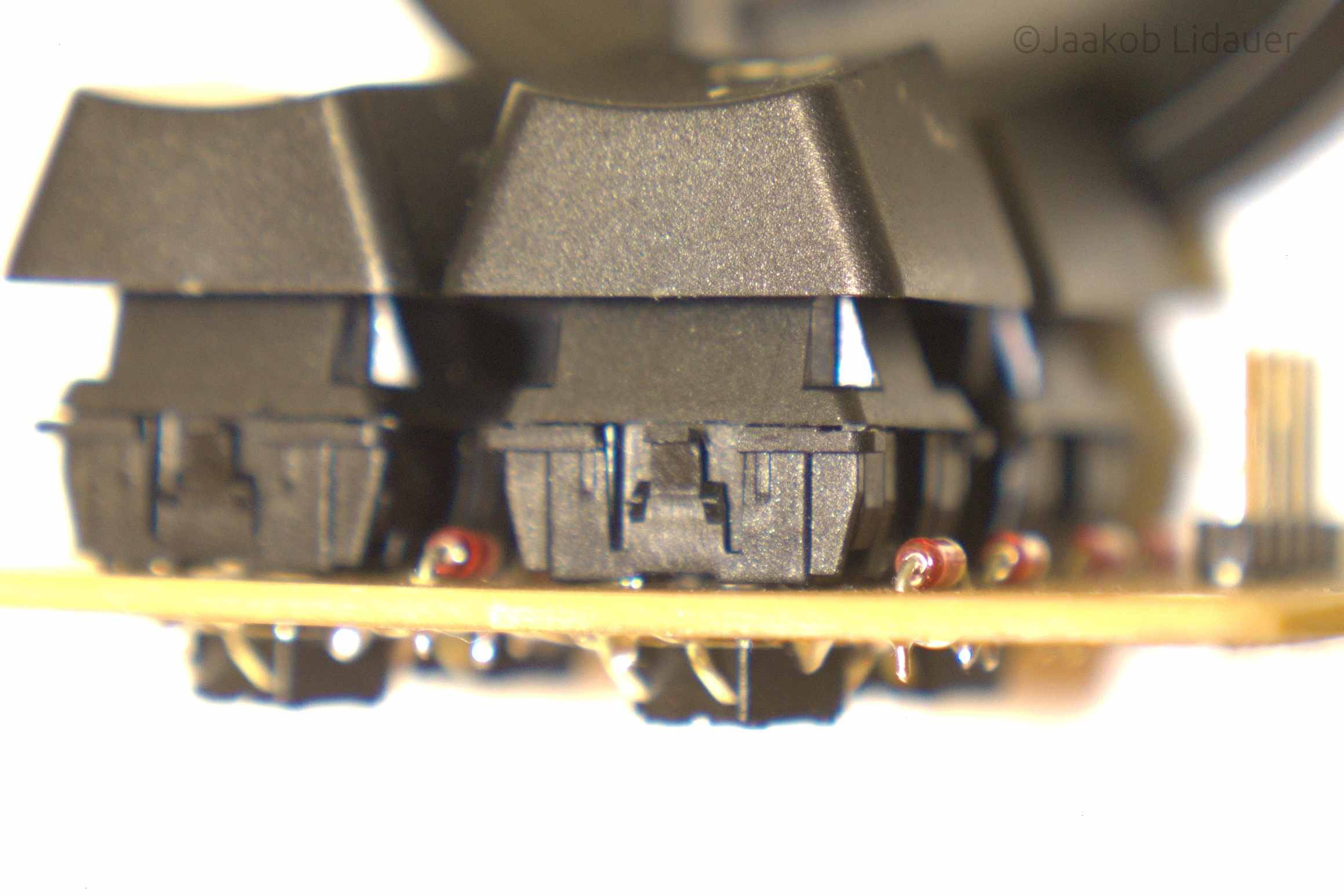 The arrangement of the keys is also very unusual. As shown in the picture, enter, backspace, shift, delete and the arrow keys are all in the middle of the keyboard so they can be operated with both hands easily. The numbers are arranged to...

what You think about this layout https://klawiatura.wordpress.com/

Apple has a "double-action" touchpad on some of their MacBook products.  Drives me crazy, doing things I don't intend.

Cool! But you MUST equip this with a velocity-sensitive mode, like a MIDI keyboard. With a bit of practice, 3 or 4 velocity levels should be absolutely doable by the user. You could thus reduce a QWERTY keyboard to one line of keys. Or add more umlaut/accent stuff the angrier the user types ;)

Master mode: All of ASCII within 127 velocity levels on a single key.

This looks super awesome! How much would it cost for you to make a couple of these for me?

Any possibility of kits or PCBs being made available? This looks like an awesome keeb to build.

I have a few extra PCBs, so if you are interested let me know.

Impressive project - just two questions (1) where did you get the steel laser cut? (2) where were the pcbs made?

The PCBs are from EasyEDA and the laser cut parts are from a local company.

How do you handle ignoring of the first keypress in the case of a "strong" keypress? Did you add a delay and wait for the second keypress before the first one actually registers? If so, doesn't that add a lot of annoying latency?

This is explained in more detail in the Firmware section. The idea is that when a key is pressed one step down it will be registered when it is released. If the key is kept pressed at its first position for 400 ms it will be also registered, this makes possible to keep the key pressed (for writing many characters at once).

Have you thought about how mechanical stresses on those SMD buttons will work since they are mounted on the underside?
Time, or one swift rage smash to the keyboard would probably see them tear off the pads.

I thought about that, but so far I haven't had such problems.

I actually build the back plate of the case so that it supports the tactile switches from below, that should reduce the stress.

a "disable" feature would be really helpful for the heavy fingered, or the angry typist.

Making it hard to type whilst angry might actually be a good thing though.  It could cut down on the number and severity of Internet fights.

The 2018 Hackaday Prize
Just another keyboard design, but unlike other ones that one is thought for fast one armed typing.
Project Owner Contributor

Using an old keyboard PC and a new keyswitch, I made a one-key keyboard
Project Owner Contributor