ENIAC and the FlipFlops

Ridicule doesn't kill but HV does. I hope to avoid both while using some 1Ж29Б-В and 6Н21Б

Hahaha it sounds like a Rockabilly rock band :-D

More seriously I'm gathering my thoughts after (re)finding the sources and (re)interpreting the data.

I looked at the paper by Burks about the design of the ENIAC and admit it's a really impressive project. Somewhere it says that the flip-flops have two versions : one version with one triode and one with two triodes. The 2T seems easy to grasp but how is it possible to use only one triode ?

It became clear when I looked at that project (thanks to Tom Anderson) that tries to recreate a single ENIAC flip-flop. A few things became apparent :

Further looking at the ENIAC schematic, I am shocked: 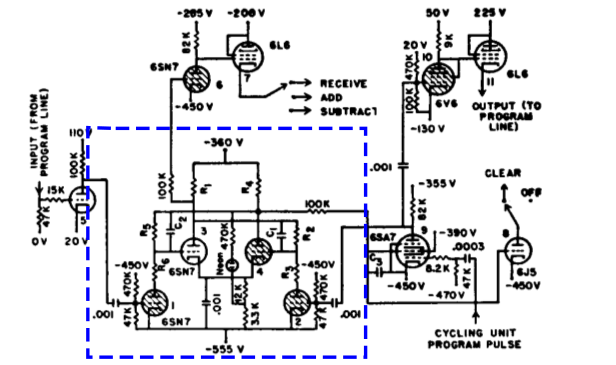 Seriously guys, how many power rails do you even need ?

I was complaining that I had to provide 2 supply voltages (filament and anode) but this is simply insane.

OTOH this explains how they do level shifting and AND gates: they shift the tubes, not the signals. This is getting insane...

Speaking of big bad supplies, I remember I hacked one together 20 years ago out of an old guitar amp transformer, as I wanted to use it to create my own LM3886-based bass amp. This is a symmetrical high-current, pretty high voltage supply that could work with this project... Now I have to find it in my archives :-D