After I completed the instruction switch panel, came the necessity to build the corollary: the panel that displays the instructions. I had a sketch but soon realised that the system used too many relays, making it both power-hungry and expensive. For example, the hexadecimal display with 4 digits requires 16×4 LEDs, no big deal, but also 15×4=60 relays to demultiplex the nibbles ! According to the display: 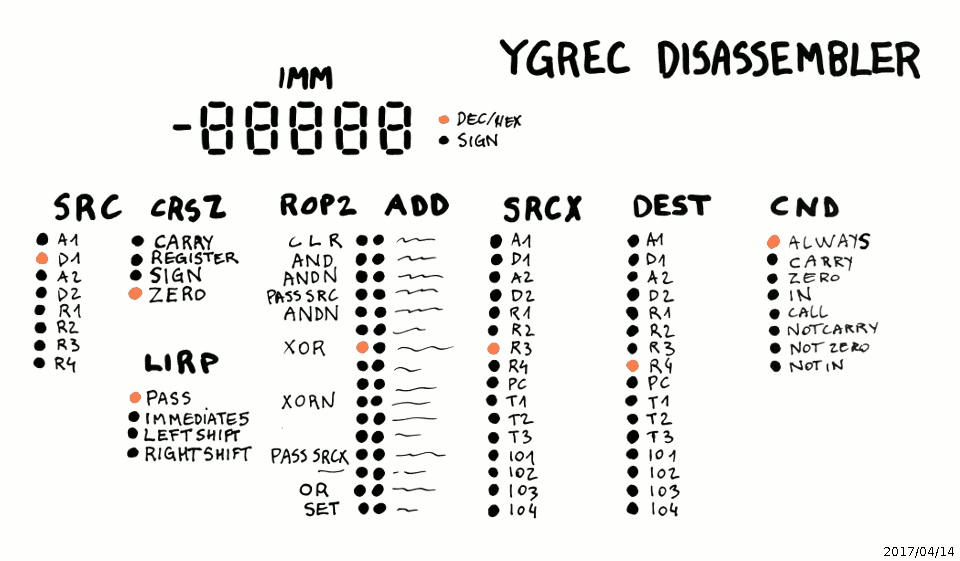 so the total is 141 relays, or 4 boxes of 36 pieces, with some pretty high fanouts (despite knowing strategies to balance them). This also uses a significant amount of PCB surface !

Discussing with @Dr. Cockroach about a similar concern with his #IO - The Inside Out Cardboard Computer - bis, (he uses a servo to point to one out of 16 numbers), I came to the conclusion that I should try a galvanometer. It's reasonably cheap and simple : a R/2R network driven by one relay per bit, and you're done.

However readability is not great and despite having found a 0-15V model (which is great for displaying from 0 to F), this causes the other problem of getting 15V (actually 16 !) in the first place... See the rest in the log Relay DAC

Then I realised that I got the initial MUX thing wrong.

The light dots can be either a LED (which is a diode) or a Glühbirnchen (which can be wired in series with a diode). I couldn't find suitable flipdot elements (too large, harder to drive) so let's stick to diody elements.

MUX4 isn't really a problem with only 3 relays but... This can be reduced to only two ! The LED can be arranged in a 2×2 array with one relay for the rows and another for the columns. It's only one relay saved per MUX4 but the fanin is just one coil per bit. 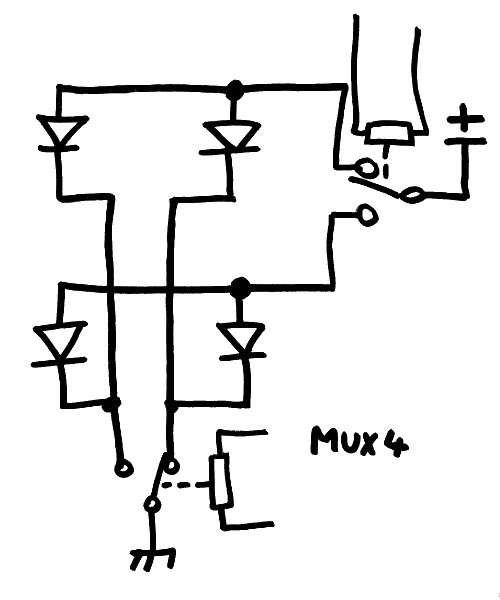 The same idea can be extended to the MUX8 : one MUX2 for the rows and one MUX4 for the columns. But wait ! the MUX4 is already an array, so we need to go in the 3rd dimension... With LED, this is easy as connecting them in pairs with reverse polarity. As a result there is one relay for the 2 rows, one relay for the columns, and one relay that selects between +3V and -3V. 8 relays are saved. Splendid ! 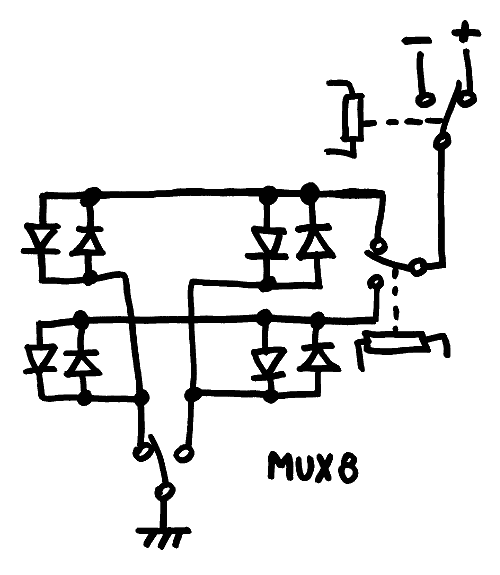 For MUX16 however, I'm not sure a 4th dimension exists... This forms the bulk of the display, the CND and SRC fields can use single-dotted display but the IMM field (4 hexadecimal digits) would be awesome with 7 segments (I'm ok with the diode matrix). At this point I'm forced to use a "standard MUX4" for the row, with 3 relays instead of two, and one bit has a higher fan-in than the others (which is quite annoying because I'd love all the board's bits to have a single coil fan-in). I could cheat with a DPDT relay but no model matches the RES15's characteristics. Anyway, MUX16 is reduced from 15 relays to 5, thanks to diodes ! 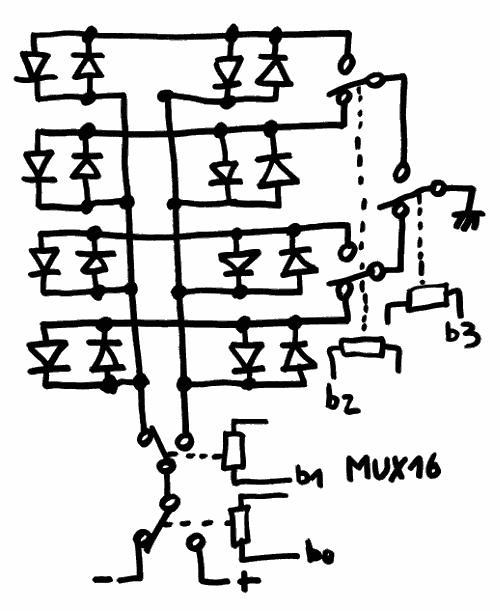 MUX32 would use two standard MUX4 and total 3+3+1=7 relays instead of 31. Impressive what some careful design can do :-)

I'm concerned however about the imbalance of fan-in between the various bits, this makes the design more complex. I could add resistors in series to balance the single coil signals but it's wasteful...

Another concern is the digital display : bipolar matrices don't ease 7-segments decoding. I'm thinking about the #"Lixie", an LED alternative to the Nixie Tube approach but I'd need a tiny version and readability would be worse than the large displays...

20170323 : OK, another simplification : what if the digital display was in octal ? This would save 4 relays (though unlike Seymour Cray I'm not an octal guy).

Even more desirable: more input signals will have a fan-in of one coil.

I'm trying to come up with a "4th dimension", and I was thinking about voltage or current. It's easy to turn a light above a higher threshold (add some diodes in series) but not to turn another off. Unless there is a relay somewhere... So this is going in the direction of using an input relay to amplify the signal.

I'm also thinking about an optical system that could replace the Lixie...

I can see now