The experiment that I wrote about yesterday was actually carrying two gyroscopes: The one in the MPU6050 discussed then, and the L3G4200D on board the 11DoF. This gyro was connected to the Loginator by SPI running at 1MHz. The 11DoF tab was oriented such that during the South integration, +X was East, +Y was Up, and +Z was South. In the same integration, the MPU tab was oriented such that +X was West, +Y was South, and +Z was Up (not Down as marked on the board -- the silkscreen is wrong, proven by the positive signal on the +Z MPU signal.)

So, we match up axes as follows:

Therefore we just perform the calculation using +Z on the 11DoF just like yesterday we used +Y.
The result doesn't look so good. First, data from yesterday, showing what a detection looks like: 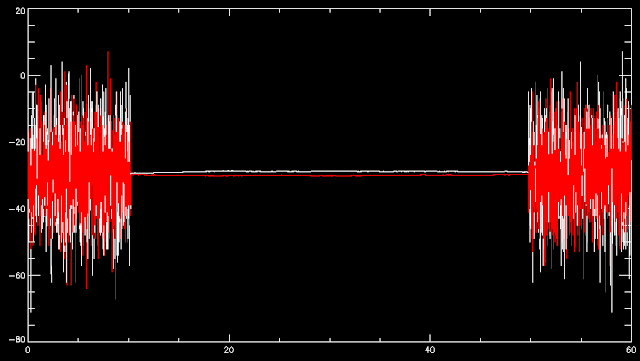 This shows 1 minute of data from before and after the rotation. The noisy part on both ends is 10 seconds of raw data, and the smoothed bit in the middle shows a 2000-sample (roughly 20 second) boxcar smooth. The white data was with +Y pointing north, and the red data was with +Y pointing south. In that middle region, the difference is due to the rotation of the Earth.

Now, the data from the L3G, also taken yesterday, but not reduced until today. 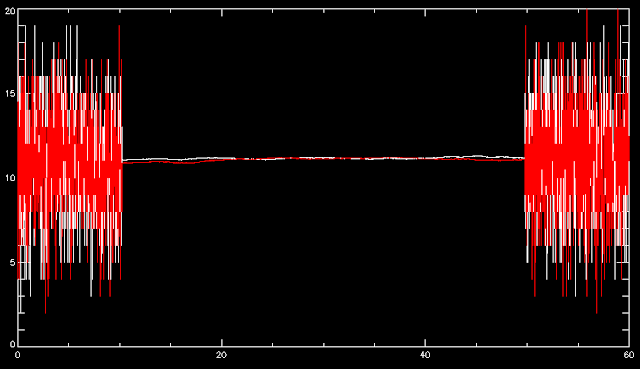 Since the signals cross, there is no clear detection, even with a 20 second boxcar average. Why not? As it turns out, this sensor was set to 2000°/s, its least sensitive setting, with 1/8 the resolution of the MPU. So, it's not a fair test.