Shields for the D1 Mini ESP8266 board using the ISSI chips

I recently got a hot air rework station (a cheap Chinese one), which allowed me to revisit some of my failed assemblies with the QFN chips, and fix them. Yes, the problems I had were partly due to missing filtering capacitors, but also due to bad soldering. With the hot air I'm getting 100% success rate, which is a 100% improvement from the manual method. Yay.

One of the boards I re-did was a breakout for the IS32FL3728 chip with the audio pin broken out. Since I also had a small microphone breakout at hand, I decided to try the equalizer mode of that chip. There are some good and some bad news.

The good news is that it works pretty nicely, blinking the LEDs in time with the sound. The bad news is that since I completely scrambled the order of rows and columns, for easier routing, and then fixed id in software, the hardware equalizer, which doesn't know anything about my row/column remapping, doesn't really look like a proper equalizer.

So I sat down and re-designed the breakout, paying attention to keep the rows and columns in order. Turns out it was still possible to route everything (I think I'm getting better at it), and the new breakout is now ordered: 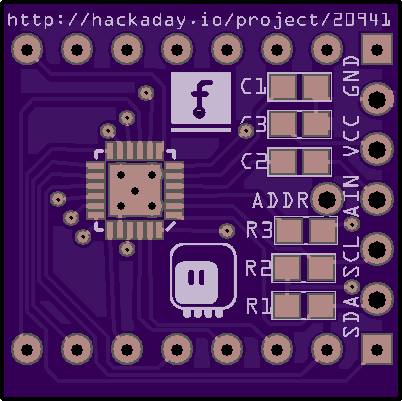 It's exactly the size of the matrix, and I got it on a thin PCB. But the best thing is thet there are some empty areas left on that board (where the sheep and the Fritzing logo are), and I could probably fit a small microcontroller in there, that would just put the chip in the equalizer mode, and a small microphone. Just add a coin battery, and you have a fancy wearable equalizer display... I need to do some testing when the boards arrive, but it seems promising.

A Quick Tour Around the IS31FL373x Chips