Signal to Sound: What the Microprocessor Does

Let's inspire the next generation with exciting and educational kits that anyone can build. Want to create your own theremin?

Last time, I explained how a dual 555 timer created frequency signals that changed with capacitance. Now, I'll explain what happens to these signals inside the microprocessor.

The choice of Microprocessor was very limited, because I needed something in a DIP package that could be placed onto a breadboard. In the end, I decided on a PSoC 1. This is an old generation of chip and the development software required me to manually specify how blocks connected, but in the end I learned more about how System on Chips worked.

The images in this post are from the digital and analog wiring diagrams from the PSoC Designer software package.

The first step is to read in the frequency signal. I use one 8 bit counter each for volume and pitch. The counter increments every time the input completes a cycle. Every so often, an interrupt reads the counter value and compares it with the previous count. In this way, the processor knows how many times the input has cycled in a given time. By making multiple readings, a 12 bit value proportional to input frequency is generated.

The next step is to calibrate this signal against a baseline, and to filter out any ripples. Also, math is done to correct for the non linear nature of the sensor: sensitivity near the antenna is reduced, and sensitivity away from the antenna is boosted.

How all this happens is the "Secret Sauce" of the project, the one part I wish to keep proprietary. However, if you've read this far, I'm sure you could make similar software if you try. All it takes is a graphing calculator, a basic understanding of feedback and control loops, and a few months of trial and error.

Creating an output from such a small chip was very tricky. I did not have the memory or speed needed to store or use a lookup table with output a predefined waveform. Instead, I broke the output into three stages: Frequency, Volume, and Filtering.

The frequency generating block is shown above. A 16 bit PWM block creates the desired output musical pitch, from C3 to C6 and everything in between. And I do mean everything: the module can create more than 53000 discrete frequencies between the low and high limit (the rest of the 16 bit range is lost on each end).

The output of the PWM module is routed to one of the I/O buses. 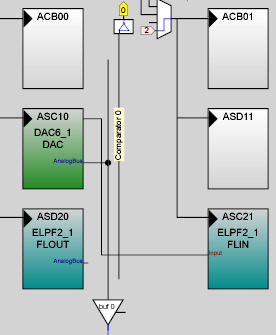 Instead of going to an output pin, the signal from the PWM module heads towards the analog blocks. With this line of code:

So, the PWM creates a frequency that modulates a DAC. And changing this DAC changes the amplitude of the signal. But the creates a harsh square wave with plenty of harmonics. To create something pleasing to the ear, an analog filter is created inside the PSoC.

Thanks to the magic of Switched Capacitor circuits, I create a low pass Buttersworth filter using the analog blocks ASD20 and ASC21. After filtering, the tone is softer, closer to a sawtooth.

The output signal is sent out to an IO pin and connects to one side of a magnetic speaker. The PSoC can sink twice as much current as it can source, so the other side of the speaker connects to VDD.

So, that's how the microprocessor (and assorted digital and analog blocks) turn a ~800 kHz and ~500 kHz signal into pitch and volume. But there's more going on.

Up next, I'll explain the design and firmware decisions I took, to account for beginner mistakes and to teach the troubleshooting process.

Turning Capacitance into a Signal