So why do we need to distill barley wine to produce concentrated alcohol? Apart from just getting drunk, the alcohol can be used sensibly as an extremely effective medicine for stress relief and a useful aid for social integration. The alcohol produced has a very pleasant & subtle 'barley' taste & can be infused with herbs & berries to produce more specific medicines or drinks rich in antioxidants etc. For example, whiskey infused with hawthorn berries is a well known heart tonic.

Other more esoteric uses include the use in shamanic rituals where alcohol facilitates the trance like state required to travel to other spiritual dimensions.

Being a pirate, we use the alcohol to gain the courage necessary to climb the rigging & trim the sails in a storm. A good stock of concentrated alcohol is essential in any successful pirate ship.

1. Alcohol sensors for detection of leaks / process errors.
2. Internet graphical user interface (GUI) via GPRS.
3. Intelligent Data to Voice (D2V) interaction - the machine describes to you what is happening at any given time with it's own intelligent 'robot' voice.
4. Fully hackable Arduino code.
5. 'Below floor' electric heating for safety compliance
6. Air cooled condenser - no cold water supply needed.

Historically, in Europe at least, it used to be very common for enterprising folk to travel around the land with their distillation equipment strapped to the sides of their donkeys providing a valuable service for owners of orchards and fruit bushes who wanted the produce turned into alcohol rather than having it wasted or eaten by birds and rats. In modern times, due to the advances of science, the equipment necessary for the process is much more sophisticated, but could, in theory, still be strapped to the back of a donkey.

It's not an old wives tale - The process of distillation used to be rather dangerous, often involving the lethal combination of naked flames, self intoxication and explosive alcohol vapours. Now, thankfully, there is much more awareness of sensible drinking and the potential dangers of industrial processes.

For me, the challenges are to automate the machine and make it as safe as reasonably possible, giving us lots of scope for using all kinds of weird and wonderful gadgets and sensors to monitor the process and minimise the risk of explosion. 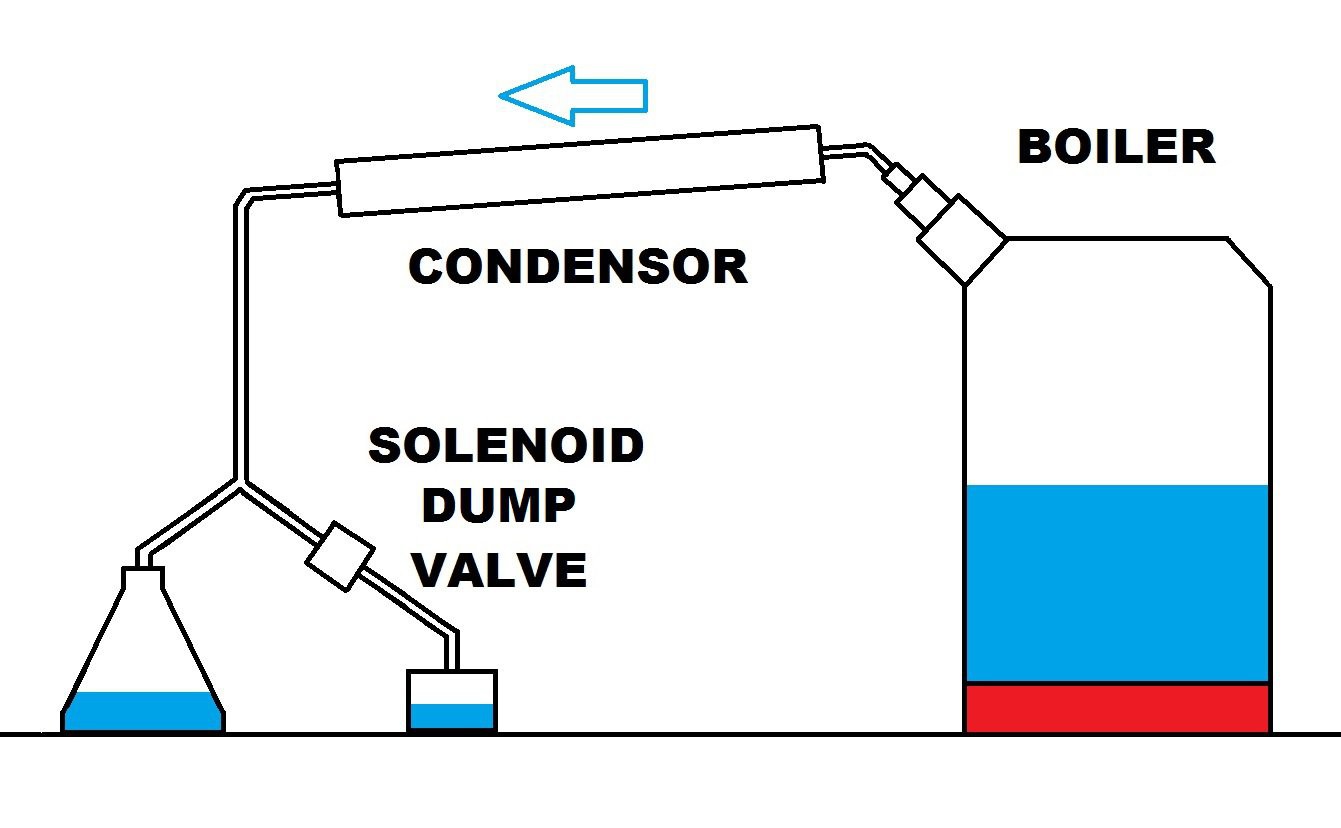 Home made barley wine (beer with no hops) or cider is pumped into the boiler and then rapidly heated to about 85 degrees C after which the power is reduced and the alcohol starts to boil off. Vapour travels into an air cooled condenser and then trickles out the other end into an inline hydrometer.

The hydrometer is connected to a pressure sensor which detects the level of fluid at any given time and a solenoid 'dump valve' at the bottom of the device allows the product to be dumped into a separate container to separate out the methanol.

The rest of the product goes into the conical flask and the process finishes when the boiler temperature hits a preset level controlled by a potentiometer on the control panel. 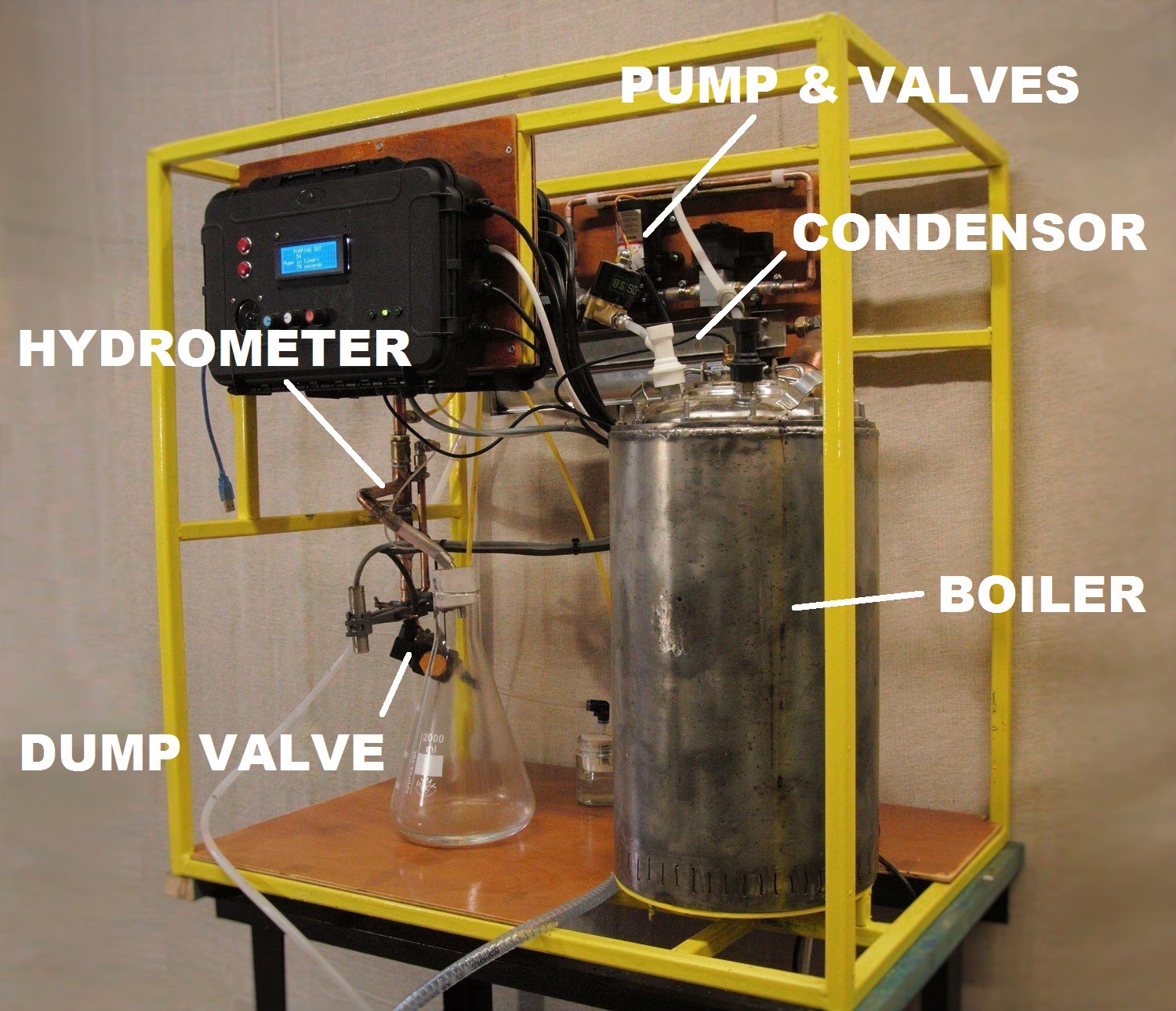 All processes are monitored graphically through a web page via a GPRS data transmitter in the control panel: 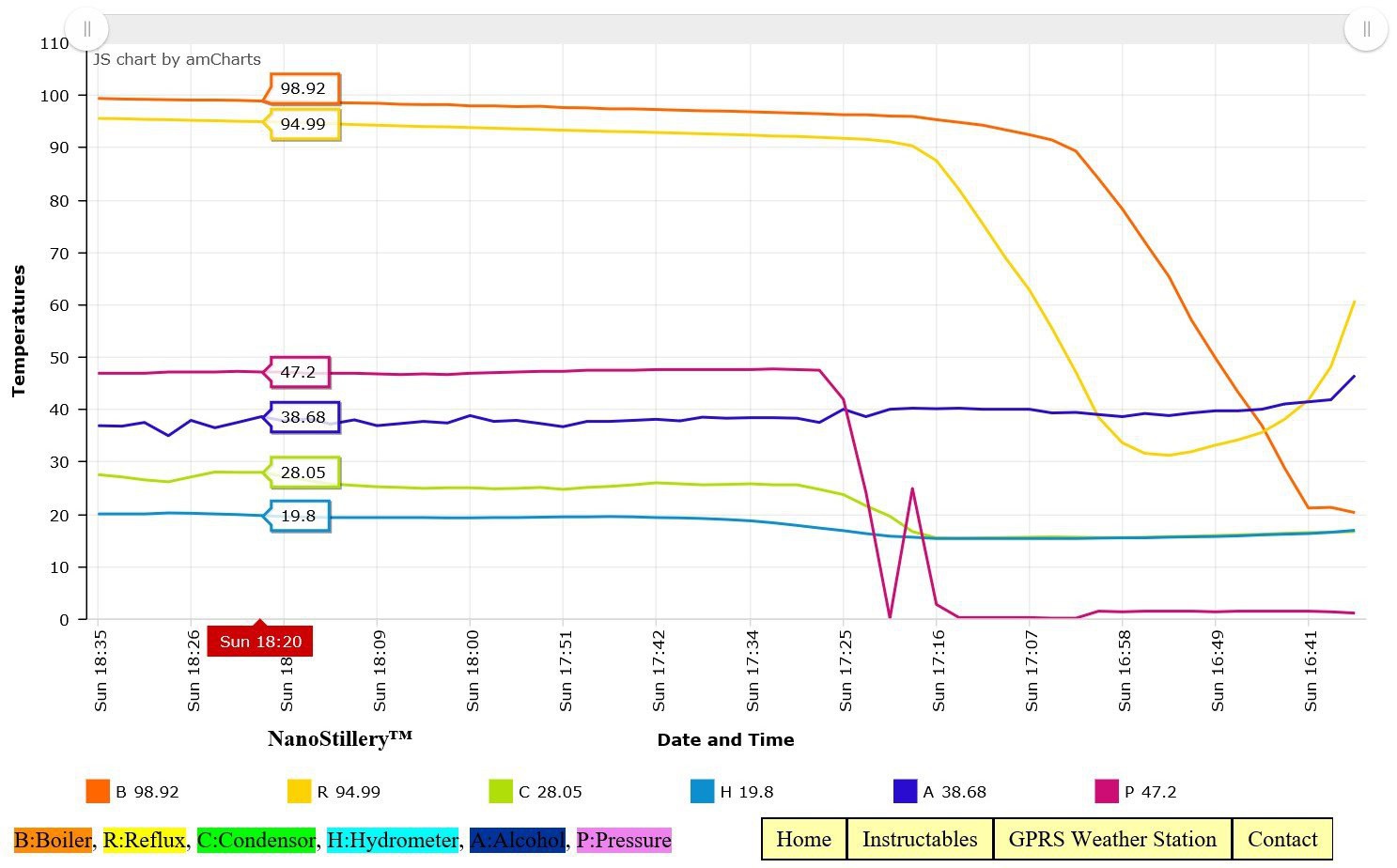 You can see the results for the last batch, or even the current one, here: http://www.goatindustries.co.uk/test/index.php

Awesome project! Congratulations on moving on to the finalist
round!

Nice project and quite useful.

I'll make one if I can distill Tequila with it!

Oh BTW, ethanol may be a source for hydrogen in hydrogen powered vehicles, add water and some other catalysts and you can get H an CO2. Chinese doing this with methanol and ethanol is their next target. So you could create your own fuel. Just make a bigger one.

You can definitely make Tequila with it though I'm not sure what the recipe is. I'd have to do some Tequila tasting / googling.

This machine is more of an 'artisan' still rather than for making ethanol. A lot of the products are complex flavour compounds and it would be a bit of a waste to burn it in an engine. Tall column stills are used for ethanol rather than this short squat one.

PS. Still struggling with the cell phone signal booster project. In theory the LimeSDR should now work, but my phone does not respond. It's hard to know what's going on without a second LimeSDR to use as a spectrometer :( I'll be working more on the hardware based solution when it rains again.