Little Sergei, the retired BattleBot learning to serve as a robot assistant

"Little Sergei" is eager to begin working again, but he's been retired a bit too long. He needs to introspect and make sure those old bones are still in working order.

Looking through, the battlebot has:

Unfortunately, the battery packs are puffing a bit. This is indicative of potential damage in the battery. Possible, as the robot/battery has not seen use in two years. While many have continued to use puffed LiPo batteries without issue, there is still a chance of catastrophic failure (fire).

I'm no battery expert, and I lack guard sleeves and fire-proof storage containers. LiPo batteries are fairly cheap nowadays, so the better action is to simply buy new ones. 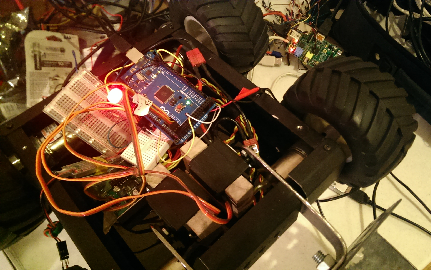 The LiPo batteries are connected in serial, so the system would expect 14.8V/1.6Ah of power. I don't have a variable power supply with me at the moment, but I can power the Arduino with an AC adapter/computer. The control pins are already connected, so I just need a temporary wire from Arduino 5V to Servo power pin. Using a Raspberry Pi, I sent a few motor signals through the Arduino, which moves the motors.

The attached computer's wireless will be used instead, so the XBee component can be removed.