I like to get horizontal now and again, who doesnt. But I dont like hangovers or spending money on freely available things.

Saccharomyces are really tough to kill, they live on our skin and food, tolerate being dried and frozen as well as suffocation in up to nearly 50% solutions of their own waste in an oxygen-free environment. I've accidentally overheated them myself to around 38 degrees C and they survived.
Using atmospheric O2, yeast just breed and give off Carbon Dioxide - this is what makes bread rise, as the bubbles of it foam the dough. Contained in a vessel that allows the CO2 to build up and exclude the oxygen, yeast switches to anaerobic respiration and excretes alcohol as well, as a byproduct.

Making the solution to guarantee that the yeast excretes a certain amount of alcohol as a percentage before starving to death is an art in itself. We call this process brewing, and its been evolving since 11BC.

The brewing process itself

Early civilisations in China left archaeological evidence that mankind had a working relationship with yeast as far back as 11BC, but our species co-opted it much earlier than that. The gene required to process alcohol without serious ill effects could have entered our genome when we left the trees and began ground foraging fallen fruit, but there is evidence that Mead - honey-wine - was discovered before this. Waterlogged bee's nests have been found which have fermented naturally and its likely this pre-dates even rotting fruit in our diet.

The Mayans had a culture of alcohol a few thousand years after China. They made alcohol in a shallow bowl covered with reeds, covering proven bread dough soaked in water. It was left to ferment and drunk through the 'straws' of the reeds. It probably wasnt very strong, a couple of percent and tasted revolting to our refined palette. It would also have been crawling with live yeast and been very laxative as a result.

From experience. Do not drink live yeast cultures unless you are prepared to lose weight rapidly... ;-)

Modern brewing practice is highly developed to exclude the yeast and other things floating in the Bread of Life, as Ale had become known by the Middle Ages. It was routinely drunk instead of water, which was a dangerous thing to do before sanitation. Several pints a day were consumed, starting in childhood - small wonder the art of the time portrayed us as pot-bellied, literally. Yeast's exophillic nature meant that it could be used to purify water crawling with aerobic bacteria that also cant tolerate alcohol in the concentrations we enjoy, and every household brewed ale in large quantities.

The industrial Revolution changed all this. Sanitation and mass production changed Ale drinking forever and breweries sprang up to supply the populace with Beer - Carbonated and hopped Ale. This is the primary difference between the two. Ale is brewed without hops, Beer is brewed with as a preservative. All bitters are Beers, not Ales, unless they are bittered with other herbs from the English gardens of the time, so most Real Ale probably isnt. It is real beer though, and delicious...

Contemporary brewing has returned somewhat to the Middle Ages again, with the advent of the Microbrewery. There isnt anything special or different about the process developed by the breweries from the household ones, but it is done on a household scale and without production machinery. I began brewing using kitchen equipment but very rapidly outgrew even a stack of demijohns. 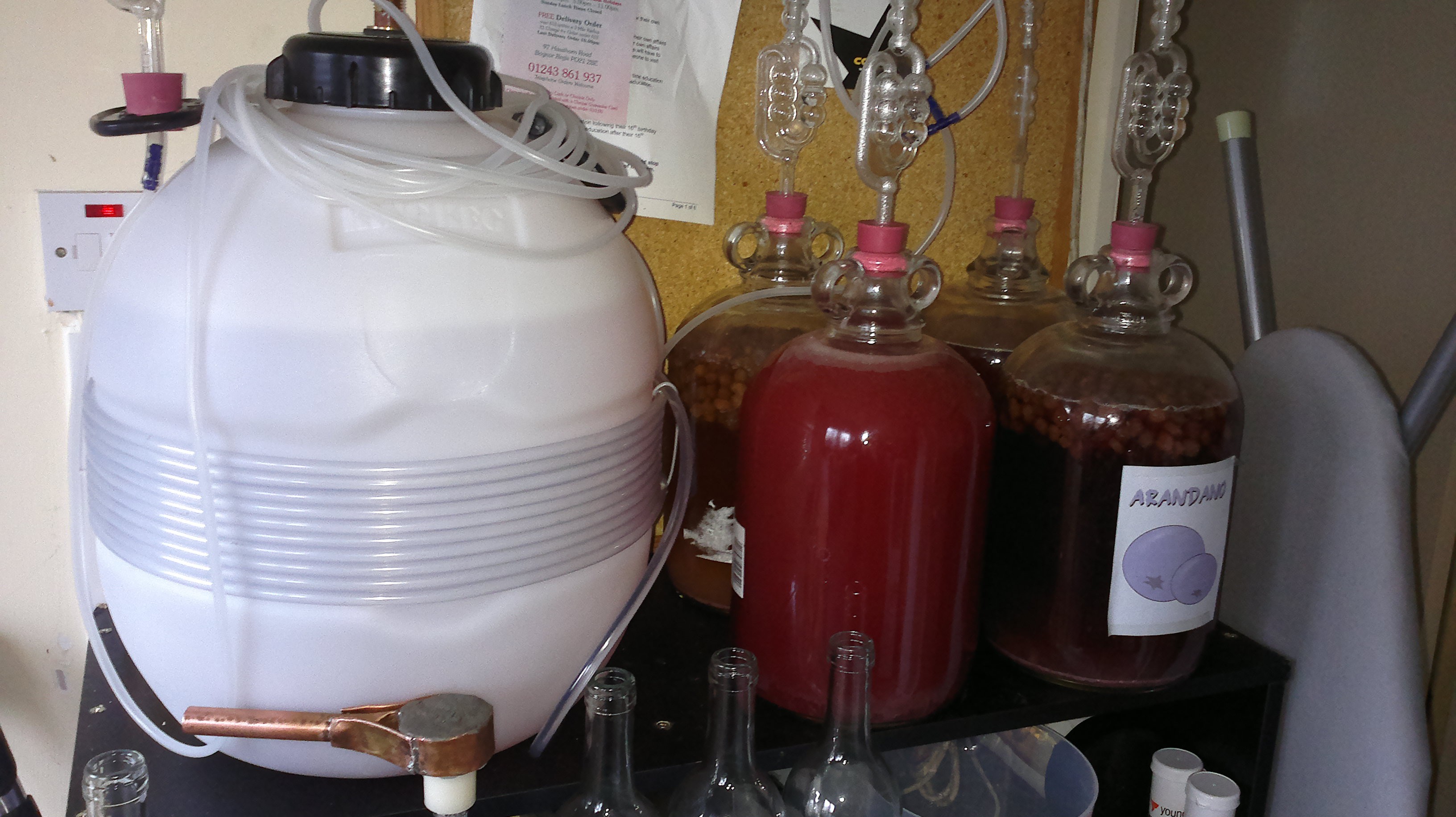 On the left is a lager system, which is brewed at a lower temperature. I vented the CO2 produced out of my kitchen, lager reeks of rotten eggs as it brews, sloooowly. The larger hose wrapped around the barrel carries water cooled by a pair of Petlier tiles to keep the temperature down to about 7C. Beer brewing really needs to be done at scale. 40 pints (23L) at a time is commonplace, and brewing equipment is sold to accommodate this, as are kits to make beer at home using it. Very expensively I might add. You pay the same for the ingredients as you do for the end product, minus the taxes and slices by the suppliers. All the same, it works out at around £1 a pint - half the price of a supermarket beer, takes a month to brew and occupies significant space. Kits are simple, they contain condensed Maltose extracted from grain, and the hops needed. Add water and yeast, you get half-price beer. But it isnt hand-made, a brewery has done all the hard work for you to assemble their beer at home.

Because the equipment needed to make Malt Extract is extensive, I decided to miniaturise it so I could do the whole thing at home, buying grain and cutting out the brewers.

It became Brewnel, the Nano-brewery. Here is the original design, including the all important parameters required to get a clean extraction of maltose, without the proteins and starches that make for a cheap and nasty tasting beer. 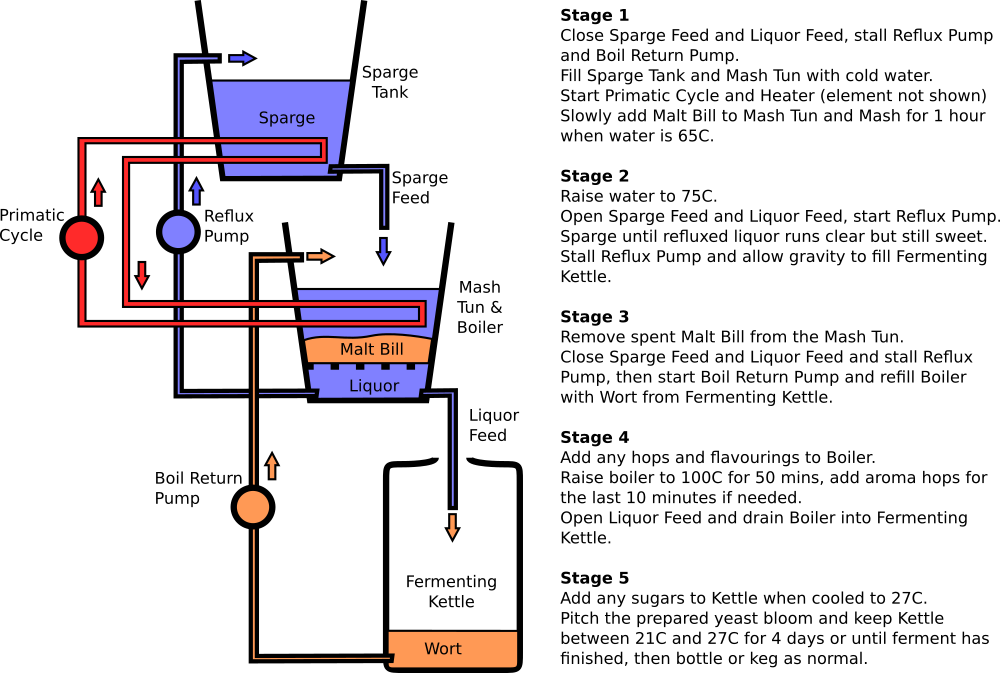 Mashing is the process of releasing the maltose using hot water without de-naturing the amino acids and wrecking the flavour. Boiling the grain gets all the sugar, but it tastes horrible. Before Mashing, the grain is known as the Bill, during it is known as the Mash, and during Sparging it is converted to Liquor. Finally the cooled liquor ready for fermenting is known as Wort.

Sparging is the process of trickling and filtering to remove all traces of grain from the solution. This is done by using the grain itself to plug the drain hose and filter the particles of flour and bits of husk from the liquid.

Pitching refers to the process of preparing a small quantity of Wort with yeast and allowing a bloom to develop, which is then dumped into the main kettle to begin fermentation. This is necessary, as the bloom is hard to start in the kettle without oxygen.

Boiling converts the soluble starches to sugars, and the sugars to Maltose - a specific glucose obtained from grains, sterilises the solution and provides a good environment for the yeast to begin anaerobic respiration quickly, as there is little O2 in distilled water.

In order to save space I combined the separate tanks into one, and used a filter to separate the grain from the liquid while pumping it against gravity to allow the separate processes to take place in the same tank. 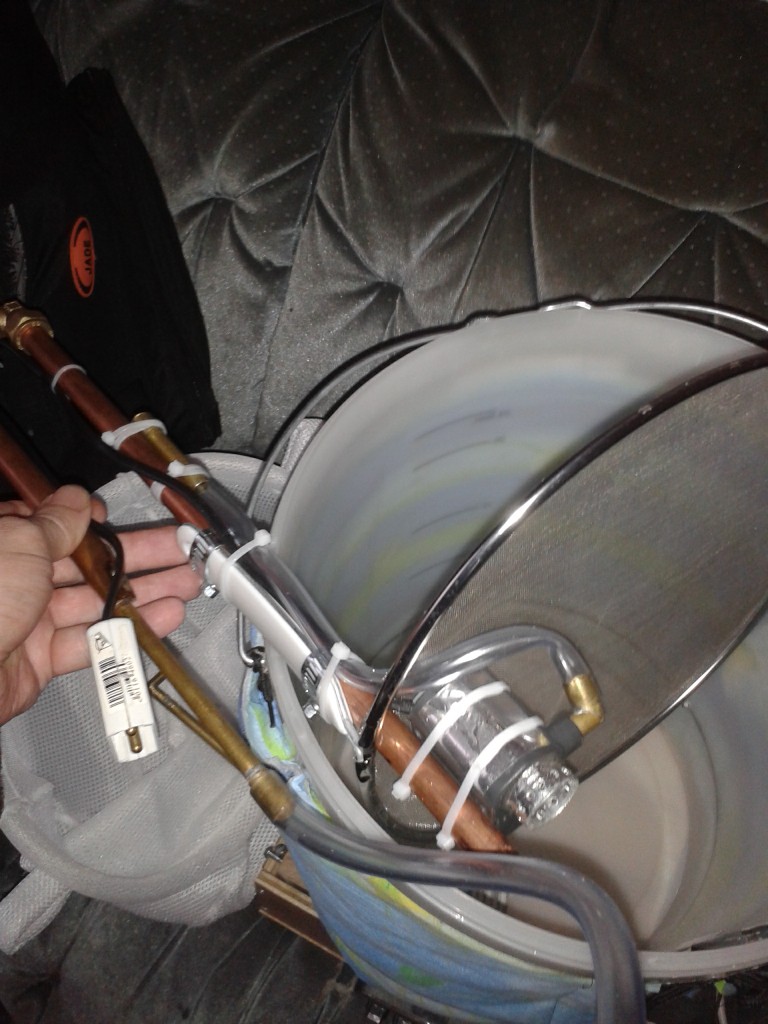 Liquid is pumped from beneath the grain to above it, while heating it to the required 65 degrees, extracting the Maltose efficiently. The grain is contained in a bag so it can be removed for the temperature to be increased to boiling. The pump assembly also comes out for this. 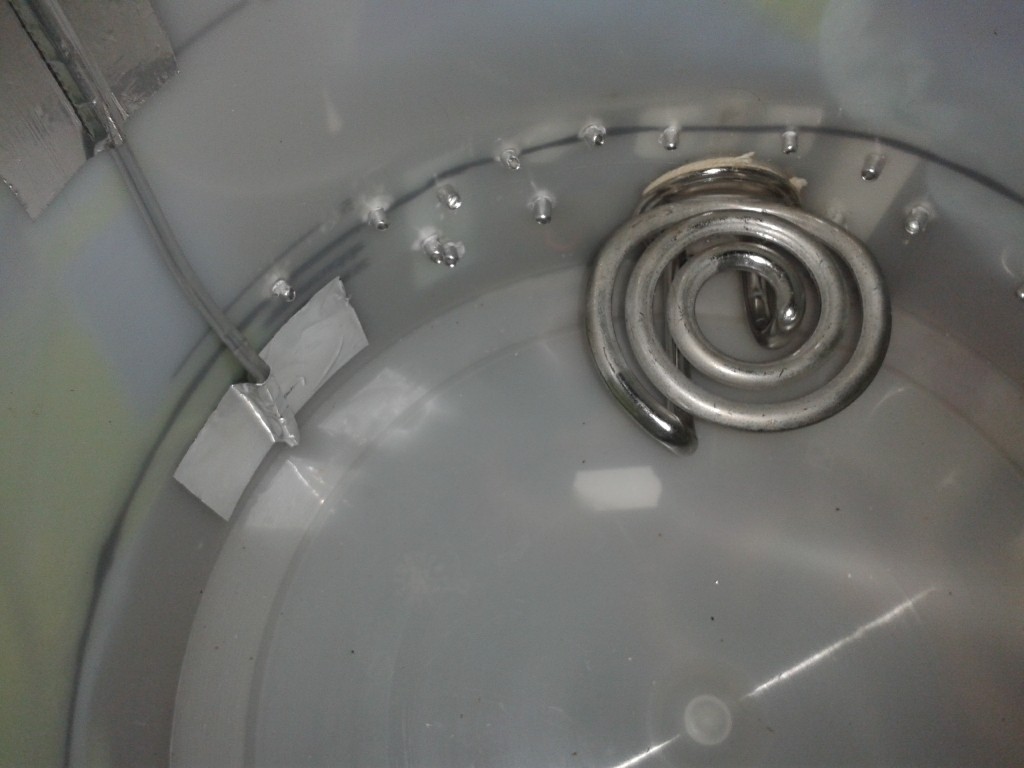 Heating element and Thermocouple to sense the temperatures accurately. It's connected to an Arduino that switches the element with a relay.

This is the old software, I dont have the netbook any more and havent used this in a while, but summertime is brewing time so I'm getting ready for another season. 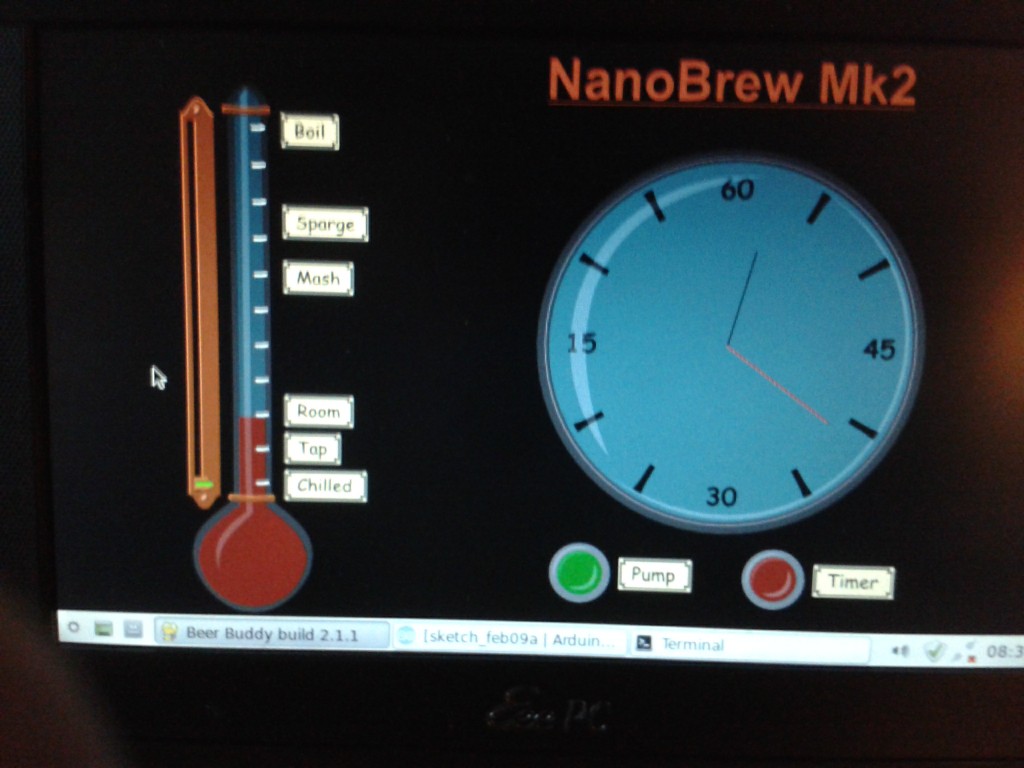 The software does quite a lot automatically. It calculates the volumes and times necessary to get a good extraction.

Assuming a final volume of 40 pints or 23 litres and an all-grain recipe, calculate as follows.

You will need enough water in the Mash Tun to cover the Bill after Mashing, and also account for the volume lost in evaporation during the boil. All volumes are in Litres and Kilos to take account of the differences in UK and US measurements, you will need to convert them first.

UK and US Lbs are the same, except there is no US Stone, it is just counted in Lbs.

Sparging should be done using the Sparge Pump for smaller volumes, larger volumes can be
Sparged using gravity alone. This is accomplished by setting the flow rates of the Liquor Feed
and Sparge Feed to a trickle, so that it takes an hour for the Sparge Water to percolate down
through the Bill and into the Fermenting Kettle in one cycle, extracting the maximum amount
of Maltose from the grains possible in one pass.
Passing the Sparge Water through the Bill several times over a shorter period will extract all
the available Maltose more efficiently and can handle variable amounts of grain, where a
single pass requires calculating and accurately setting flow rates - and only experience or
expensive equipment can give you that accuracy.

This is the final piece of the puzzle, the metrics base. It contains a spring taken from a set of scales, a known lever and pulley dimension, and a potentiometer driven by the pulley.

These were carefully figured out to allow the system to read volume by weight, as water is 1Kilo per litre hot or cold, and the grain is done by weight anyway. Eventually I will have valves that Brewnel can operate so it can fill itself with the right amount of water from the weight of grain in the tun and the desired final strength in ABV. 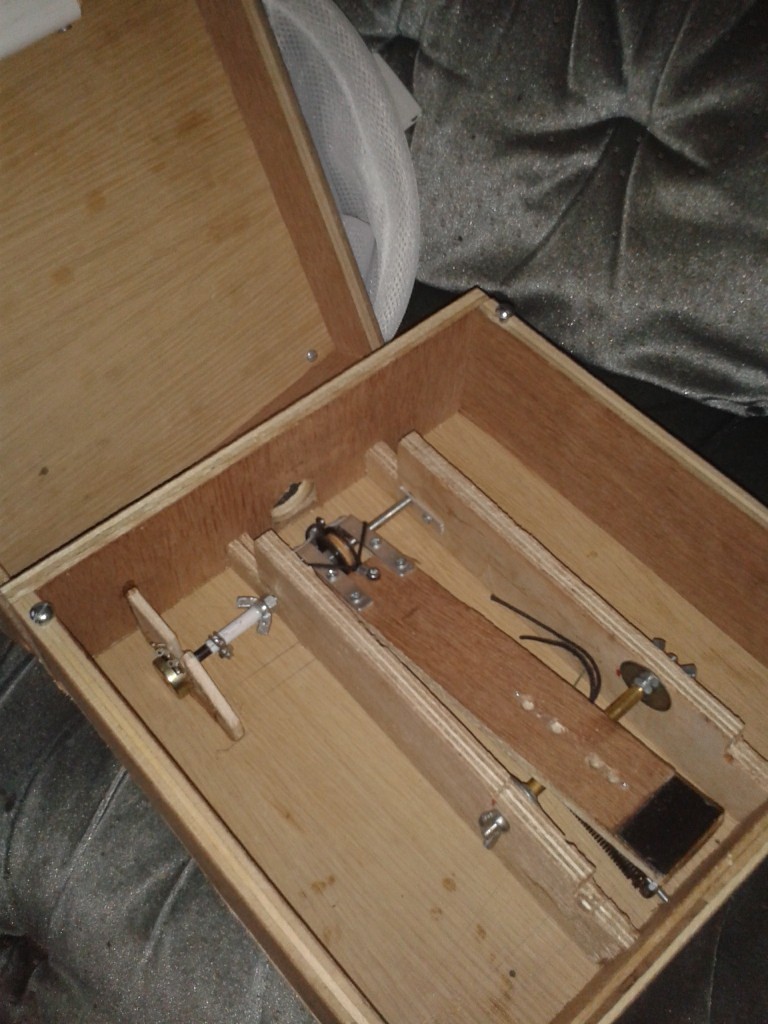 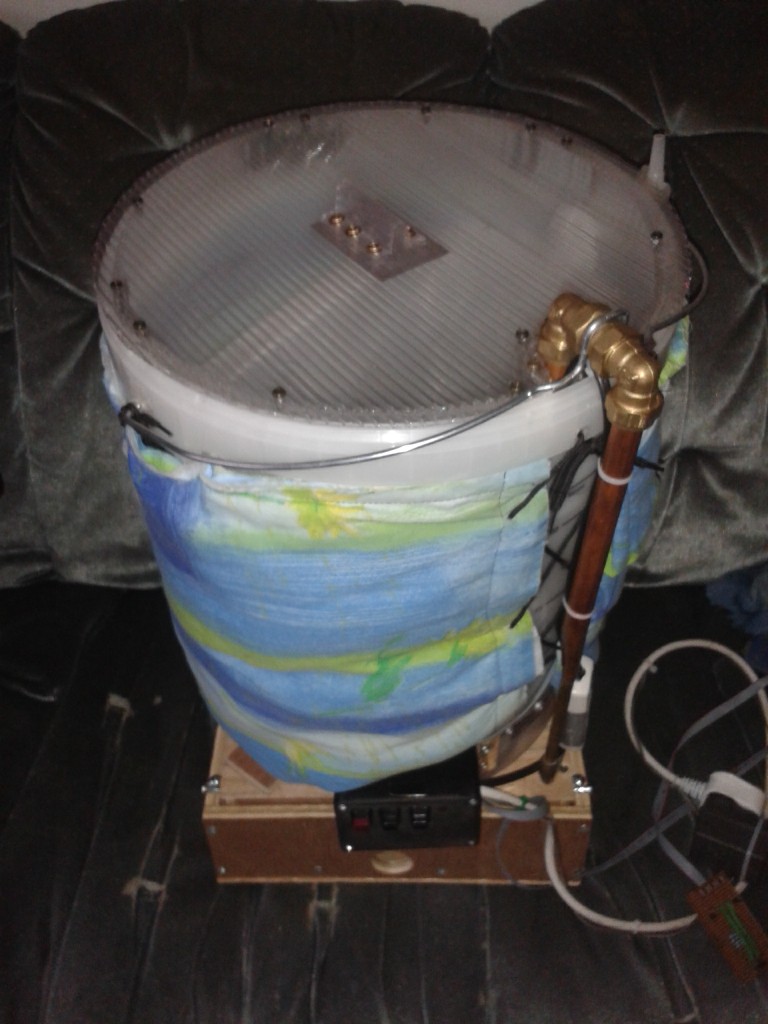 The siphon that goes over the lip is the Kettle feed, removing the need for a pump and valve that can handle boiling liquid.