I loved Futurama, and my favourite character is Bender.

If you're going to make a robot out of beer cans, you'd better choose wisely. And wise-cracking Bender is the most swearing-est, beerdrinking-est and cigar-smoking-est robot I know.

I'm not big on decorative animatronics, reserved for the Swingin' Santa division of robotics IMHO, but as the original Bender has a 6502, he'll have a Pi, its generational successor. Bender will react to movement and mimic me with his Voice Benderiser.

According to the Internets, Benders specifications are as follows. 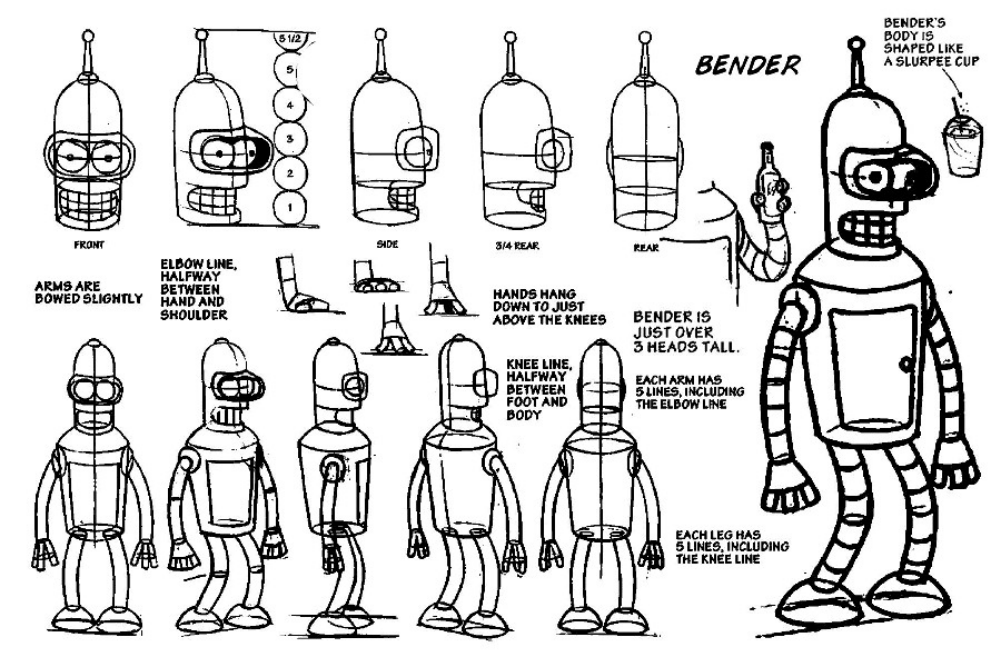 Bender is made completely from beer cans, waves his arms and legs and possibly has a camera, I havent decided yet. It would be neat. ;-)

The first thing to do was copy the way Bender moves. I've been meaning to do this for a long time but never had an excuse...

When I was young, I read an anthology of short stories, containing one in particular by John Wyndham. I dont remember the title now, but Wyndham was an incredibly descriptive writer and didnt need diagrams or even imagery to convey his thoughts. The story dealt with a Martian Probe sent to Earth on reconnaissance. Wyndham never described its agenda but it was portrayed as harmless, a scientific probe on legs, with a set of lenses on the front, and a diaphragm sounder, and a set of tentacles with grippers in the ends that it used to handle things. The 'author' of the 'account' had discovered the machine in his barn, taking some equipment apart, and then studied it...

Thus inspired, I came up with a mechanism I could build. 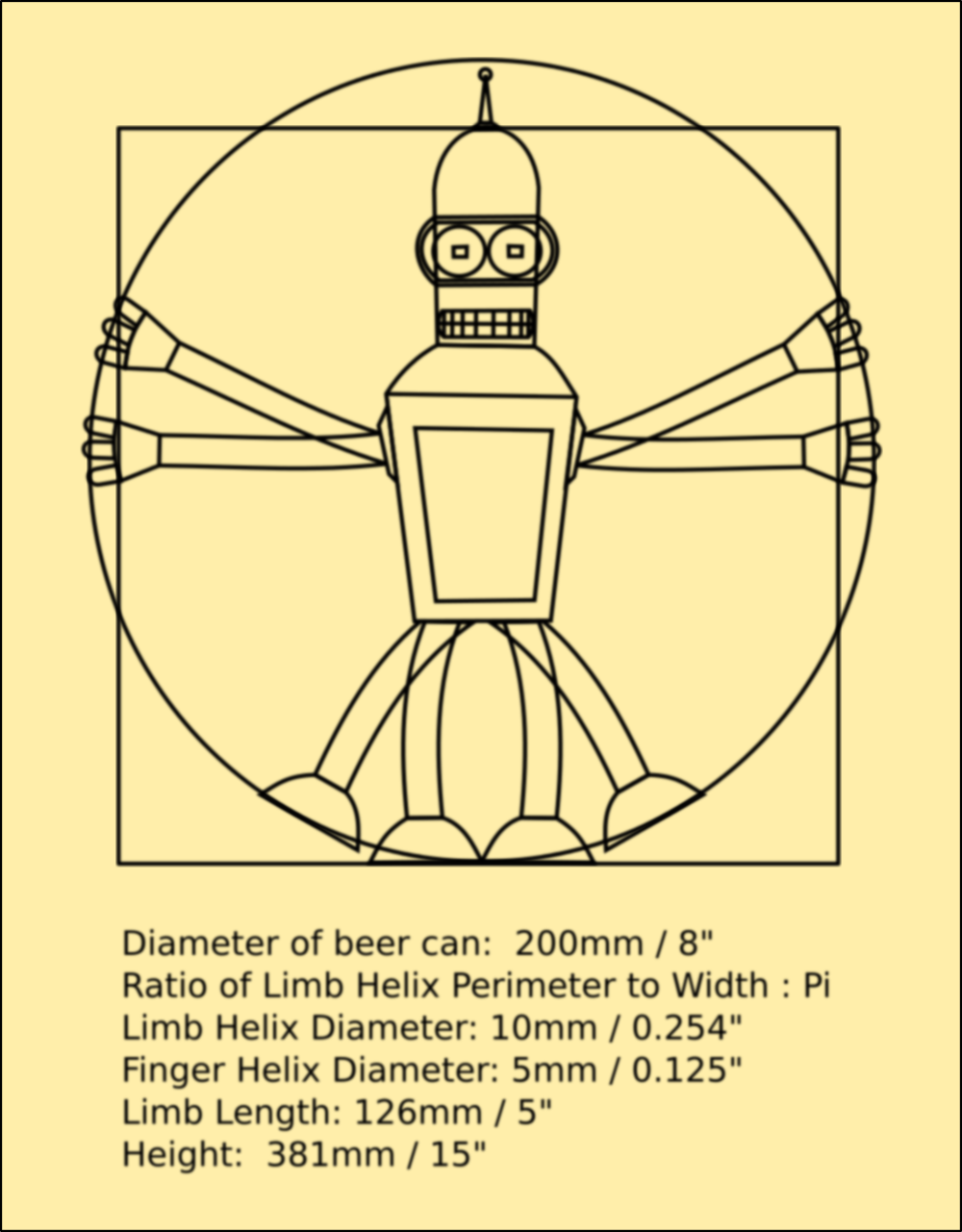 I tried this in cardboard first (of course) and it worked like a charm. I will probably roll this back into Origaime at some point as a result. 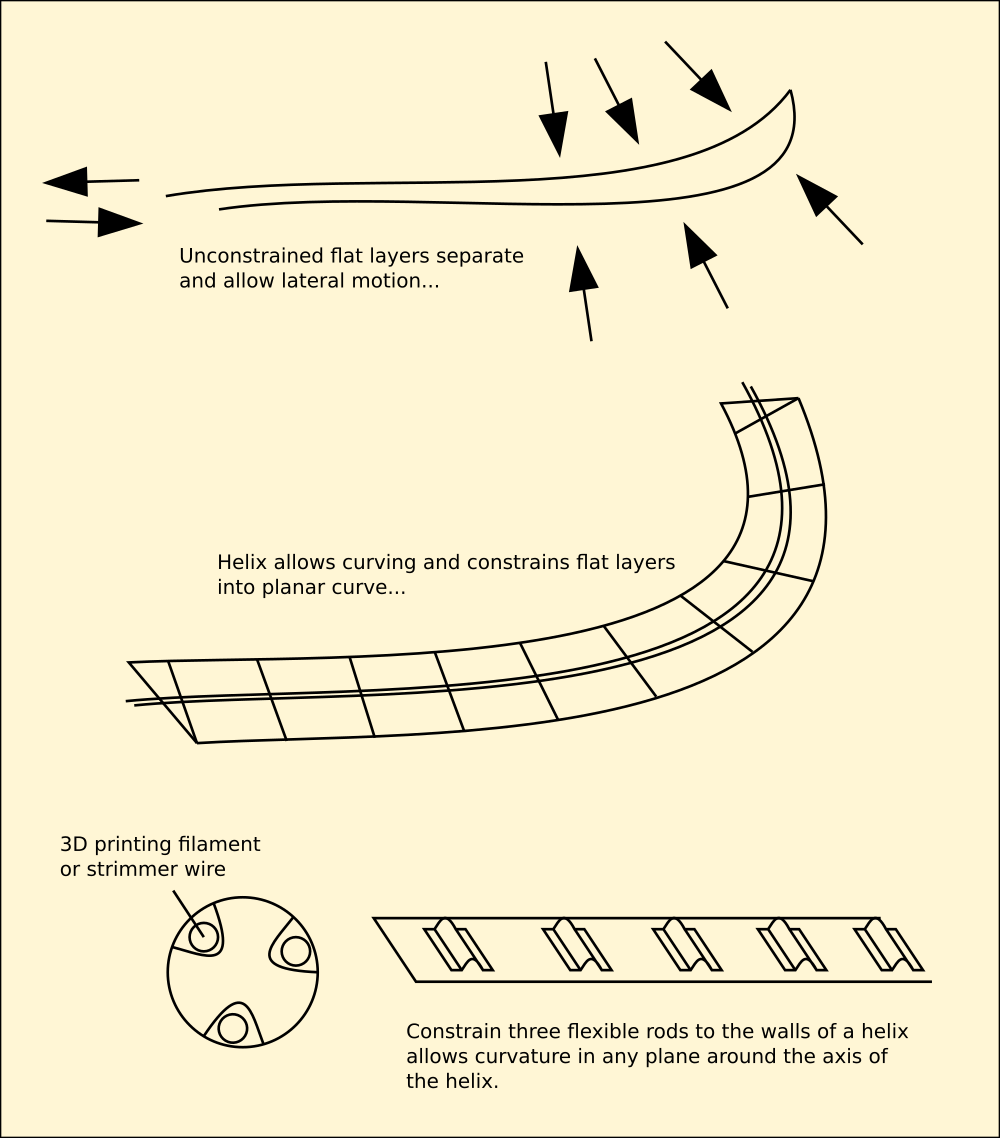 I'm not using three dimensional movement in the model Bender, but its entirely possible. The planar limbs look ok, and work enough like Bender's that I'll call this a success:

Pending for a Bending.

After a little bit of experimenting, I've found a good ratio for the diameter and width of the helix that stays nice and tidy and still has a good range of motion. A 1cm diameter leg is proportional to a model height of around 1ft, perfect. I wont use all of that, maybe 2/3 of the length. All it needs is a servo harness and I can build another three the same. Easy peasy, I found that the trick of running a strip over the edge of a scissors blade works for metal the same as it does a gift-wrapper's ribbon. 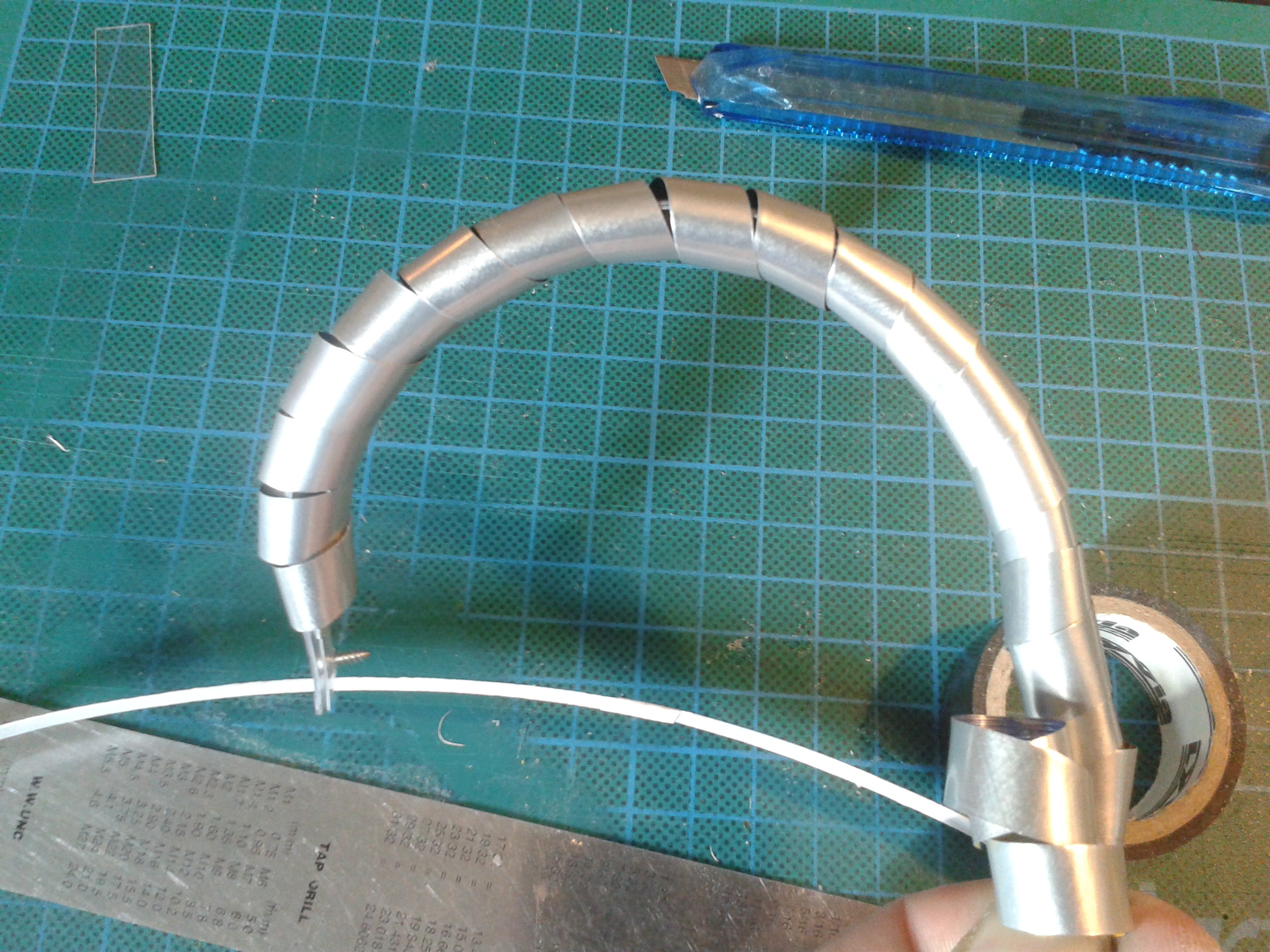 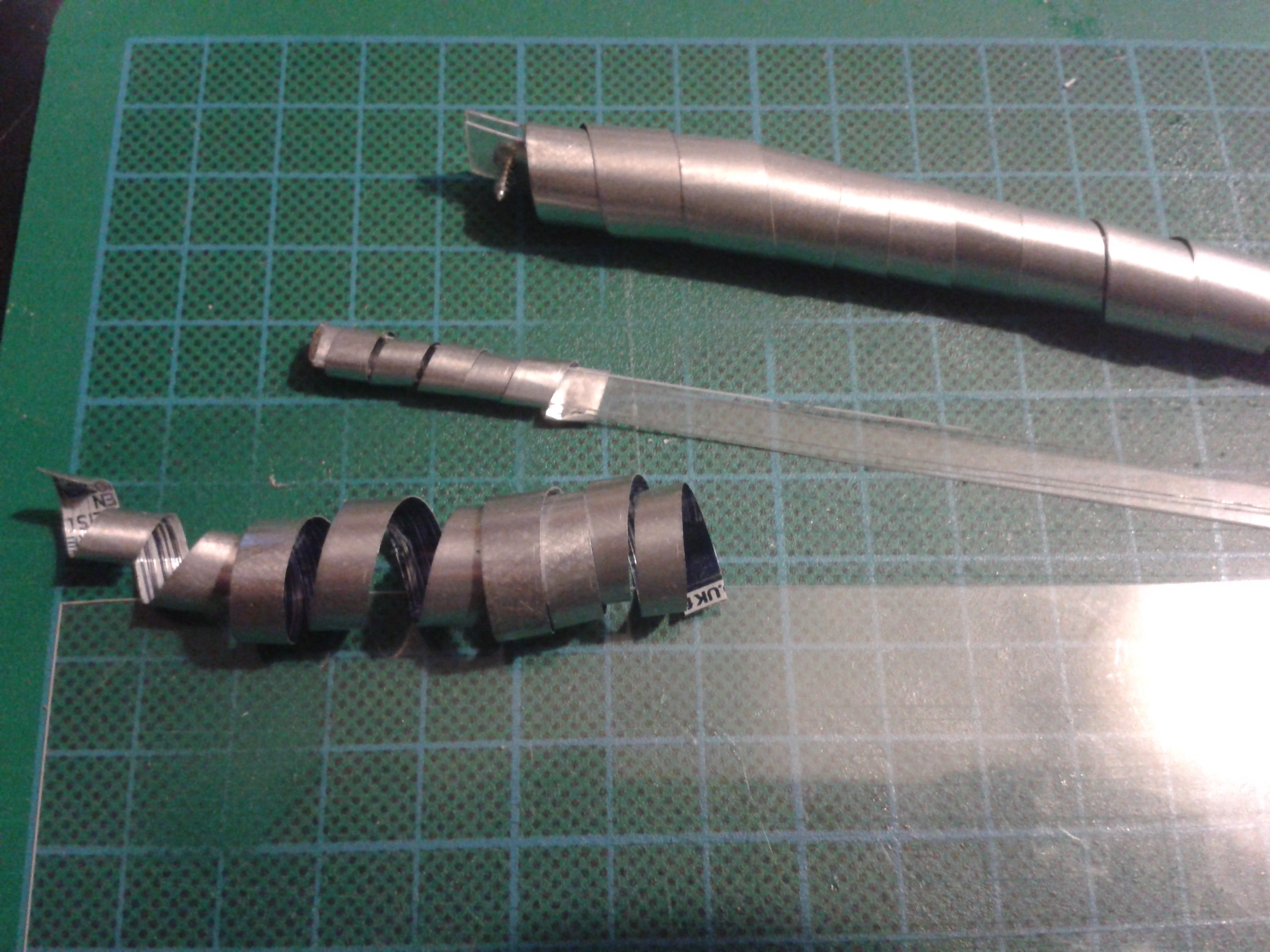 The mechanism is made from Polyethylene, it's transparent and doesnt show up so much through the gaps, plus it is a lot stiffer than the metal. This helps...

The ratio needed to make smooth helices turned out to be Pi, using a strip as wide as the diameter gives a decent curve that works regardless of scale. The fingers and thumbs also work, but not quite as well as the larger ones.

Bender can also draw his arms and legs into his body, something else that was probably inspired by John Wyndham's machine. I gave it a lot of thought and came up with an idea to implement that. If I'm careful I should be able to fit the mechanism into the body and leave room for the head to retract as well.

Ah, beer. So many choices, and it makes so little difference. 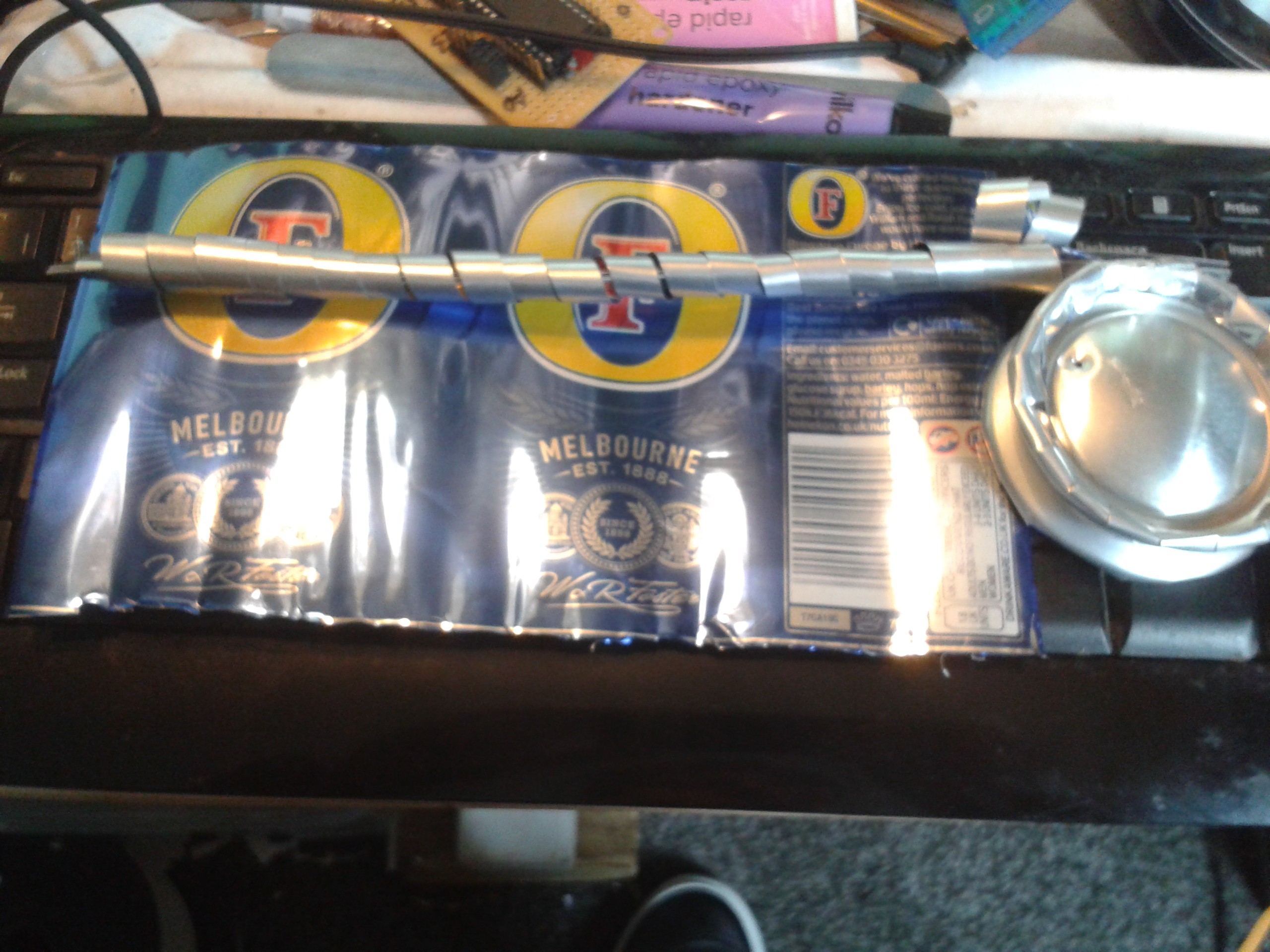 I cut the ends off the cans for the sheet and realised they were exactly the right diameter to make the Cheesing Mechanism. I folded the sharp edges out of the way and glued them face-to-face with contact adhesive. From experience Alu does not glue well with superglue, that was also a bloody nuisance. Note the small hole punched in one of the two can ends - this was needed after the contact adhesive sealed the enclosure and gassed it until it popped apart under the pressure. I'd forgotten how annoying spirit glues are working with enclosures. Cardboard bleeds and doesnt need special treatment.

All this needs now is a servo housing cut from the Alu and folded up, and a hub, and its a functional arm.

Stupid can opener! You killed my father, and now you've come back for me! 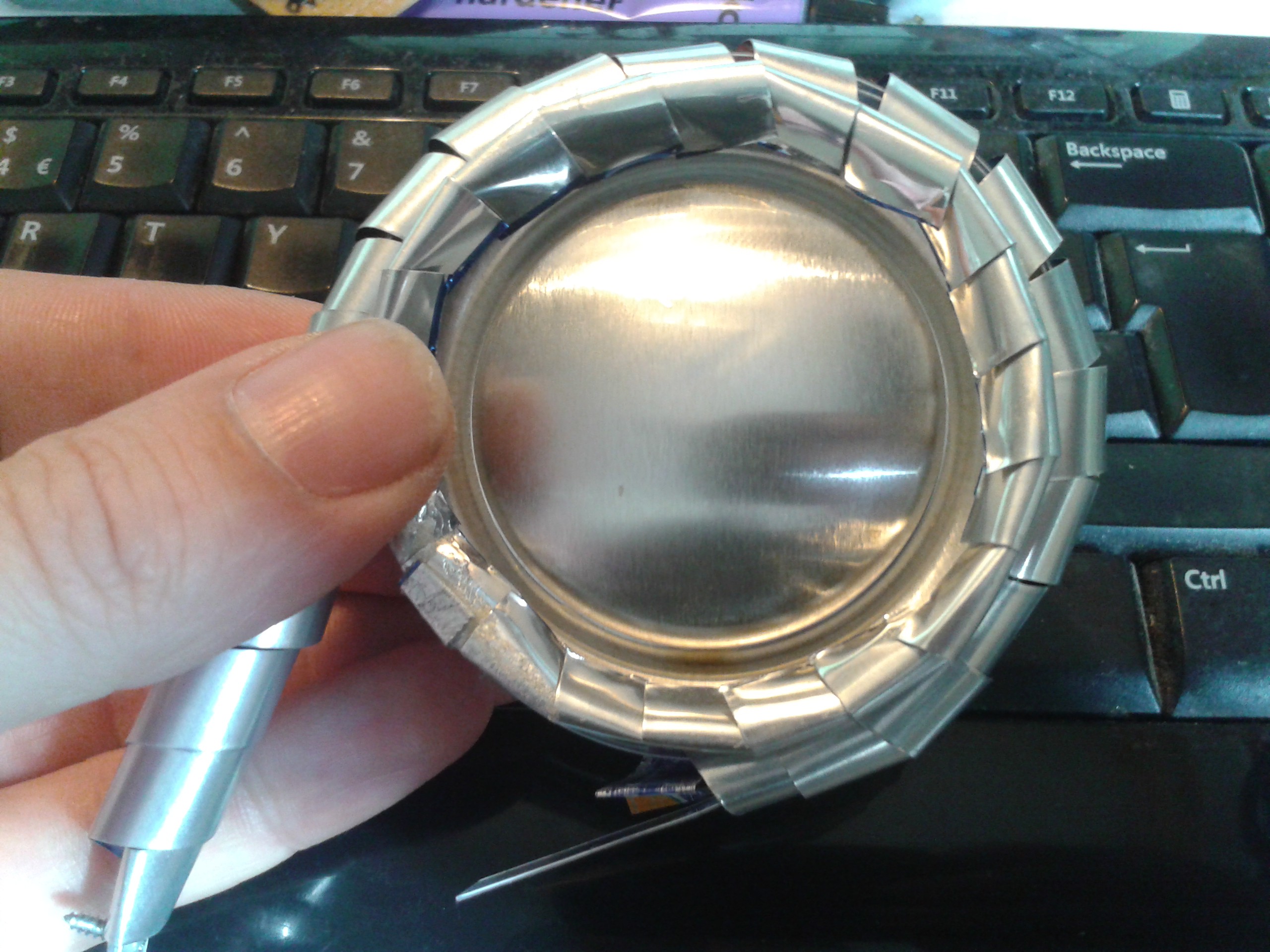 From now on, I can bend what I want, when I want, who I want. 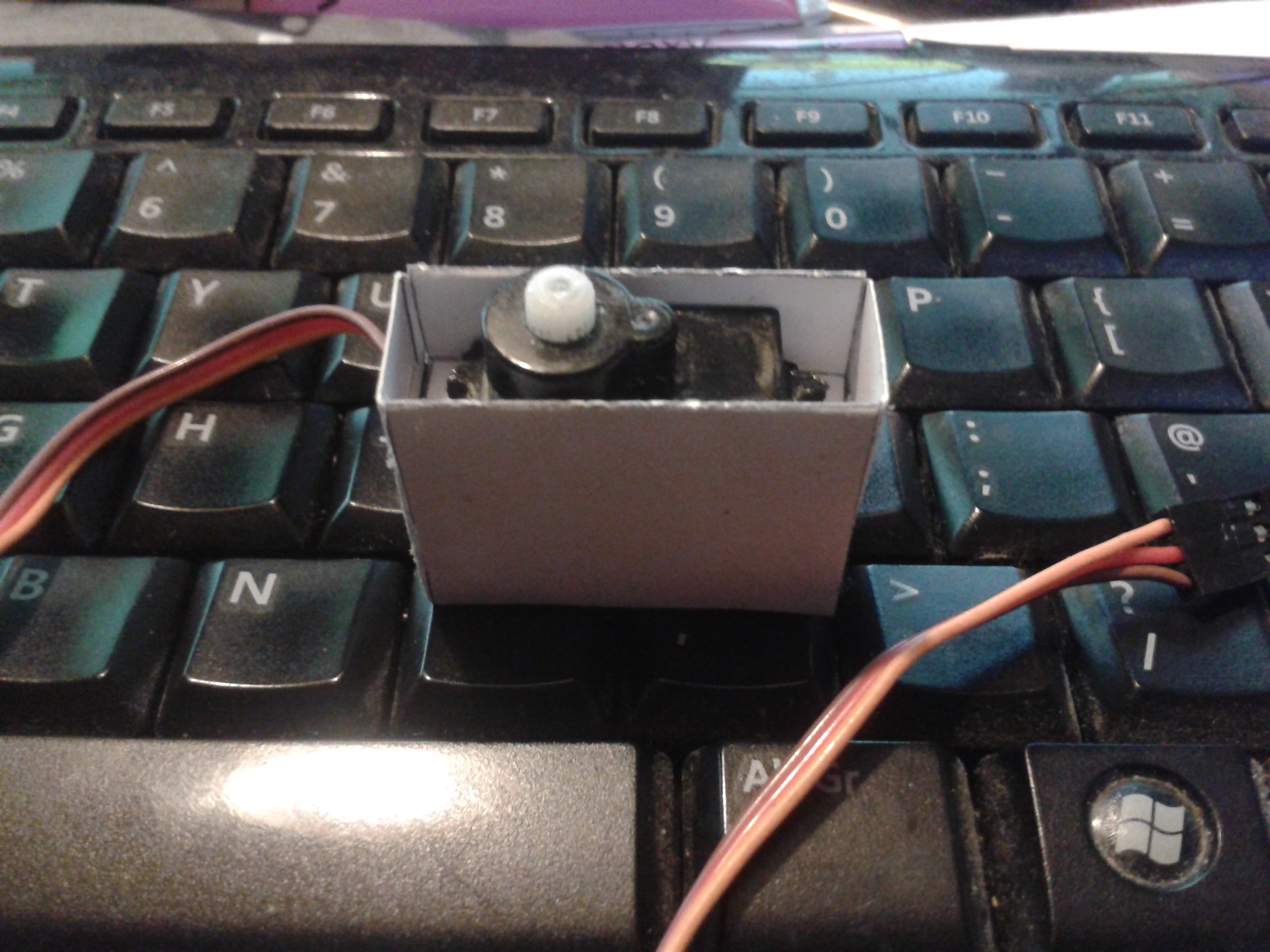 The Origaime ICU servo housing will do nicely, aluminium took to being scored and folded like a champ but then I expected it would. All sheet materials can be adapted with small changes in the way they...

Hey Eric :-) Cheers! Also for the skulls and follows dude...

this one will be made from a fabric shower curtain I got at the thrift store.
Project Owner Contributor

The 2017 Hackaday Prize
An educational system designed to bring AI and complex robotics into the home and school on a budget.
Project Owner Contributor