If we try to summarize what we have seen so far:

Thus, digital computers can perform all arithmetic and logic operations only using Boolean algebra values, operations and laws, which will be described below in details, using simple undergraduate maths.

It is thus a formalism for describing logical relations in the same way that ordinary algebra describes numeric relations.

Unlike elementary algebra which deals with an infinite set of numbers, Boolean algebra is using a finite set of only 2 elements. These 2 values can be indifferently called true and false, T and F, 0 and 1, or any other couple of symbols, but they are generally represented with the bits (binary digits) 0 and 1, as the XOR (exclusive-or) and AND (conjunction) operations (see below) plays the role of the addition (+) and multiplication (x) operations in integer arithmetic modulo 2, for which 1 + 1 = 0, but unlike common arithmetic, where 1 + 1 = 2. The OR operation (inclusive-or or disjunction) is then defined as x + y + xy.

Manipulating only 2 values is very nice, since it enables using the method of proof of perfect induction or proof by exhaustion, i.e., the verification for all possible cases for demonstrating theorems, as the number of cases is very small.

Boolean operations are functions having zero or more Boolean input values (in the set {0, 1}) to a single Boolean output value.

If we consider all possible calculations from 1 binary input value p to an output value, there are only 2 ^ 2 = 4 unary operations: 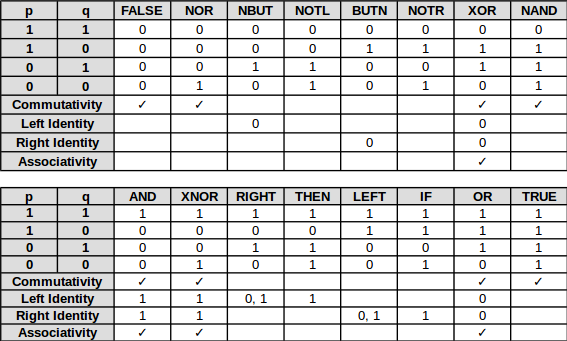 Here are enumerated all possible operations, and their equivalent representations:

The operations need not be all explicitly stated. A basis is any set from which the remaining operations can be obtained by composition. A Boolean algebra may be defined from any of several different bases. There are three bases for Boolean algebra that are in common use:

If we assume the lattice basis, the Boolean algebra satisfies a set of identities between two Boolean terms, where a Boolean term is defined as an expression built up from variables, the underlying set of constants 0 and 1 and using the 3 basic operations ( [AND, OR, NOT]) . These identities are called laws, which can conveniently be proven using the method of proof of perfect induction, given the small number of cases.

If we use the symbols commonly used for analyzing digital circuits (‧ or implicit for AND, + for OR and ~ for NOT), the following axioms hold:

All of the laws above use only AND and OR operations. These operations have the property that changing either argument either leaves the output unchanged or the output changes in the same way as the input. Equivalently, changing any variable from 0 to 1 never results in the output changing from 1 to 0. Operations with this property are said to be monotone.

Nonmonotonicity enters via complement operation NOT as follows:

The above axioms (Ia) to (Va) and their dual (Ib) to (Vb) are the ones introduced by Edward V. Huntington in his paper "Sets of Independent Postulates for the Algebra of Logic" pp 293-293 in 1904 as postulates bearing the same reference numbers in its first set of postulates (his postulates Ia, Ib and VI are provided by the lattice basis and the fact that the set of Boolean values contains 2 distinct elements, {0, 1}).

These axioms are sufficient to prove all the other laws below:

And one more nonmonotonous law was also described in Huntington's paper (lawn XIV is not):

However, whereas ordinary algebra satisfies the 2 laws:

These are the 2 last laws from Huntington's paper, and not surprisingly, form an indispensable tool when simplifying digital circuits involving AND, OR and NOT operations ("gates").

Some other laws can be proven (make sure to display the "Proven properties" panel):