In my continuing efforts to control my island's weather I have rebuilt my autonomous GPRS weather station with upgraded 'industry standard' factory calibrated wind sensors and made several significant improvements for better energy efficiency.

So why would anyone need such an elaborate weather station? .... Think 'Wind turbines', 'Farmers' and 'Gardeners'! ...... Anybody wanting to install an expensive wind turbine would need to assess the site feasibility before spending all that cash. Farmers and gardeners need to know the moisture content and temperature of their soil by monitoring rainfall and soil conditions. Crops such as carrots and early potatoes are particularly sensitive to soil temperature for initial seed germination. Plant your potatoes too early in cold soil and the whole crop becomes overwhelmed by weeds.

Check out the live online webpage, as shown below, here: CLICKY LINKY 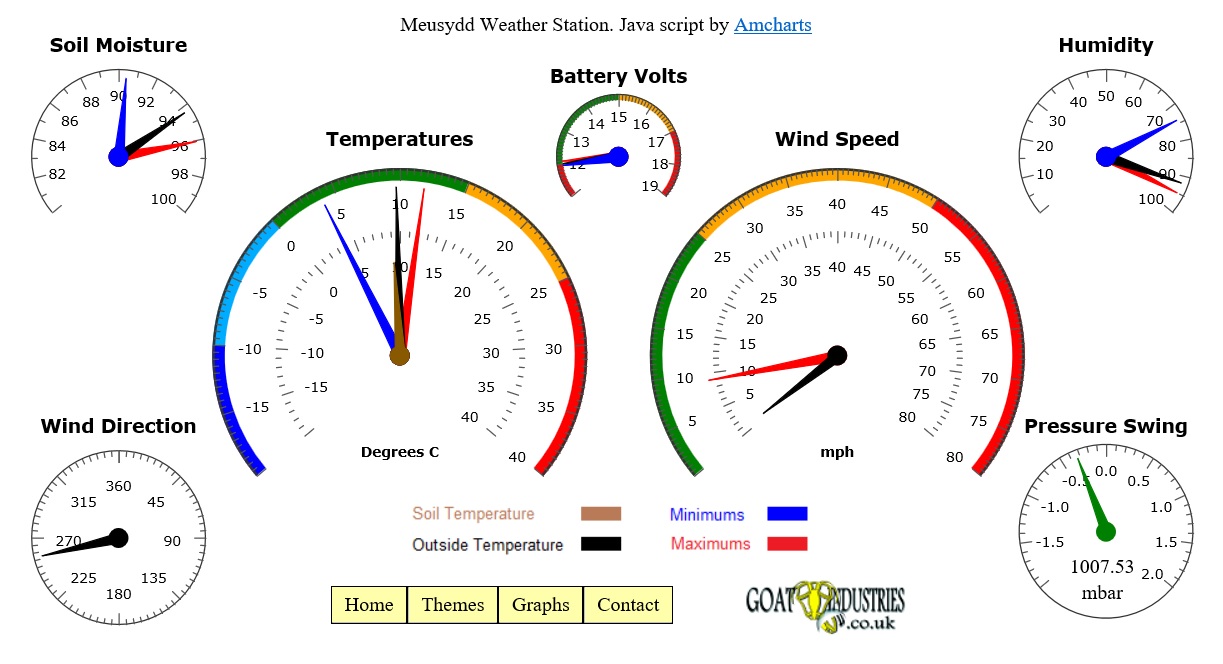 Of the three Arduinos in this design, one just operates the TFT screen and can be removed after all debugging has been done. The small, second, 'Master' Nano takes readings of wind speed via the Arduino 'pulse in' command and rainfall is monitored on an 'interrupt' so that not a single drop of rain is ever missed. The other interrupt on the master monitors a call back from the Arduino Mega slave, which tells it when data has successfully been transmitted to the Interweb. On successful transmission, the values for wind speed, wind direction, volts and rainfall are reset to zero. If transmission fails for any reason, wind speed and rain are kept in the memory for the next transmission attempt so no important data is ever lost. The third Arduino, a Mega 2560, controls the FONA GPRS module and other sensors such as humidity, pressure and temperatures.

High accuracy and energy efficiency is achieved by using industry standard wind sensors which are individually calibrated at the factory.

Since this is quite a big project - it took me 18 months to put together - some of the background research and calculations are to be found in the 'Project Logs' section to try and keep the instructions section a bit easier to follow.

If there was enough interest I would create a purpose made PCB for the project, rather than using the general purpose 'Hackable' prototyping board that I used here, which would make it much easier for people to re-create this project.

My son recently returned from a holiday in China. His biggest complaint was the blocking of FaceBook!
Project Owner Contributor

An Old Fashion Acoustic Modem for the iPhone