Trying to design furniture means dealing with the fact that anything with more than three contact points on the ground would need some means of adjusting those points otherwise the whole thing will not be able to sit properly on an uneven surface. Since this project is aiming for simplicity, designing for the minimalist three contact points seems better than adding adjustable feet.

There was the concern that three legged design would run into problems on the CNC cutter, as it might run into situations where surfaces will need to meet at 60 or 120 degrees instead of the 90 degree edge cut by the router bit. While this might be solvable with a custom router bit, the ambition is to use clever design to work around the need for such joints.

And on top of all the practical concerns, there's also the desire to add a little bit of pizazz, something unique to this project instead of just Yet Another Work Stool. After some brainstorming of interesting three-sided shapes, the winner is the distinctive triangular shape found in a Wankel rotary engine, made world famous by the Mazda RX-series.

The seat at the top is shaped like the Wankel rotor, including the cutouts made in the real rotor for the infamous apex seals. The circular mid deck echoes the central cavity for the eccentric shaft at the middle of a Wankel engine. Three legs sprout from the middle of each of the three sides. 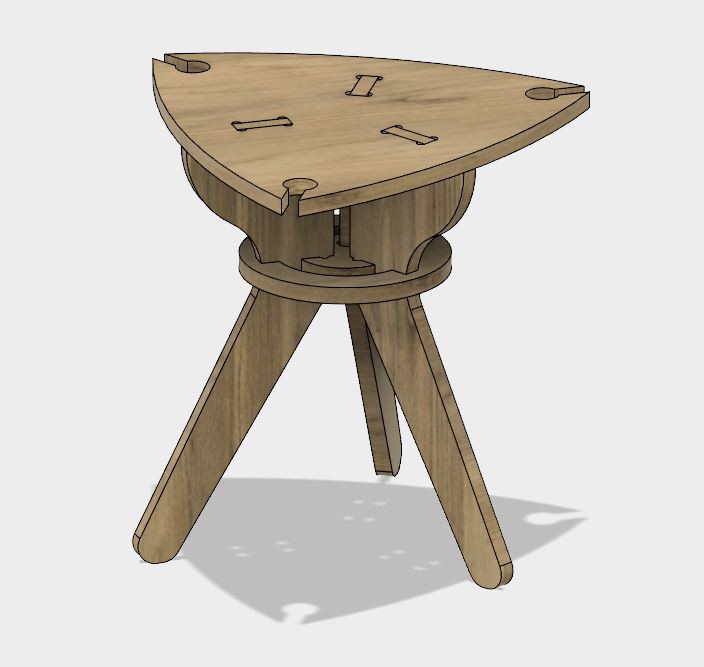 The pieces laid out for cutting

Before we jump directly into full-scale CNC routing, though, we should make some scale models to test out the idea in the physical world. We could use a 3D printer, our tried-and-true old friend, but the nature of CNC routers on plywood is very similar to that of a laser cutter.