This project was born after some students of mine needed some surface mount headers. i had an old eagle library i had made by hand. the students found no end of problems with it. first the pins were mixed up. a bit of grunt work later, that was solved, they ordered boards and low and behold: the parts were to big for the pads. and that was the last straw. 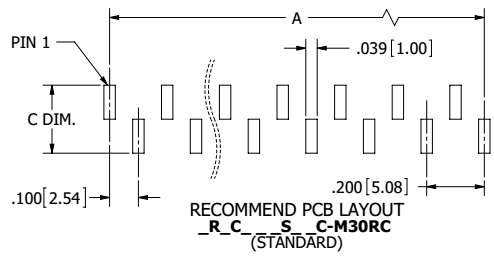 This project doesn't really need many logs, the entire process took only a few hours from start to finish. But the process may be of use to others. the problem stems from the figure above. it lists the dimension C without a number associated. you can find that measurement in a table based on what family/type of component you purchase, hence all the blank spots in the part number ending with M30RC.

To complicate this situation, these headers come in sizes from two pins to 40, and four or five varieties plus each variety has a mirror image, That sounds like 300-400 different footprints.

So how do i script eagle? ULPs are not a good fit for me for 2 reasons:

So a quick look at SCR files shows that there are no looping or math functions available, it seems that ULPs usually return a SCR script to modify things in the sch/brd/lib file; but as per reason 2 above, i don't want to learn ULPs. so python will be used instead.

the rest of the project is making custom EAGLE commands with the correct arguments.

Hackaday Prize 2020
I have made this "YouTube Desktop Notifier" to keep me up-to-date with my channels Subscriber and View Counts.
Project Owner Contributor

A 3 minute guide, as well as a "from scratch" guide
Project Owner Contributor

Fritzing: creating your own part