In this tutorial we will learn how to program the robot to run in a single direction continuously. 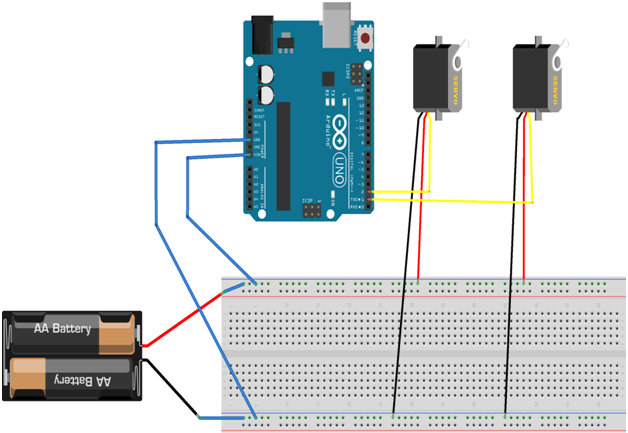 Using this tool you can directly implement your algorithms by just dragging and dropping the required blocks onto the screen and connecting them appropriately. Go to your desktop and open the Arduino IDE, the following window will appear 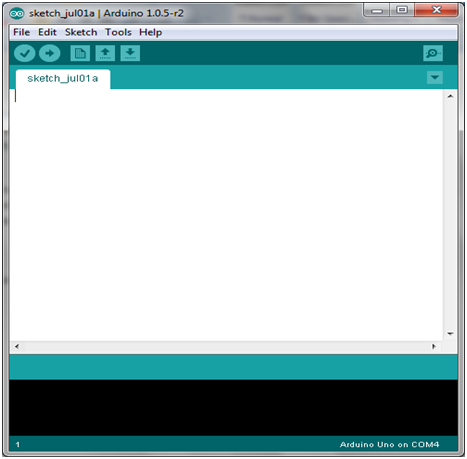 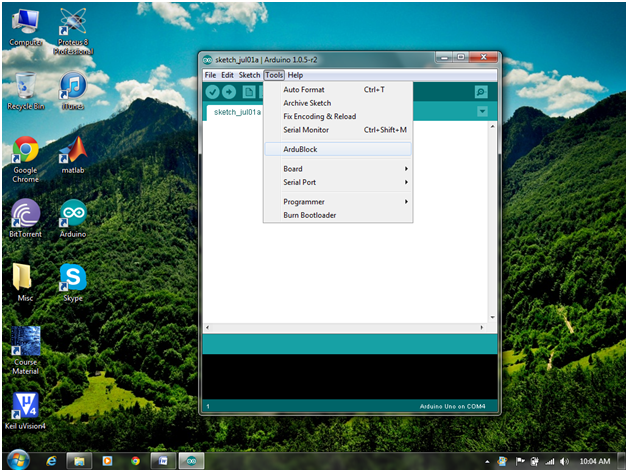 This will open the ArduBlock software.

After clicking, the following window will appear 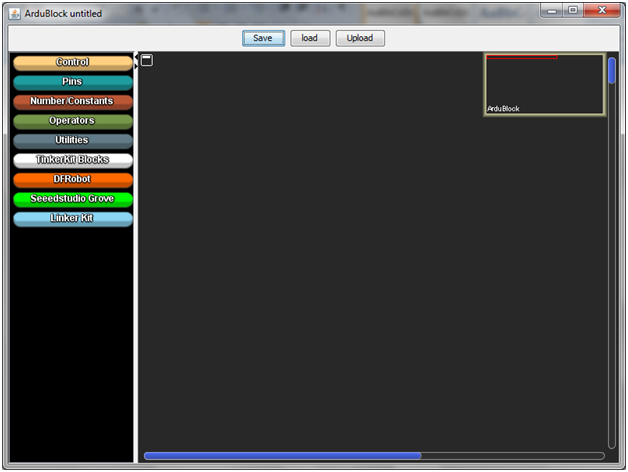 As you can see on the left there are many tabs like the Control, Pins, and Number Constants etc. which we will be using in order to program our robot.

In this step we will learn how to use ArduBlock to program our robot.

First we will make a program for the robot to move in a straight direction but first we should see how the servo motor which drives the wheels of the robot operates.

Now let’s see how we can do this in ArduBlock. Follow the given steps:

1. First click on the ‘Pins’ tab on the left of your screen the following options will appear 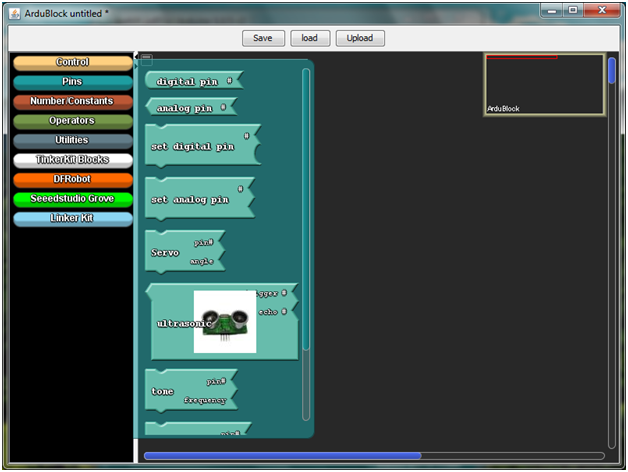 2. Now drag the servo block from the ‘Pins’ tab and place it on the programming window as shown below: 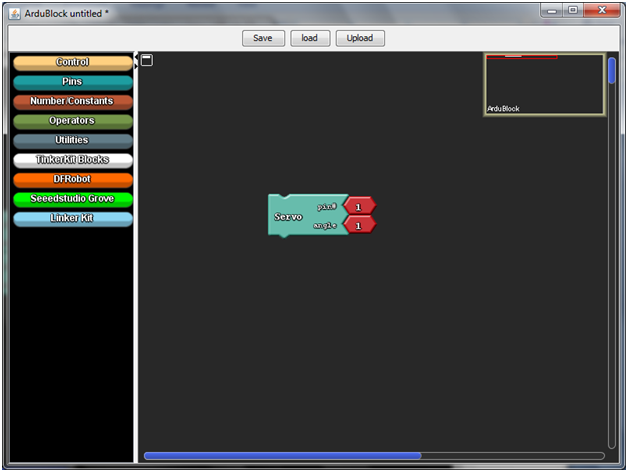 As you can see the servo block has two numeric inputs, one is the number of the pin on which the servo’s signal wire (yellow wire) is attached. Now repeat this step again so that both the servos have been added. Connect the second block below the first one as shown in the image in step 3.

Make sure that the pin number given to the block for both servos is the same as the number of the digital pins of the Arduino to which the motors are connected. In this case let’s assume that they are connected to pins 1 and 2 respectively. 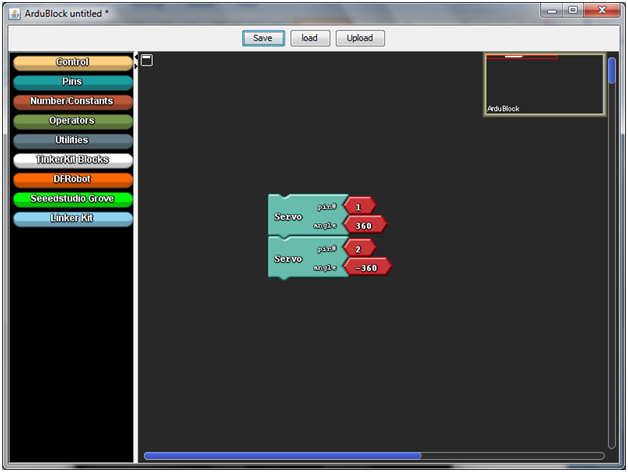 4. Go to the controls tab the following options will appear 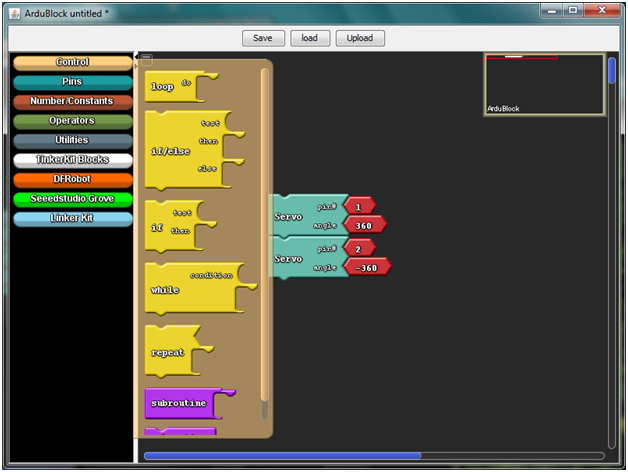 5.Now drag and drop the ‘loop’ block onto the screen and connect it to the top of the first servo block. The loop block will automatically extend and cover both the blocks like shown below: 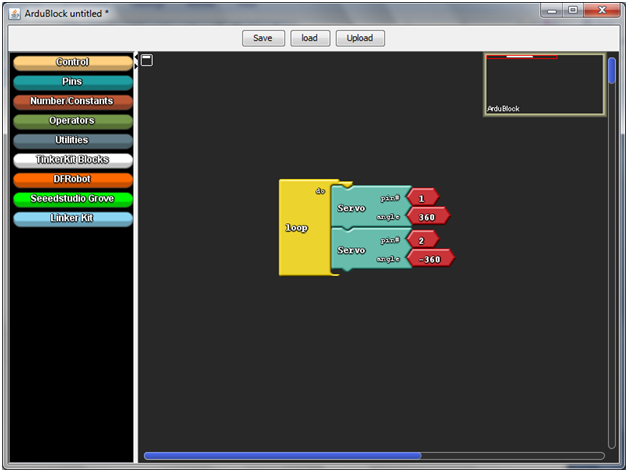 Now our programming portion is complete. Save your program.

Connect the Arduino on the robot to the USB port of your computers via the USB cables but first remove the Vin wire connected to the battery before connecting to the computer. Once connected then click on the upload button. It will take a few seconds for your program to be uploaded onto the Arduino.

After the uploading is complete remove the Arduino from the computer and reconnect the Vin to the battery. Now you robot will keep on moving in a straight line indefinitely until its battery gets drained!

Note: If the right and left servo motor connections are interchanged the robot may start to spin on the spot to correct this problem if it arises correct the connections or change the angles in your program and give opposite angles to both the servos than the previous ones.