For the last 6 months I have been working hard on a brand new, revolutionary Visuino design!

The goal was to make Visuino generate better optimized code than even very experienced developer can do after spending weeks of manual optimizations!

For this I had to invent a number of new advanced coding techniques. They are difficult to use when manually writing code, but are perfectly suitable for automatic code generation :-)

The work took long months of writing and rewriting, experimenting different approaches, testing results, and at the end completely rewriting (few times :-( ) all Visuino libraries from scratch, as well as practically all of the code generation algorithms.

As result for moths I was not able to make new posts, videos, tutorials, articles, answer many of my e-mails or social media contacts :-( . I was completely obsessed with the goal of completing this gigantic, and complex task...

The results however were astonishing! In some cases the generated code used more than 90% less RAM! The code size also shrank considerably and executes few times faster! 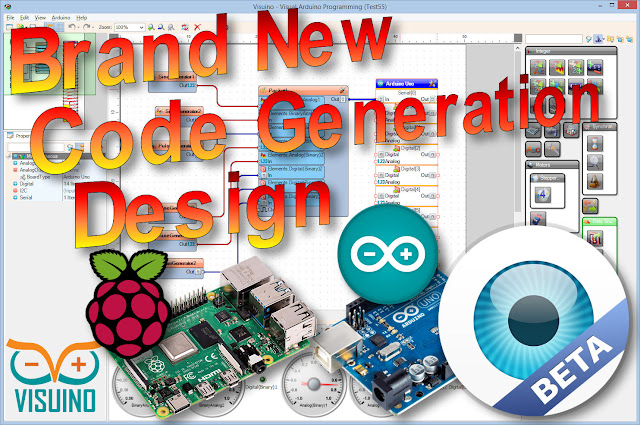 But I did not stop here. I also significantly enhanced the Visuino graphics, adding many new features, including graphics elements specifically designed to allow you to easily display gauges and clocks. I also added support for Adafruit type proportional fonts.

Now the real surprize! In this version I also added experimental support for Raspberry Pi!

Yes from now on Visuino will support not only Arduino and other microcontrollers, but also Raspberry Pi!

Here is a screenshot of the new Raspberry Pi board mapping: 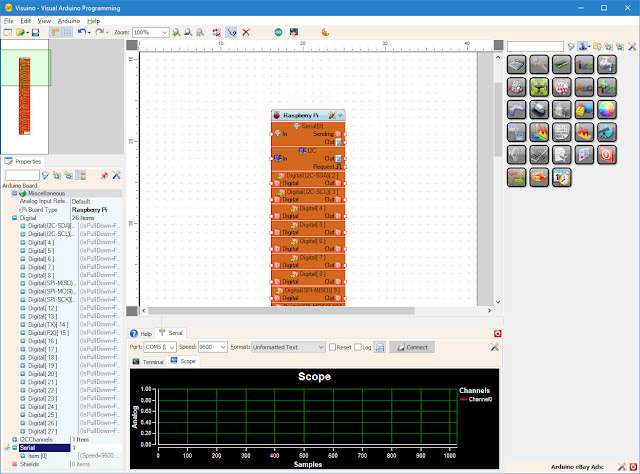 In addition to all this, quite some work went into making the IDE more stable, and easier to use.
The Visuino will continue to be in Beta for another 2 weeks or so and as soon as we all are happy with its quality, I will release the new version officially :-)