A Wearable, IoT+ANN Dev Board for Body Sensing

This project page is being continued on another page, which makes this page defunct, as I've started a new one for it to enter the hackaday prize. You can like and follow it here: https://hackaday.io/project/110479-bodihub

This is my very first development board project. After shrinking about 15k worth of equipment to a custom board the size of a credit card that can read your muscle signals, to winning TechCrunch Disrupt's 2015 Hackathon with an IoT device that tells my Dad if his stove is still on, you'd think this kind of stuff is old hat for me.

I've made various circuit boards in the past, but they've all been bread boarded & hand soldered. When I made my SEMG wearable pod, while I created the circuit design, support electronics, and software, I had my buddy take care of the PCB lay out and soldering.

I used to roll my own hand soldered, slag jumpered bread boards as components. Like these. 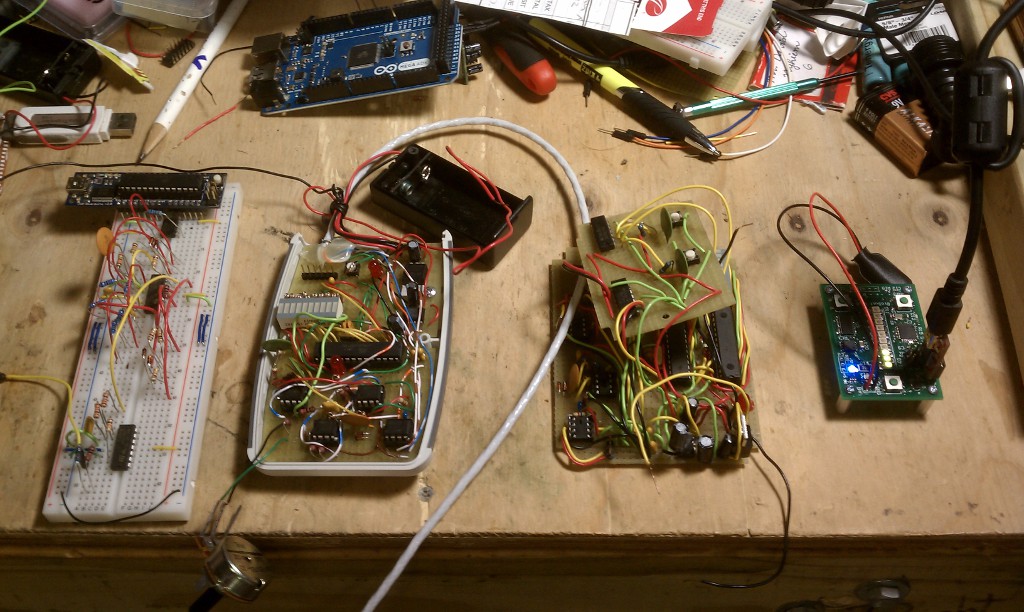 It looks janky as hell, right? But guess what ! It still worked. This is my usual progression when it comes designing and manufacturing circuits. This method has lots of issues like accidental shorts, which is why every time I look at someone's project, and see these gorgeous, well laid out, manufactured, smd soldered component boards, I get a little envious.

So why a development board? A lot of what I do involves body sensing, and with IoT in the mix, that makes for some interesting requirements.The interesting thing is when you do a search for wearable development boards, literally two things come up, and then my hackaday blog about making one. And to top it off, the two that come up are A.) Yet another watch, and B.) A board you can stick in a watch, and doesn't have the requirements that I want (wifi/bluetooth/lots of analog ports). So it makes sense for me to roll one out.

But I don't want to make yet another generic arduino esque board in the millieu. This one will be wearable, mesh capable, and talks to the cloud. And it has an educational purpose, and serves as the foundation for other projects, like helping my researcher friend studying Rett syndrome, a rare, neurological degenerative disorder.

So the first thing I do whenever I start a new project, is I figure out what it needs to do first. These are my requirements.

Just a random thought but have you given thought about using multiplexing the analog port? Maybe it is possible to use a few sensors that are modulated and mixed into one signal. You could allow for switching to focus on one sensor at a time through additional hardware or tuning through software to filter each sensor's individual signal. Just a thought around that issue of only having one analog port. It might add bulk, but I'm sure you're skilled enough to make it work.

I have thought about multiplexing the analog port on the dev board, and actually, I'm open to making two prototypes, one using that concept, and the other using an add on Analog device. Thing is though, I do like higher ADC resolutions, being experienced in body sensing. Given how cheap it is these days to make your own prototypes, it's not that much extra for me to give that a go.

I can see why you would favor resolution over multiplexing. In the end, it might require an amplifier and oversampling just to keep up resolution. Not sure how that would play out (not knowledgeable with this particular micro to say for certain). However, with a bit of tweking, I'm sure that is a limitation that can be easily overcome. What add-on analog device are you thinking of using?

Right now, it's a toss up. Everything boils down to cost/benefit ratio's. The 10 bit ADC's are generally cheaper, , and you get a lot more ADC ports, but you're also at 10 bit. And you're right, amping the signal a bit for more bandwith for better sampling comes into play. For Rhett syndrome kids, currently what they're measuring is lung volume, using chest/thorax capacity measurements. That means a measurable band across a large cross sectional area. The problem is not a lot of sensors today are particularly accurate for measuring cross sectional area changes, and a lot of that is also noise (kids shuffling around, getting itchy, moving the shirt, etc.) So while on one hand I'd love more sampling resolution, I also have to deal with things like kid's movements causing noise spikes, or general imperfections of the sensor inaccuracy.

But it all boils down to money, so less money for more bang for the buck is what I defer too. Right now I'm looking at the MCP3004 because it's relatively cheap, and has 4 ADC ports, and it's SPI.

The 2018 Hackaday Prize
Small, Ergonomic, Portable and better than any other travel mouse
Project Owner Contributor

The 2016 Hackaday Prize
Applying polymorphism to hardware enables users to do more with their devices while avoiding IoT pitfalls.
Project Owner Contributor

Hello, my name is: a wearable name badge

The ides of DEFCON: An Unofficial Electronic Badge