And Arduino Library
- a lib for SFP/DDM interfacing (not only optical sfp transceiver
- to interface and interpret DDM (Digital Diagnostics Monitoring ) protocol (which used in most optical fiber communication) scheme and format
- to debug, monitor, detect alarm and control SFP via DDM
- to extend the capability of handling data TX/RX interface (Arduino data over optical fiber)

- Although transceivers are different, all SFP modules are controllable with a standard protocol named DDM (Digital Diagnostics Monitoring).

- DDM is The operating and diagnostic information is monitored and reported by a microcontroller inside the transceiver, which is accessed via a 2-wire serial bus (also known as "I2C" or "I2C" protocol).

- So, initial idea is to build an Optical Power Meter from scratch by using Arduino and Optical SFP modules + LCD + keypad

- Other type of SFP modules such as Ethernet Electrical, STM, SONET and ATM are easily exchangeable to diagnoses different types of communication interfacing system

- Optical to Arduino direct interfacing is possible via optical SFP modules. Speed Limitation may depend on Arduino processing and peripheral throughput. The ability of simple Arduino to Optical interfacing will be advantages in some cable network and noisy environment like factory automation. 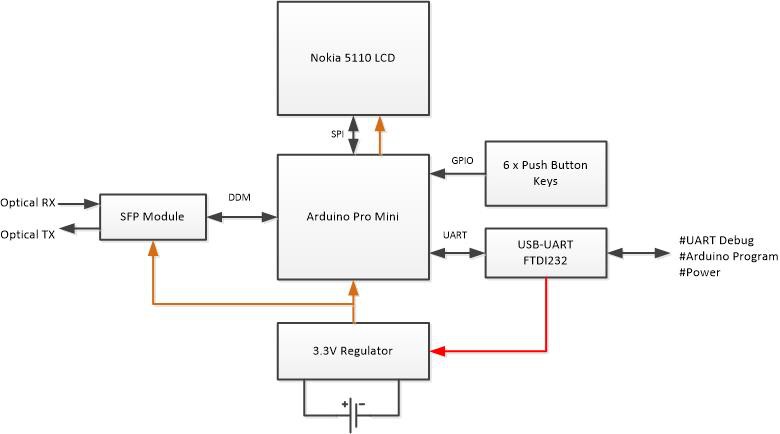 good day, mr oakkar7! I want to clarify, I'm going to do this with a socket for the SFP module. the question is, do all sfp modules have the same ddm register?

I want to ask you about your project with SFP. Currently, I build the same project like you but I still have some difficulties. In my setup is not having button, but I just copy all the code from your project on your GitHub. In my purpose project is just to read the measurement continously from SFP which are the power transmitter (TX) and the receiver power (RX). When I run it, I get TX and RX always inf even I use fiber optic patch cord with bending. Could you help me to solve my problem? Thank you

What is the need in the circuit resistor R7?

Cool project! And thanks for inspiration for my project #Fiber optic Power/Link tester

I have little experience with this technology.  I am interested in sending up to 100kHz signals for driving a high power supply (to interface with a MOSFET or IGBT gate driver circuit).  Is it possible to use the 10Mbps channel on this device to transmit this lower bandwidth signal?

I did this a couple years ago, I think we could both help each other a lot!

For instance, would you be interested in a PCB for an SFP cage socket I designed? It breaks the socket out to a pin header. No soldering directly to the SFP for me! I can insert and remove optics at wil..

I used a tiny OLED screen and built wireless charging into mine. Also, I did 2 way comms over the fibre link so the remote end tester (it's a pair) can send the remote RX back, so both ends see the RX power from the other end as well as their own.

Find google "TTL to ECL" and you will see several chip. I never tested it but it should be work theoretically.

One consideration, this Fiber SFP are designed to drive 10/100/1000 Mbps bit rate. So, the minimum speed for module is 10mbps. Normal 8bits Arduino/UNO/Mini/Mega digital pin bits rate is about 2 mbps. So, you should select MCU with more data driven capability like 32bits platform, DUE, Tensy, MKR etc..

could you recommend me about make a connection between two modules sfp with 2 arduinos, and with which I make the communication. what should i do about code.can i use ddm lib for do that ?

Hi, I would like to know if you could make a connection between two modules sfp with 2 arduinos, and with which I make the communication

to send/receive data over sfp/fiber, you will need TTL/CMOS to ECL translator chip.

In theory, but the issue is you can't do slow communications as these are designed for 100meg or gig comms and the modules just don't like low speed data. I couldn't get it to work at serial speeds. I did cheat with a hacky bodge method and finally do have serial comms, but nobody will like how I did it :)

Yes. I made this a couple years ago and did just that. I send serial data over the fibre link. It's a hacky messy bodge, but it works.

A hacky bodge method ??, how  did you do that?  Yes, like you said, the interface may not work well in low bits rate. 100MHz and a several kbs are a quite difference.

Use Konekt's M2M Platform to Connect an Arduino to Cellular!
Project Owner Contributor

Connecting Arduino to Cellular via Konekt

An irrigation system using the U1 board from InvIoT.com. You also need a 4 relay module and 24v power supply
Project Owner Contributor