An amusing network of items around the room that carries on a continuous conversation simply for the sake of socializing. They develop personalities and opinions about other objects based on their environment and communication with others.
It's a big step beyond a virtual pet. It's a virtual social network. Actually, you could say it's a social network of virtual pets... But this is getting strange.
Although there could be some academic application, this is purely for entertainment. Plus, since it is basically a sensor network I can record the light and temperature profile of my room.

If the picture frames, lamps, clocks and other things around your room could converse with each other, what do you think would happen? They might form opinions about other items in the room. They might form social groups. There may be bullying or romance or arbitrary hierarchies.

The goal of this project is to create a social network of household objects for entertainment, social model experiments, or just to give the room a little more personality. And of course, all designs and code will be open-source so you can make your room cool too.

The system consists of several nodes attached to various stationary objects in my house. They are able to communicate with each other via IR and they observe their environment through temperature and light intensity sensors. There is an ongoing conversation between nodes that affects parameters corresponding to human feelings such as trust, affection and perceived social status. They also have personal parameters such as confidence, honesty and desire to socialize. Before you start laughing, I admit these words don't have any meaning to a microcontroller. The parameters simply influence the way they communicate with others and thus how the society develops.

A lot more information such as design concept, components list, current progress, plans and goals, links to code and resources, and license information can be found in the system design document(github, pdf).

Here is a rough outline. 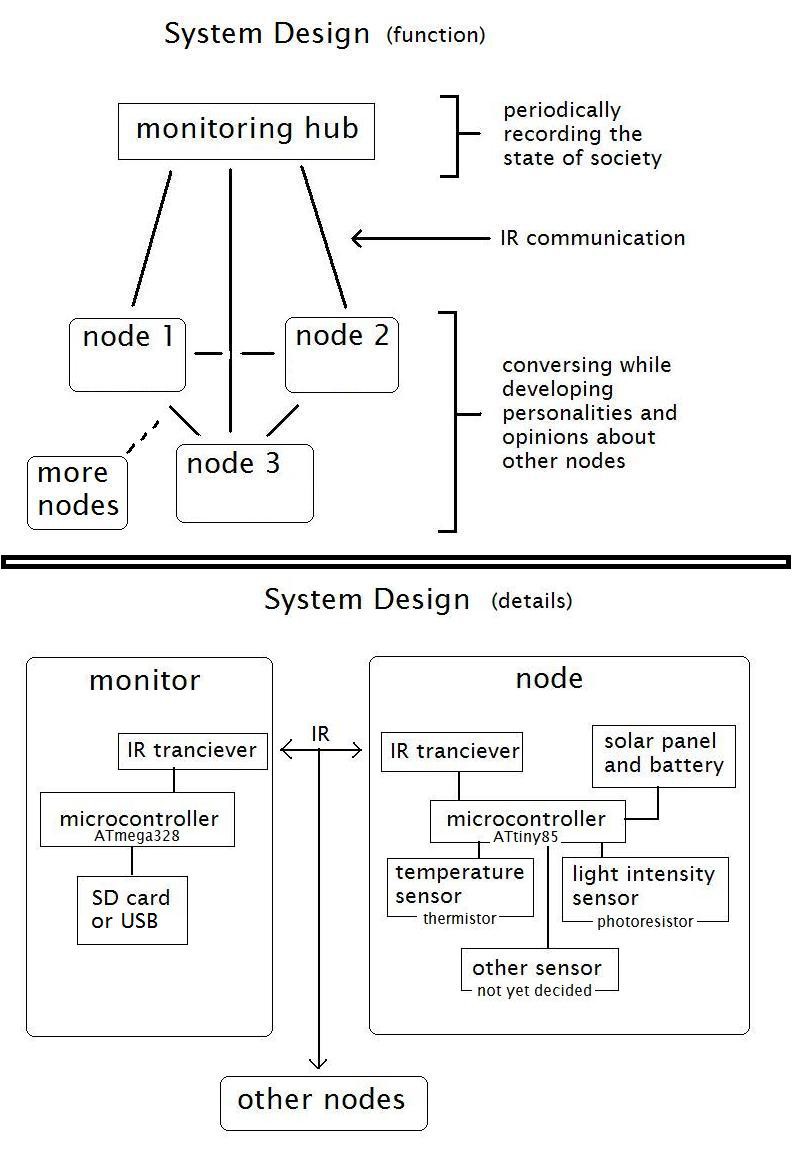 This is not be a deterministic system where the outcome is based only on the algorithm. The environmental input plays a significant role in molding their personalities and the messages they send to others. Stochasticity is also generated in the software since every interaction has several possibilities whose probabilities of being chosen are influenced by various factors. See the project logs for much more detailed descriptions.

There is also a monitoring hub which periodically logs all of the current parameters. This data will paint a picture of the developing society of things. There are currently two types of hub. One connects to a computer via usb for debugging and viewing real time data. The other records data to an SD card and doesn't require a computer. Both types are also capable of acting as nodes and take part in the conversation. The details and schematics for the monitoring hub are currently being made, but a temporary test setup based on an arduino and breadboard is in use.

This is looking very interesting idea I am also working on a similar type of golden retriever puppies website you can see here.

I know this project is long since dead and not going anywhere any time soon, but I just wanted to say that I've been so inspired by this concept for so many years since I found this page online, I come back to it every couple of months and think about how I could apply some of these concepts into my own projects. Thanks for making this!

Avoid the confusion by adding actual data and interactions to a log they all tell the truth to...  Call it 'Doc' if you like, the psychoanalyst of the group. He can help you make sense of the chatter.

shlonkin wrote 08/12/2014 at 01:07 • point
Yeah, and then I'd probably go loony combing through the code to figure out what went wrong.
But seriously, you are giving me some good ideas. It would be great if the nodes could take over the functions of the devices they are attached to. If this project makes it into the quarterfinals I will make a determined effort to make that a reality.

shlonkin wrote 08/11/2014 at 23:38 • point
Sorry, I know you wrote this a couple of weeks ago.
That's a good quote, but the ideal outcome of this project is if the devices begin acting in ways that I did not intentionally program them to. If my clock develops a sense of humor I will shout for joy.