Solar Charging Circuitry for the Nodes

Each node in the mesh network is design to run independent  of AC power. Each node has a solar panel that powers a charging circuit that feeds into an array of 6 volt batteries.  The problems with solar power is that there will be times when not enough sun hits the panel to supply the current required to power the node. and at night the system needs to run fully off the batteries. The AMP-HOUR capacity of the batteries therefore need to be calculated for a worst case scenario so the system is never shut down due to a lack of power.

In addition to that the charging circuit needs to designed so the that batteries are not overcharged, Overcharging the batteries can damage them and result in a dramatic reduction in the functional life of the batteries  The follow schematic applies to lead acid or NiCd batteries. As one of the objectives of this project is to ensure the parts can be sourced in developing countries the charging circuit is designed with discrete components are opposed to using a pre-packaged power module. All the components in this charging circuit have been around for decades  and there are many equivalent parts from many manufacturers that can be substituted. 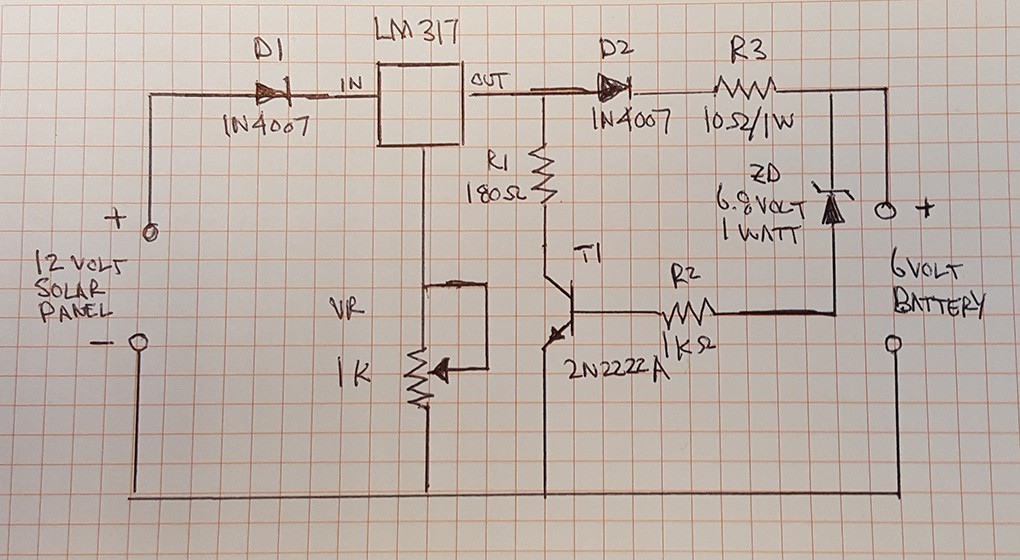 This circuit is a modified version of the circuit on this website:

Nominally approximately 12 volts is produced by most large solar panels. The current from the solar panel passes  through the diode D1 to the voltage regulator, LM317.  The output of the voltage regulator is tuned by the variable resistor (potentiometer) VR to set the proper charging voltage for the battery. D1 prevents the solar cell from drawing power from the battery circuit when it is not actively producing current such as at night or on a very cloudy day. When the voltage on the battery reaches greater than 6.8 volts  (fully charged battery), the zener diode (zd) break down and turns on the NPN transistor T1 which will then shunt the current to ground through the resistor R1. The goal is to make sure the battery does not get overcharged. Overcharging the battery dramatically reduces the life of the battery as the elevated temperature due to excess current affects the chemicals in the battery.

The web link above also provides a circuit board which can be used in the design. To save the cost of doing a minimum production run of the boards, a prototype board with soldered connections between components can also be used to implement the circuit. This was the method of fabrication for circuits before the existence of circuit boards. This gives the community implementing the system a more cost effective approach if they only need to add  one more node to their network.  The other parts of a node do not require that they be manufactured as the other components of a node are off the shelf modules that are connected though off the shelf cables, Our goal was to create a system that could be essentially plugged together as opposed to assembled through a complex process.