The Central Principles of the HCORT Design are as follows:

2. Must include latched platooning on the main HCORT freeways (expressways). When vehicles platoon, the vehicles approach each other while traveling at or near the full speed of the freeway and gently touch on large bumpers and latch together. i.e. clamp, clasp, attach or otherwise fasten together. The electronically controlled latch can be controlled by either vehicle. Reasons for adding this latch are as follows:

3. Vehicles must be based on four wheels with rubber tyres. These will probably be pneumatic although there are other alternatives. Reasons for rubber tyres are:

4. Initially, projects creating or designing HCORT systems should not design or create any vehicles in total for the system. Rather, the design or creation should be that of kits that allow modification of standard electric cars.

Note: Once a major implementation occurs there will be a substantial number of vehicles purchased. With this purchasing power, there will be a large number of further modifications implemented such as taking away the steering wheel and other controls etc, adding an emergency exit, particularly to the front of the vehicle etc.

5. Solid bumper bars with latching will be developed as part of the kit used to convert electric cars to HCORT vehicles. These are currently envisaged as being like 1980s style Volvo bumper bars. The bumper bars will include shock absorbers (i.e. damping which insures that there is little spring rebound). Many of the various sensors will be incorporated in the bumper bars. Use of these bumper bars is expected to aid in independent modular component design as it allows a design which includes mechanical aspects to be created as one larger module incorporating a number of the smaller modules used to make the vehicle design. It could be designed with lightweight Fibre-reinforced plastic (FRP). These bumper bars must produce a standard height above ground level where vehicles will meet each in any push and shove and where sensors or reflectors etc are mounted.

6. The guideway system should primarily be treated as an alternative to adding extra road throughput such as an alternative to adding a freeway (expressway) rather than as a way of adding an extra public transport network like a railway. Its costing should primarily be compared to that of adding extra capacity to the current road network with the public transport vehicles being considered in a similar manner to that of buses over the top of roads. Implementation of guideways should be done by the authorities creating new road transport. Reasons for this include the following:

7. The system should utilise the previous roads as a 'near grade' system through out most of the outer suburbs. This is particularly so for the branches to sidings that contain the substations as these are best placed on back streets substantially reducing implementation costs. The HCORT freeways in most outer suburbs will run down the centre of what was previously minor arterial or distributor roads. When these roads intersect with standard roads the HCORT lanes will sink into the ground, like an open ditch, with a bridge over the HCORT lane for the standard road traffic. Note that this is only 'most' of the time. It is expected that there will be some streets where the use of any part of the street will cause excessive disruption to the road traffic or for various other reasons will not be possible. In these other cases the new network can be implemented as elevated guideways.

8. All vehicles must be severely height limited.

10. The system uses multiple types of guideway. These guideways are as follows:

11. The use of near grade for sidings and side lanes requires a large number of near grade crossings. With most of these the HCORT lanes will sink into the ground, like an open ditch, with a bridge over the HCORT lane for standard road traffic. The number and placement of these will depend on the street pattern but one of the most common places they will be needed is close to the end of the sidings where the sidings connect to deceleration and acceleration lanes. Typically this will be close to a sharp 90 degree turn. In this case the crossing needed for road traffic is only a single one way lane of road traffic plus space for pedestrians and bikes in both directions. Only one thin HCORT lane has to be crossed over.

12. The system must extend out beyond the outer suburbs.

13. A range of different vehicles is designed for use with the system. These have the same width and maximum height but can be different lengths. Some of these vehicle types are purely designed for carriage of goods or special purposes.

14. Must allow specially designed vehicles to utilise the system where the vehicle also has the ability to drive on normal roads. i.e. Dual mode vehicles.

15. The overall speeds of the system, particularly the speed of vehicles on the main HCORT freeways (expressways) are faster than those normally seen on metropolitan transport. Higher speeds have the following advantages:

16. Speeds envisaged for the system are as follows:

17. Users are able to implement virtual trailers or virtual trains, where the users control multiple carriages throughout a journey. Examples of this are:

18. When the virtual train concept is implemented to carry more people or to carry animals, there will be the availability of audio visual systems between carriages that allow audio visual conversations between passengers in different vehicles within the train. The operation and control of this would have several modes so that there were options to make it suitable for teachers with students or other groups of people.

19. Each vehicle designed for carriage of people will have a number of video cameras and microphones. The central control will have substantial video surveillance capability. Computers will be used to evaluate the audio video data to locate data that it recommends the central control people to review. For more information on this see the section entitled 'Rape Wagon'.

20. The vehicles are electric vehicles powered by battery. Power for charging the battery is provided at various places along the HCORT freeways and while parked at substations and overnight parking stations. At substations and other parking stations, inductive transfer is used. Along the HCORT freeways are short sections of catenary lines or supply rails which the vehicles utilise through a pair of collectors (trolley poles, small pantographs or bow collectors). Two supply rails/lines along with two collectors are needed due to the rubber tyres. While more research is needed as to the best place to put the supply rails/lines, it is likely to be below the vehicle, but it could also be to the side of the vehicle near ground level. Assuming that it is below the vehicle, the supply rails can be rails that have been set at a raised level above the ground. That is, there is no need for the wheels to run across them as they can always be placed away from any possible merge or diverge. Due to the problems of skin effect when the supply is AC, it is best not to conduct electricity through the whole rail. Rather the rail becomes a support for an electrical conductor which runs on the top or to the side of the rail. The collectors either rub against this conductor or roll along it with electric conductors that collect and conduct electricity to the vehicle. 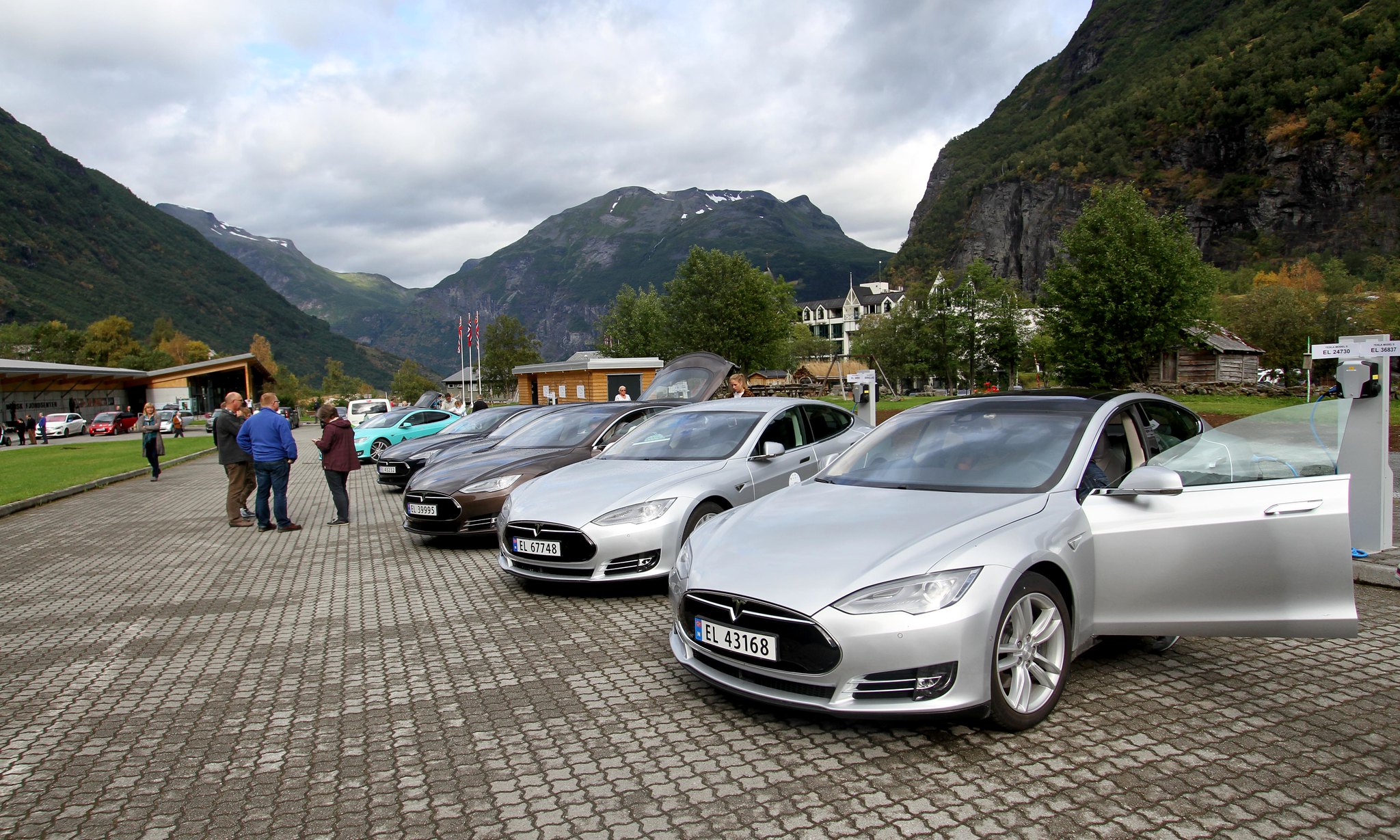 21. The sections of supply rails (catenary lines) on the route are turned on only when the vehicles are in contact with them and the vehicles are at or near full speed for that section. Note that these sections are longer than the length of a vehicle so there still is some possibility of, for example, an animal touching the track while a vehicle is on the track. These sections of the route are all well fenced off to stop any person coming onto the track. These sections of the route are away from overhead crossings or any other places where a person could access them or urinate on them as a vehicle goes past. A ground fault interrupter switch will switch off power if any person, animal or object touches one of the rails such that they or it conduct electricity to earth. The requirement for speed detection ensures that the supply rails are off in the case of a major event such as earthquake where people were being evacuated from stationary vehicles by walking along the guideway.

24. The track surface will be guaranteed free of bumps to a degree that allows vehicles to be lowered, compared to vehicles on ordinary roads. Dual-mode vehicles can use height adjustable suspension [18] to lower the ride height or ground clearance as they enter the HCORT system.

26. When HCORT freeways are at or near ground level or otherwise able to be accessed, they are fenced off. The fences will also enclose the acceleration and deceleration lanes. These fences will be substantive protection. That is, even if individuals decide to try to intrude into the guideway, the fences will make it beyond most people's capability.

27. Sidings may also be fenced off or be fenced off for part of their length. The fences may be substantive protection similar to those for HCORT freeways or relativly minor. The allowed vehicle speed allocated to that part of the siding will be related to the safety of that speed which will be mainly determined by the guideway fencing.