Crunch some numbers with the help of these projects!

DMX-84 is a hardware and software driver for TI-84 calculators to run DMX equipment such as DJ and theater lights. On the hardware side, it uses an Arduino Pro Mini to process commands from the calculator and to send the DMX signal. On the software side, it includes the Arduino firmware as well as the calculator driver, which is an Axe include file that implements the protocol for communicating with the Arduino.

The Arduino uses DmxSimple to handle the DMX output. It can support up to 512 channels simultaneously at the expense of refresh rate. By offloading the DMX output to the Arduino, the calculator's resource usage is greatly reduced so that it can still run intensive programs while operating the DMX. Otherwise, the already-underpowered calculator would optimistically be running at half speed.

This is My First Electronics Project ™. Please critique accordingly.

DMX-84 is a hardware and software driver for TI-84 calculators to run DMX equipment such as DJ and theater lights. It is currently written as an Axe include program, but it may be rewritten as an Axiom in a later version. The driver requires an Arduino-based adapter to transmit DMX. 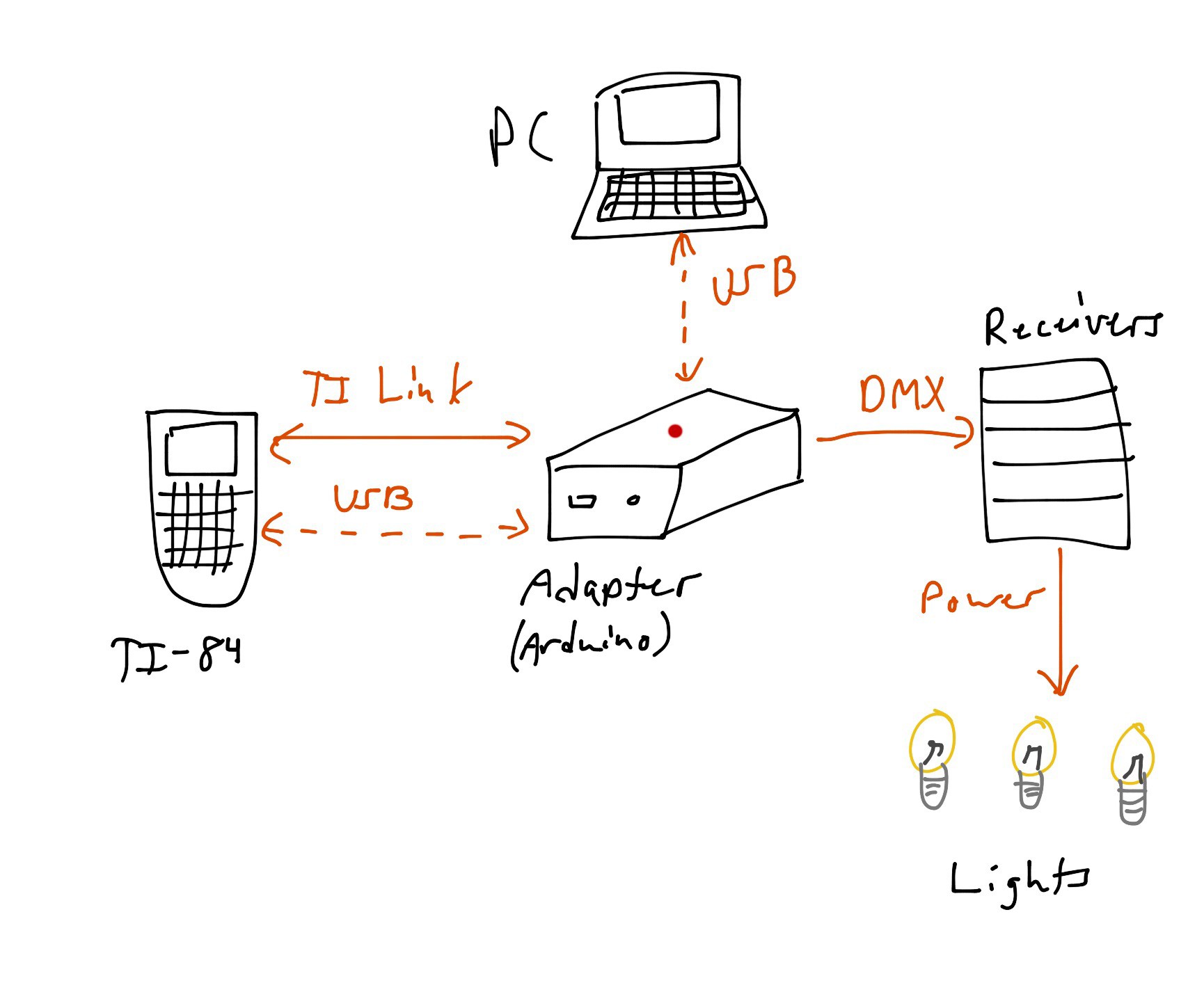 Here is a visual block diagram of how the project communicates.

The software driver on the calculator is an implementation of an application-specific protocol. The protocol is designed to be as lightweight as possible to minimize transmission time. To accomplish this, messages consist of a single command byte followed by optional parameters, wrapped in a standard TI link packet. For details on the protocol, see DMX-84/doc/Protocol.md.

The hardware driver is an Arduino Pro Mini 328 - 5V/16MHz produced by Sparkfun. I selected this board because its small feature set is perfect for this project, especially because it can be powered by USB Mini B from the calculator (or an external USB power supply). I also selected it because of its small size and relatively low price. The Arduino handles the calculator input and stores the channel values in memory. It transmits DMX packets at 250 kbaud using a slightly modified version of the DmxSimple library. Between the Arduino and the DMX Out jack is a transceiver that converts the +5/0V signal from the Arduino pin to a differential +5/-5V signal.

The adapter connects to the calculator through a combination of a 2.5mm audio jack for the serial data and a USB Mini B to FTDI adapter for power, serial debugging, and firmware updates. The Arduino can also receive power from any normal USB power supply, such as a computer or even a phone charger.

The Arduino transmits DMX packets over a 5-pin XLR female jack. An LED mounted on the enclosure indicates the system status (normal, error, debug, etc.). All of the hardware is housed in a small aluminum enclosure, painted black for theater use.

All other software used in the project, as contained in the repository, is open source under the GPL version 3.

I have no lighting fixtures reachable, but I recognize a few those who might permit me borrow a few for a video. Stay tuned, however remember the fact that it gets hard to locate time at some point of the semester and see the project here https://bestaxeguide.com/best-double-bit-axe/

Jasmine Brackett wrote 08/06/2014 at 16:56 • point
Hey Alex, you've tagged your project with 'TheHackadayPrize', but you haven't officially submitted. Did you want to? If so, check out Mike's post which has a video about how to submit, and what requirements you must have by August 20th to be considered for the next round http://hackaday.com/2014/07/26/4-minutes-to-entry/.

Also, did you noticed that this project was featured http://hackaday.com/2014/08/03/thp-entry-a-theatrical-lighting-controller-powered-by-a-calculator/. You might want to add a link to the post in the links section of the project.

Alex Cordonnier wrote 08/06/2014 at 22:13 • point
Jasmine, thanks for the heads up. I haven't officially submitted it yet because I still need to make an actual demonstration video. I'm hoping to get that done this weekend or next (whenever I can get access to a theater). And thanks for the link to the article. I saw it already but didn't think about putting the link on the project page.

Jasmine Brackett wrote 08/07/2014 at 17:14 • point
Hello Alex, you don't need the video to submit, so you should do it straight away. You do need the video, at least 4 project logs, and system design doc by August 20th to meet the requirements for the next stage. You should have received an email with more details about that. Good luck.

Alex Cordonnier wrote 08/06/2014 at 22:14 • point
I do plan to do a demo later. I don't have any lights on hand, but I know a few people who might let me borrow some for a video. Stay tuned, but keep in mind that it gets tough to find time during the semester.

Gas' wrote 08/03/2014 at 11:12 • point
Great project. I'm looking forward to see the Fibonacci sequence into the light. Cheap connectors is a bad idea. I never saw a Neutrik connector brocken.

Alex Cordonnier wrote 08/06/2014 at 22:14 • point
I looked at Neutrik connectors over a year ago, but I believe I bought this connector because the shipping was outrageous for Neutrik. This one seems pretty good so far, although the release button isn't the smoothest.