This interface is maintained here.

I have long wanted to build my own automation framework for my residence. All existing solutions were either expensive, poorly designed, underperformant, bulky or not versatile enough for what I needed. So I created the Moteino, a low power wireless Arduino compatible based on the popular Atmega328p chip, that accepts RFM69W/HW/CW or RFM12B transceivers on reverse, is of SD card size, is wirelessly programmable and can fit in very small enclosures.

Among other things, I wanted this system to be:

Once I tested a few revisions of the Moteino and I had a robust revision, I started conceptualizing several devices that would make it easy to monitor or control certain things like: 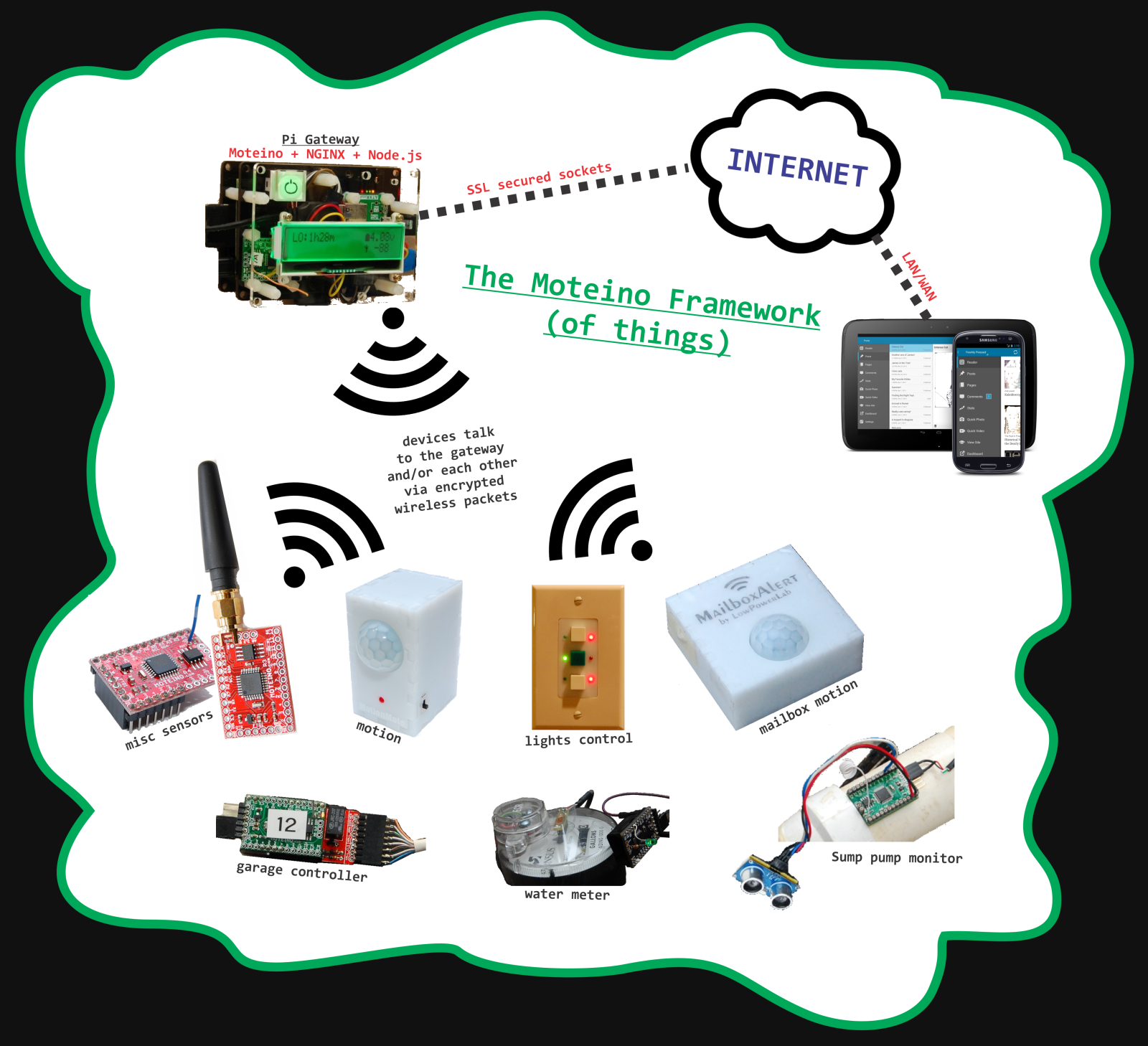 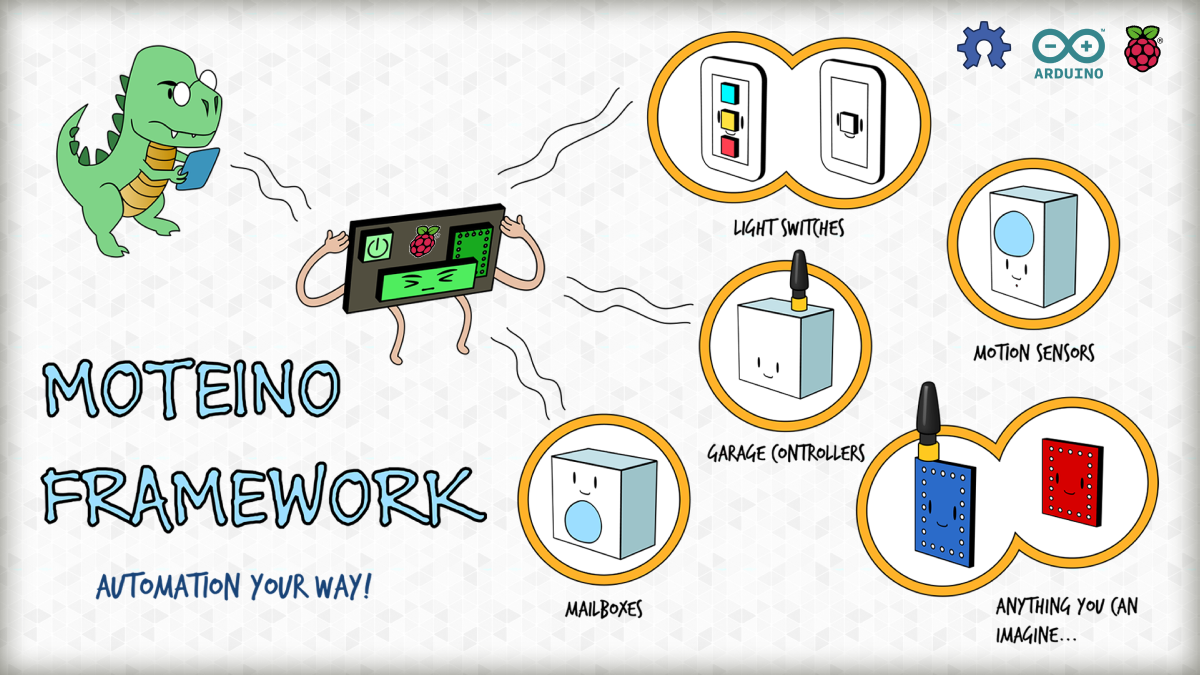 To make it truly useful, flexible and secure, I imposed several critical requirements for my Moteino automation framework:

I've spent several weeks developing the RFM69 library which I made free and open source, is now widely used in RFM69 based projects, and now also forked/used in several other THP entries. I'm very happy others found my work useful and I applaud project such as the Reactron Overdrive and PlantFriends which used Moteinos (or clones) and RFM69 library and took the time to give credit, I wish them all the best. Some of the components of this system have been in the works for many months and it's still a work in progress.

I've tested the popular Nordic NRF24L01 and their higher power modules. The non power module was hopeless and there's virtually no usable range on those modules. I know some will object at this statement but I've actually done the open air testing with each of these modules. I also started with RFM12B which was popular at the time but was not happy with the range and lack of features. I've finally settled on the RFM69 as the default choice since it has excellent range and penetration performance, is inexpensive, ideal size to fit Moteino, and has many nice hardware features like AES encryption, packet engine, signal strength reading etc. See this project log where I go into more details about the choice of transiceveiver and MCUs. Here's a video of me testing the RFM69 and comparing it to the older and still popular RFM12B:

This feature was important because many nodes are deployed to difficult to reach locations. SwitchMote was especially problematic. To make wireless programming possible I've developed DualOptiboot, an augmented Optiboot version which allows safe wireless programming. The way this works is like this:

This component is rather special because of the complexity and the time spent developing it (since late 2013). It's been through 2 major revisions and is now ready for prime time. UL certified components were used and safety factors were included to make it as safe as possible. The R2 revision of SwitchMote is much more robust as a design and also works at 250V. Here's an installed SwitchMote R1 concept demo: 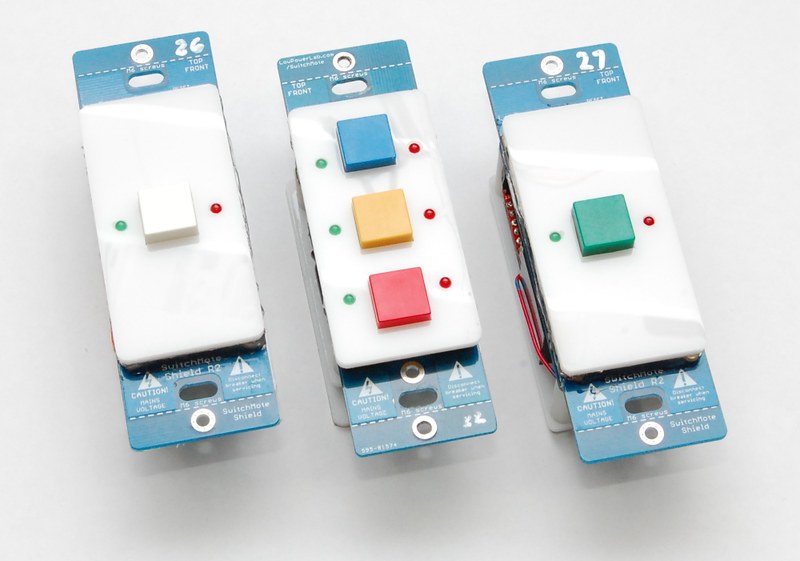 The design/refinement/improvement of the existing and new Moteino devices will continue to be logged here and at the lowpowerlab.com blog. Stay tuned for updates!