What if every time you run out of a product, the smart tag on it would instantly add it to your shopping list, at the touch of a button?

Scattered throughout the house there are small tags or panels called stokies. You can attach the tags to individual products or things that need them, while panels provide multiple buttons and are designed for places where multiple things are stored, like the pantry.
The system is very simple to use, for kids, the elderly or even visitors. The shopping list is updated dynamically, in real time and the system can also order things online for automated delivery.
The desire is to save time and eliminate errors, while keeping things simple, this is why the tags need to be product centric or use centric, instead of a centralized list or an app on your phone.
Applications are not limited to your home, the system can be used in offices, hospitals, warehouses and even supermarkets, basically everywhere you need to keep a sure supply of something.

Throughout the house there are tags (1) and panels (2) that allow you to mark one item as running low with a simple push of a button. Tags are generally dedicated to one item while panels contain multiple buttons for objects clustered in specific places. When a button is pressed the tags and panels communicate through the gateway(3) which provides access to the internet, reaching the server(4). This is where it all happens: a database keeps track of each tag of the users and applications provide extra functionality. Users(5) can consult the list(6) while shopping at the supermarket or even at home. Online stores(7) connected to the server can provide automatic delivery(8) of specific items. 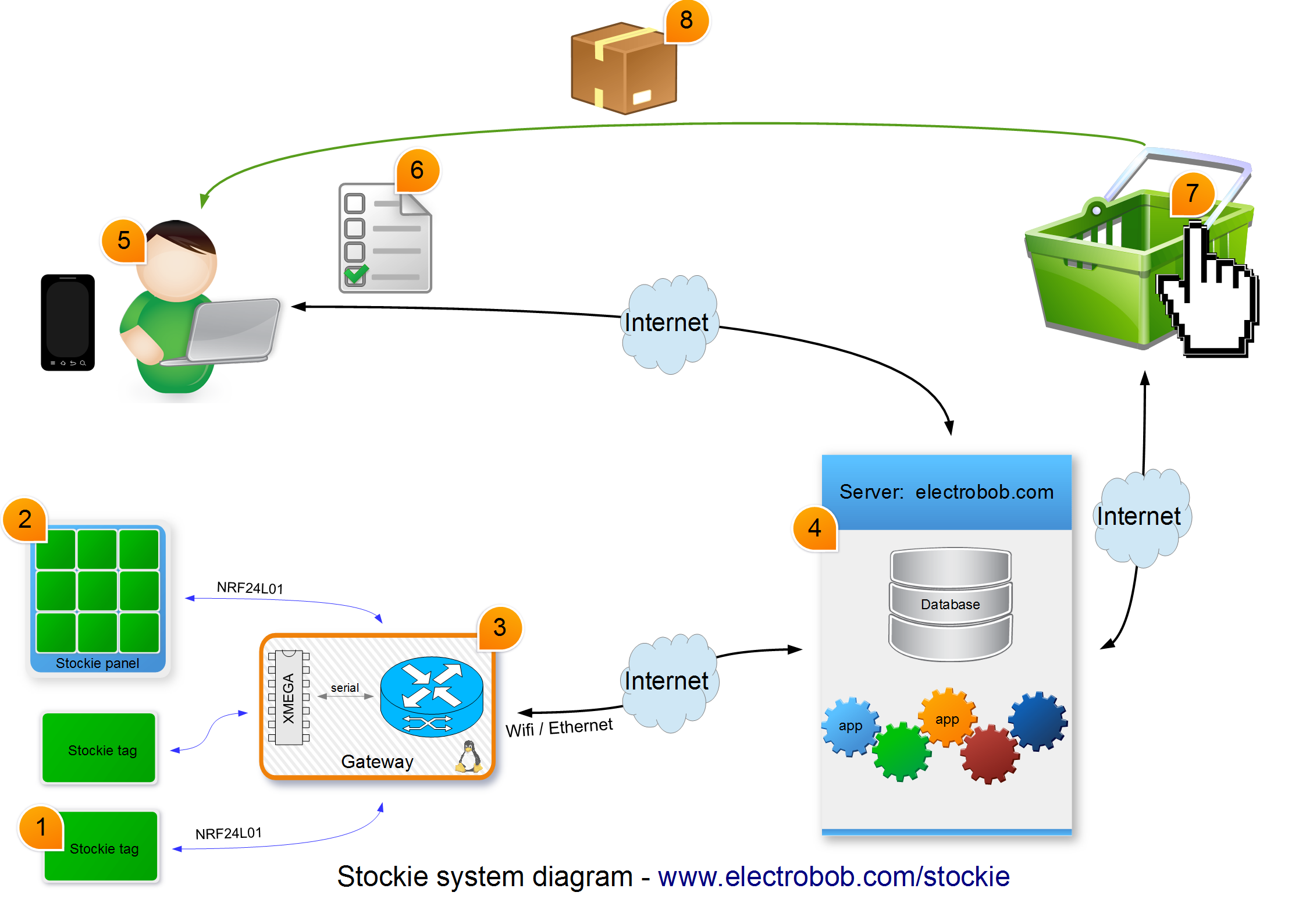 Applications are not limited to your home, the system can be used in offices, hospitals, warehouses and even supermarkets, basically everywhere you need to keep a sure supply of something. The tags can be placed corresponding to items on shelves so that you can alert about missing items and have them supplied immediately.

The inspiration arrived one early morning when I realized I was out of coffee, even though I had the intention to add it to my shopping list. I started pondering about ways to measure the available quantity of things around the house so that I could be alerted when something was running low. I instantly realized that this would be a fairly difficult task requiring different kinds of sensors which would prove complicated, costly and unreliable. But the real goal was actually easier to achieve: since almost everything is used by a person he/she can alert the system about things running low without the need of a high tech sensor.

I wanted the system to be tied to each individual product or right where it is used, such that the user can instantly notify of a low supply, without stopping the activity or having to remember to later add it to the list. Adding a tag for each product might be appear to be an expensive goal at first, but a quick check shows that I could build a one button tag for about 3 euro, even while buying parts in low quantity. The tag is even significantly lower in cost than the annual supply of most things. Still, tags with multiple buttons can be transformed into panels which I can place in cabinets or drawers where multiple things need to be monitored, further reducing the cost per item.

Hence, the first prototype is ready to be attached to the coffee machine. It will make sure I never forget to buy coffee, tea or milk.

As prototypes I will build tags, panels and the gateway. I have started with the small version, the tag, currently attached to the coffee machine, which is intended for single items, but can contain up to three buttons. The larger version, the panel, is intended for places where multiple items are stored, like the pantry, and will have a larger number of buttons.  Each item has its dedicated button, you are one touch away from adding it to your shopping list or even having your favorite online store directly deliver it.

The stockie tags need to operate from a coin cell for as long as possible. I have considered designing the tags with touch sensors instead of physical buttons but the sensors need to wake up periodically and consume power do do the readout*.  By using buttons, the microcontroller sleep current goes down to 0.2uA which is far less than the self discharge rate of the battery. CR2032 batteries are rated at 1-2%/year self discharge, which combined with the microcontroller consumption should have a life or around 50(yes fifty) years, but I highly doubt that will happen in real life.

denisa.glmn wrote 08/17/2014 at 22:22 • point
What about making adjustments in the tags/panels/list of products that should be marked? I guess that it does exist the posibility to remove or to add a product, for example replacing cow milk with almond milk starting next week, so you can mark it in the list, isn't it?

electrobob wrote 08/17/2014 at 22:32 • point
There are two sides: the text/picture that you put on the tag needs to be changed(if you want to) and the the software needs to know that it means something else.
To change what it means in software you go to your configuration webpage(or phone app) and select something else. The software can even assist you by letting you select which tag to change by pressing its button, that way there is absolutely no confusion to be made.

These are things I am still working on and will soon be updated on the project site. I am building other features as well, so stay tuned!

electrobob wrote 07/31/2014 at 14:51 • point
As the work is in progress I can understand some things not being clear, I will unfold details as things move on.
There is no need to have a tag for each item, especially in places where you have a lot of things together. For this I will make a device with multiple buttons, think of it more like a panel. The key here is the easiness of access: it should be as easy to press the button as it is to get to the product itself.

Paul_Beaudet wrote 07/31/2014 at 13:17 • point
The problem is explained well in the description. However, the solution could be illustrated a bit better. Do you mean to say there will be a tag for every item in the potential grocery inventory?

The 2016 Hackaday Prize
A portable, solar powered, handheld device that provides truly global messaging when you have no alternative.
Project Owner Contributor