An inexpensive & lightweight brain imaging device using near infrared spectroscopy of brain tissue; for use in video gaming, virtual reality and navigation.

To put it shortly, blood absorbs different frequencies of near infrared light depending on how much oxygen is being carried by its hemoglobin. Human bones are nearly transparent at these frequencies, so a head mounted device can measure the reflectivity of the outer layers of the brain right through the skull. The system can determine neural activity levels indirectly based off oxygen concentration, sort of like an fMRI.

The system is designed to shine one of two different infrared LEDs into the skull and measure the intensity of the reflected light. The two frequencies (730nm & 850nm) will be absorbed by hemoglobin with and without oxygen respectively. The reflected light will be captured by photodiodes, amplified, filtered and digitized with the ADC chip. The Atmega microcontroller will report results back to a host computer via USB. With 4 pairs of LEDs and 10 photodiodes clustered around them the system effectively has 16 measurement channels with 16 bits of resolution. 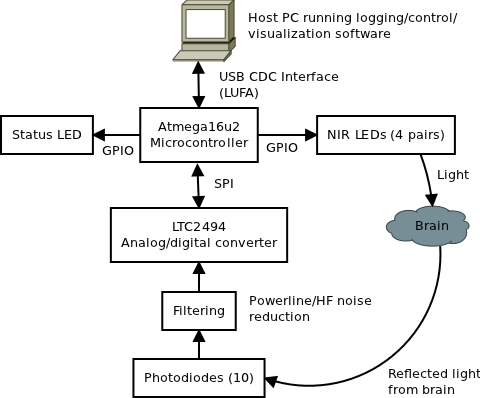 My project is released under GPLv3 and the LUFA library is provided under the LUFA license; both are available with my sourcecode in the github repository.

I have seen a similar product program on multiple project-sharing platforms. I mostly like the tischsets product.

Jeremy, Great Project.  Have you had a chance to bring the system up?  What layout did you use of your LEDs/Diodes?

Definitely interested in this, I've been looking into building one for myself. Very interested to see the effect of Nootropics and my tDCS machine.

naroom wrote 10/13/2014 at 02:40 • point
Infrared isn't just for measurement, it can also excite neurons. Neuroscientists use this to make a specific neuron start spiking.

So, be careful with the amount of IR power you're shooting into your skull. Depending on how much power you're pumping in, you may do more than just measure activity -- you might start causing it too.

AAYOTEE wrote 09/01/2014 at 15:24 • point
Like Kerem I also have experience working with NIRS (and fMRI for that matter), this time as a researcher at University College London. IMO the electronics are perhaps the most trivial part of this project - the critical areas will be light transmission and detection through the skull, holding the optodes static to prevent motion artefacts, and also the actual analysis (there's a fNIR package for SPM which is where I would start http://www.fil.ion.ucl.ac.uk/spm/). Bearing in mind that the signal changes due to functional hyperaemia in the cortex are quite small, you're going to have to have to figure out a way of actually measuring these changes above the noise threshold (hint: block design of tasks and rests).

dao888 wrote 09/01/2014 at 06:53 • point
Kudos man! Great project!! In my spare time when i'm not hacking i work as an MD specializing in neuroimaging [eg CT, MR] and of course have access to that equipment. Let me know if i can help you in any way with your project- i can't wait to see how it works for you!!

Kerem wrote 08/19/2014 at 11:04 • point
Cool project. We had built a single channel version of this for our Bachelor's degree thesis, it was also a battery operated, wireless system which allowed the subject to move during the measurements/experiments. The major problems with these systems are that the motion artefacts have a big influence and the absorption by the hair on the skin surface is high. The head probe moves around when the subject moves his/her head, this has to be taken care of in detail. The problem is the crooked surface of the human head, even when the probe is mounted on the head firmly, small movements are unavoidable and these small motions translate to high signal changes. The latter problem is the bigger disadvantage of NIR systems. The hair roots on the skin absorb a high portion of the light at these wavelengths, thus the energy cannot penetrate deep enough. Combined withthe motion artefacts, the SNR is reduced significantly. We had to use our system only on the forehead, left and right frontal lobes, which is a good place as one can reach the cognitive brain function, such as the dorsolateral cortex region etc... I have not seen any studies where they could use it on the areas with hair such as the motor cortex etc. I had seen a study on auditory cortexes of babies, but they have less hair...
Another optimization problem would be the placement of the source/detector pairs. The distance between the source and detector pair has to be optimized as well as the distances between the pairs for the multi channel system. But multiplexing in time should reduce cross-talk artefacts. There were also literature on this optimization.
What kind of photodiodes do you use? You have probably seen them but OPT101s are pretty cool for these applications. Also, if you can find them, there are multiple wavelength LEDs you can use to save space and complexity of circuitry. But they are quite expensive.
I hope you a good time with the project, it was really fun for us and it is very cool when you can see your own brain activation in the end by the device of your own design.

Jeremy Ruhland wrote 08/19/2014 at 01:44 • point
I'm using an atmega16u2, so its very similar to the chip modern arduinos use for usb/serial conversion. Since this chip alone can take care of everything I need I decided to lower costs by removing a prototyping board like the arduino from the project entirely.

bijtaj wrote 08/12/2014 at 02:59 • point
So, technically, the hardware of your project is based on that of simple pulse oximeters and photoplethysmographs... correct?

Jeremy Ruhland wrote 07/31/2014 at 23:10 • point
Yeah, the system won't generate data like the grayscale background image, just the data represented by the colored patches. With most functional brain imaging techniques a separate initial scanning method (such as CAT) is used to generate a map and data from the functional tests are used to fill it in, a bit like a coloring book.

Jeremy Ruhland wrote 07/31/2014 at 22:45 • point
Nope, its all based off a few papers I read. Expensive professional versions are used in the medical industry and the same technology is used in photoplethysmographs that you can buy off the shelf.

Mobile music player Because I can! ;)
Project Owner Contributor

Pomodoro is a time management technique where you spilt your task into smaller ~20 Minute sections. This device helps you to keep focused
Project Owner Contributor